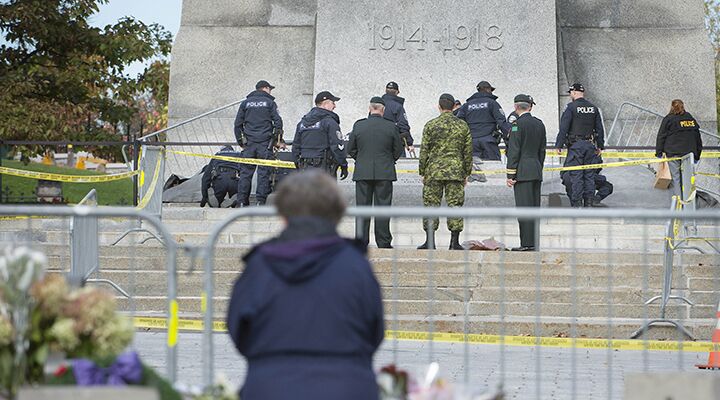 Two Canadian soldiers have been murdered in the last few days.

Shock gripped the nation of Canada this week following two successive terrorist attacks within its borders. Both attacks were carried out against Canadian soldiers by radicalized Canadians who had converted to Islam.

The first attack happened on Monday, October 20. Two Canadian soldiers in uniform were run down in a shopping mall parking lot in the city of St-Jean-sur-Richelieu, Quebec. The driver, 25-year-old Martin Couture Rouleau, fled the scene, but was shot and killed by police after threatening them with a knife. One soldier, Patrice Vincent, a 53-year-old Canadian Forces member with 28 years of service, was killed. The other soldier’s wounds were said to be less serious.

Police told reporters that they felt the attack was a “deliberate act” but did not know how far it was planned to go. Witnesses said they saw Rouleau’s car in the parking lot where the attack took place two hours before the attack actually happened. Police began to investigate Rouleau last June when they noticed he was beginning to “radicalize” himself on Facebook and other social media sites. He, along with 89 other Canadians, were being monitored for wanting to join militant groups. Rouleau had his passport seized last July when he tried to leave the country for that purpose.

On October 22, just two days after the first attack, Michael Zehaf-Bibeau, also a recent convert to Islam with “connections” to jihadists, drove to the War Memorial in Ottawa where he shot and killed Cpl. Nathan Cirillo, a reservist on duty at the memorial. Zehaf-Bibeau then hijacked an idling car and drove down the road to the Canadian Parliament where, after two gunfights with police, he was killed inside the Parliament buildings by the parliamentary sergeant-at-arms, Kevin Vickers.

According to police, Zehaf-Bibeau was not on the list of 90 Canadians being monitored, though he was in Ottawa at the time trying to obtain a passport to travel to Libya or Syria. Zehaf-Bibeau was considered a “high-risk traveler” and had his passport seized. Although his motives were not clear, police said they felt that the “passport issue was central to what was driving” him.

Martin Couture Rouleau, 25, was shot and killed by police after running over two Canadian soldiers, killing one.

These attacks are unprecedented in Canada. For the nation generally characterized by politeness, love of hockey and maple syrup, the attacks took everyone by surprise. Political leaders quickly expressed solidarity and strength to calm the troubled public. Prime Minister Stephen Harper hugged parliamentary opposition leaders in a show of unity. Heart-rending images and political cartoons begin to surface as Canadians rallied together after the attacks. Western leaders voiced their support for Canada. Multiple pledges were made that Canada would not be intimidated or cower in fear.

Following the first attack, Stratfor released a report highlighting the attack, but played it down as a grassroots, ineffective event. It said the attack was “a sign of weakness rather than of strength and highlights the constraints jihadist groups face as they try to project their terrorist capability in the post-9/11 world” (October 21). The report praised the efforts of law enforcement officials in Western nations to thwart coordinated, skilled attacks.

While heightened security measures have undoubtedly played a huge part in stemming off greater terrorist attacks than these in Canada, Stratfor’s report is somewhat reflective of the dangerous thinking in the West. While Islamic State has made increasing calls for jihadists to carry out attacks in America, Canada and Europe, many people are dangerously unconcerned with its threats. Like Stratfor, they do not recognize how threatening the viral hate is that radical Islam has toward the West.

Both attacks came shortly after Islamic State released a video calling for attacks on Canada and other Western nations. On September 21, a 42-minute audio speech by an Islamic State spokesperson was released urging jihadists to kill civilians and soldiers alike in Canada: “Rely upon Allah, and kill him in any manner or way however it may be. Do not ask for anyone’s advice and do not seek anyone’s verdict. Kill the disbeliever whether he is civilian or military, for they have the same ruling.” The video went on to list a number of gruesome, lone-wolf measures to take, including running people down with cars.

The Stratfor article said these lone-wolf attacks are “precisely the type of attack[s] we expect from grassroots jihadists, who are eager to fight but generally lack the terrorist tradecraft required to conduct a more sophisticated attack.” It concluded: “Ultimately, grassroots jihadists will continue to pose a persistent, though limited, threat.”

Are these threats “limited”? Are such attacks “a sign of weakness” as Stratfor claims? Consider the outcome of these kinds of attacks. Following the attack in Ottawa, soldiers were warned not to wear their uniforms in public except on official duty. Rear Adm. John Newton, commander of the Maritime Forces Atlantic and Joint Task Force Atlantic, advised soldiers in an e-mail to “restrict movement in uniform in public as much as possible.” The same order was given in Britain last year after British soldier Drummer Lee Rigby was hacked to death in broad daylight by a radicalized jihadist with a meat cleaver. Following the Boston Marathon bombing in 2013, the entire city was shut down in an effort to catch the suspects. Who is it that is really showing signs of weakness? These lone-wolf attacks have caused panic and the retreat of entire cities and nations.

Canada was coming off the throes of a bitter debate over whether to commit military aircraft to the battle against Islamic State when these two attacks took place. Harper wanted Canada to take part militarily in the United States-led coalition against Islamic State. Opposition leaders of the Liberal and New Democrat parties opposed Harper’s move, wanting to simply offer humanitarian support. This debate took place after Canada had been directly threatened by Islamic State, yet some politicians did not think it necessary to confront the threat.

The reality is that it’s the West that is showing signs of weakness. Instead of confronting the menace of Islamic State head on, Western nations led by the U.S. have launched a bombing campaign in the hopes that it will stop the terrorists. Nobody wants to be sucked back into a long Middle Eastern war.

As the Trumpet has highlighted often, the West simply lacks the will to win. As editor in chief Gerald Flurry wrote in 2003, “Superpowers cannot survive in this evil, warring world without the will to wage long, hard wars. This is the real world in which we live; fantasies won’t change that reality.” Canadian politicians’ lack of desire to get involved militarily against Islamic State proves they will never conquer terrorism. Because of that, you can expect more of these attacks in the future.

Be sure to read our article “Why We Cannot Win the War Against Terrorism.” It shows the underlying reason why after 13 years of a global war on terror we are still living in fear of terrorist attacks. Also, request our free book The United States and Britain in Prophecy to understand why it is nations like Canada, the U.S. and Britain that are suffering these terrorist attacks. There is a powerful reason, and you need to know it.