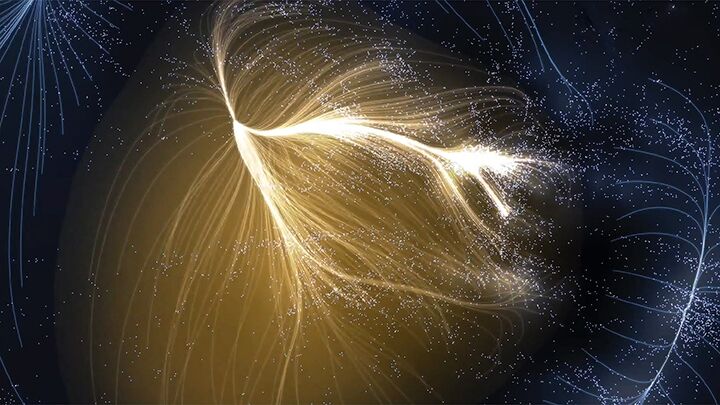 How does the universe look to God? That’s a question humans can never answer. No doubt our awesome Creator can zoom in to count the hairs on every individual’s head, while simultaneously viewing the vastness of His entire creation. Humans can try to view hairs and even microscopic cells, but we can see only a fraction of the universe. As tiny as we are, it’s impossible to get a sense of its large-scale structure.

But physicists are trying. And some of their latest discoveries may give us a glimpse. One of these is Laniakea—a cluster of clusters of galaxies.

Trying to envision just one galaxy exhausts the human imagination. If you took just one second to look at each of the 300 billion or so stars in our Milky Way galaxy, it would take nearly 10,000 years to view them all.

But our galaxy is just a tiny part of a much larger structure. We used to think that structure was the Virgo Supercluster—a kind of cluster of clusters, containing many thousands of galaxies in a region of space 100 billion times larger than our Milky Way.

Laniakea is a Hawaiian word meaning “immeasurable heaven.” It’s an apt name. In Laniakea, around 100,000 galaxies all flow together, drawn slowly together by the pull of gravity. The Milky Way is on the edge of this flow.

Laniakea, then, is big. But it is far, far from being the biggest known cosmic structure. That honor goes to something discovered last year, the Hercules-Corona Borealis Great Wall (Her-CrB GW). That’s a rather cumbersome name for a truly awesome structure: a wall of galaxies that stretches one tenth of the way across the entire observable universe. At 10 billion light-years across, it is impossibly big—literally. Under the current big bang model there is no way something so huge can exist.

If clusters of galaxies were formed, as cosmologists assume, by mere random fluctuations after a big bang, then on a large enough scale the universe should look the same. When tossing a coin, you wouldn’t be surprised to get three or four heads in a row. But do it 1,000 times and you’d expect the distribution of heads and tails to be almost identical. Finding this Great Wall is like getting 100 heads all in a row. It’s a massive signal that there’s something more than randomness and chance at work.

The second impossibility is its age. According to current theories, we are seeing what the Great Wall looked like when the universe was only 3.8 billion years old. In the current big bang model, it is impossible for anything that big to form in such a “short” amount of time. Istvan Horvath, one of the scientists who discovered it, said he has “no idea” how it could have evolved.

This, then, may be the zoomed-out, God’s-eye view of the universe. Individual galaxies are mere specks of dust, pinpricks of light, grouped into filaments that entangle together and become glowing strings. These reach out to form gigantic structures that frame great voids, holes in space millions of light-years across—in an unimaginably huge “cosmic web.”

How big is this web? The observable universe is 93 billion light-years across. But we have no idea how much lies beyond what we can see from our vantage point.

What is it all for? Why did a Creator make this—and why so big? God didn’t need a universe for Himself. He made it for man. God promises this as the inheritance of humanity. Hebrews 2:8 states that God has put “all things in subjection” under man. The Moffatt Bible translated “all things” as “the universe.” The verse goes on to say that God has left “nothing that is not put under him.”

In his book The Incredible Human Potential, Herbert W. Armstrong wrote, “In other words, for those willing to believe what God says, He says that He has decreed the entire universe—with all its galaxies, its countless suns and planets—everything—will be put under man’s subjection.” Of course, as the verse goes on to say, the endless universe has “not yet” been put under us—but it will be.

Hebrews 2:8 is not an isolated scripture. The Bible plainly reveals that God’s plan for mankind includes the whole universe. That cosmic web, if that is indeed the true structure of the universe, is our inheritance. No wonder the Apostle Paul wrote, “For I reckon that the sufferings of this present time are not worthy to be compared with the glory which shall be revealed in us.”

Much of what the Trumpet warns about—race wars, child sexual abuse and nuclear war, for example—is deeply sobering. But this vision and hope puts all that suffering in context. The great God who created all this—is preparing man for this inheritance.

“In this world full of terrorism, we need our universe dream,” wrote the Trumpet’s editor in chief, Gerald Flurry, some years back. “We need to see the stupendous possibility and the eternal majesty. … Nothing can stimulate our imagination like comprehending our universe potential! Nothing” (February 2004).

Our free book The Incredible Human Potential can help you prove for yourself what the Bible says about this vision. And our free, full-color booklet Our Awesome Universe Potential will help bring this vision alive to you.