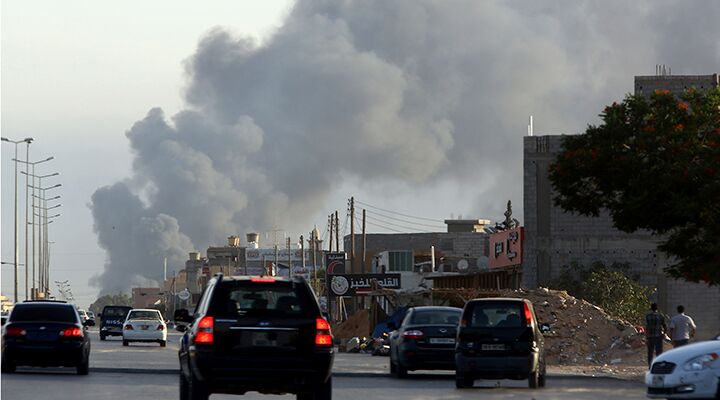 The State Department evacuates the U.S. Embassy in Tripoli amid escalating violence.

In 2011, the United States went to war against Colonel Muammar Qadhafi’s regime in Libya, supposedly in defense of the Libyan people.

President Obama justified the attack by stating on March 28 that year, “We knew that if we wanted—if we waited one more day, Benghazi, a city nearly the size of Charlotte, could suffer a massacre that would have reverberated across the region and stained the conscience of the world. It was not in our national interest to let that happen. I refused to let that happen. And so nine days ago, after consulting the bipartisan leadership of Congress, I authorized military action to stop the killing and enforce U.N. Security Council Resolution 1973. We struck regime forces approaching Benghazi to save that city and the people within it.”

He had to act, he said, in order to prevent a massacre from happening—in Benghazi, of all places! For seven months, a U.S.-led bombing campaign smashed Qadhafi’s forces. This bombardment raining down from above allowed the rebel forces on the ground—radical Islamists—to go on the offensive. They rounded up Qadhafi loyalists, including many civilians, and conducted mass beatings and killings.

Yet the United States turned a blind eye to these atrocities. Then, Libya’s rebel forces got hold of Colonel Qadhafi. They proceeded to sodomize him and parade his beaten and bloodied body through the streets en route to his public execution. The dictator’s lynching was recorded and distributed worldwide via YouTube.

But instead of pausing to reassess its strategic alliance with these so-called liberators of Libya, the United States just laughed off the grisly killing.

The tyrant may have been brutally beaten, sexually assaulted and shot dead—but Libya was now on the road to full democracy! Why should Libya’s “freedom” march be hindered by a messy war crimes investigation? Or so the thinking went. President Obama said Qadhafi’s death marked the end of a long and painful chapter in Libya, and that the people in the “new and democratic Libya” now had a chance to determine their own destiny.

Our brave pilots have flown in Libya’s skies, our sailors have provided support off Libya’s shores, and our leadership at nato has helped guide our coalition. Without putting a single U.S. service member on the ground, we achieved our objectives, and our nato mission will soon come to an end.This comes at a time when we see the strength of American leadership across the world. We’ve taken out al Qaeda leaders, and we’ve put them on the path to defeat. We’re winding down the war in Iraq and have begun a transition in Afghanistan. And now, working in Libya with friends and allies, we’ve demonstrated what collective action can achieve in the 21st century.

This is what the leaders of the United States of America were saying about the “new Libya” in 2011.

Now compare that to what we here at the Trumpet were saying. My father wrote in October of that year: “Now America and the West have paved the way for another Iranian victory in Libya. We are rejoicing about the overthrow of Libya’s Muammar Qadhafi, while we should be mourning. Libyan chaos is now the ideal setting for Iran to bring that nation into its deadly terrorist web. The government that replaces Qadhafi will be a thousand times worse.”

Fast-forward less than three years later to today, and the violence and bloodshed in Libya is so bad that Americans are fleeing the country. On July 26, the United States decided to shut down its Embassy in Tripoli. The latest travel advisory issued by the State Department says it all:

The security situation in Libya remains unpredictable and unstable. The Libyan government has not been able to adequately build its military and police forces and improve security following the 2011 revolution. Many military-grade weapons remain in the hands of private individuals, including antiaircraft weapons that may be used against civilian aviation. Crime levels remain high in many parts of the country. In addition to the threat of crime, various groups have called for attacks against U.S. citizens and U.S. interests in Libya. Extremist groups in Libya have made several specific threats this year against U.S. government officials, citizens and interests in Libya. Because of the presumption that foreigners, especially U.S. citizens, in Libya may be associated with the U.S. government or U.S. ngos, travelers should be aware that they may be targeted for kidnapping, violent attacks, or death. U.S. citizens currently in Libya should exercise extreme caution and depart immediately.

This is Libya today—just three years after America’s leaders rejoiced over Qaddafi’s overthrow. You won’t see accurate coverage on Libya’s radical turn in the mainstream media, so remember where you read it first.

Read Libya and Ethiopia in Prophecy and watch “Benghazi Terrorist Attack Fulfills Prophecy” for more about this disastrous turn of events in Libya.