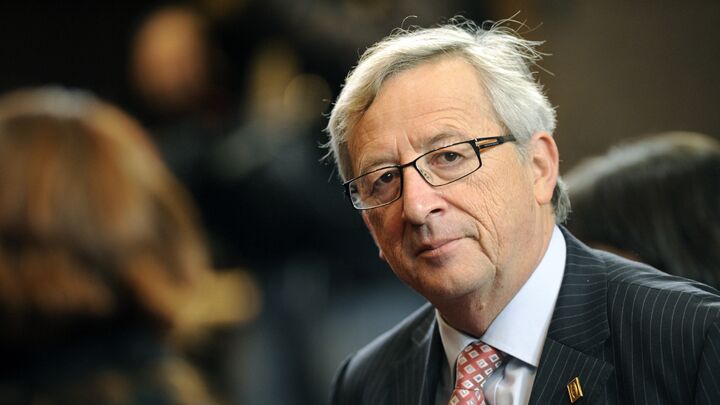 Jean-Claude Juncker is on his way to the EU presidency, which means Britain is on its way out.

“I am for secret, dark debates,” former Luxembourg Prime Minister Jean-Claude Juncker said a few years ago. This is a man who not only has been caught lying and admitted to lying, but also has actually said that in a position of leadership, “when the going gets tough, you have to lie.”

“Monetary policy is a serious issue,” he said. “We should discuss this in secret.” He continued: “I’m ready to be insulted as being insufficiently democratic, but I want to be serious.”

When the people of France and the Netherlands voted on whether or not to accept the European Constitution, Juncker made clear he didn’t care what they thought. “If it’s a yes, we will say ‘On we go,’ and if it’s a no, we will say ‘We continue,’” he said.

This is a man who won’t let anything—truth, democracy or principles, for example—get in the way of his dream of a federalized Europe.

This is the man who is about to become president of the European Commission—one of several heads of the European Union—after winning the approval of the vast majority of EU leaders on June 27.

His rise to power has caused a bitter and emotional argument between Britain and the rest of the European Union, and has pushed Britain closer than ever to quitting.

Jean-Claude Juncker is despised in Britain; he stands for everything Britain hates about the EU. Every major political party in Britain opposes his candidacy.

Even supporters of Britain’s membership in the EU now question whether they belong in this union. Times columnist and former M.P. Matthew Parris wrote that “Britain is heading for the exit. Something seriously impressive has to be achieved to change our course.”

“If people like me who have wanted nothing to do with our homegrown anti-EU crazies have come close to despair over the Juncker episode—close to that ‘Oh sod it, we’re out of here’ moment—then there are potentially millions more,” he wrote.

Telegraph columnist Iain Martin concluded that if Juncker was chosen, it “will be a historic disaster on a grand scale which makes Britain’s exit from the European Union very likely. And I speak as someone who has been for reform and staying in the EU if possible.”

His colleague Tim Stanley wrote much the same thing: “If Jean-Claude Juncker is chosen to be the next president of the commission, Britain will eventually have to leave the European Union.”

“Once a relationship reaches such an impasse, it becomes obvious that it is basically over,” Telegraph assistant editor Jeremy Warner wrote. “We are already at the separate bedrooms stage; moving out of the shared home altogether cannot be far behind.”

It’s not just Telegraph writers sounding the warning. Left Foot Forward, one of Britain’s most prominent left-wing blogs, wrote, “Britain is … much more likely to leave the EU in the next Parliament with Juncker as president of the Commission.”

Those who are more enthusiastic for a British EU exit are even rejoicing over the prospect of Juncker’s victory. The Telegraph’s chief political commentator, Peter Oborne, wrote: “The president we Euroskeptics need is someone with no international reputation and zero credibility. An inert, incompetent and useless figure capable of turning the EU into a laughingstock around the world …. The president we want is Juncker!” Why? A Juncker presidency could be the quickest way of turning Britain against the EU.

The real importance of this comes not necessarily from Juncker himself, but as a test of how easily Britain can get its voice heard in Europe. Prime Minister David Cameron promised to hold a referendum on Britain’s EU membership in 2017. He promised to negotiate a new relationship with Brussels before this date. The nation would vote on whether to leave the EU or to accept the new renegotiated membership.

Mr. Cameron did everything he could to block Juncker. He failed. So what kind of renegotiation deal can he get? Now, concessions are extremely unlikely.

Most of the polls over the last year or so have given the same message. A meaningful negotiation could be the only thing that will keep Britain in.

Already it looks like that’s not going to happen. Conservative mep Daniel Hannan says that “David Cameron has given up even asking.”

“Seventeen months ago, in his Bloomberg speech, he was still holding out the prospect of significant unilateral repatriations of power,” Hannan continued. “Now all that has been dropped, and he has produced a list of seven paltry changes, few of which would require an intergovernmental conference, and all of which have been enthusiastically endorsed by Nick Clegg and Ken Clarke on grounds that they won’t change anything.”

Europe also shows little sign of giving any ground to Britain. One European commissioner reportedly said, “We don’t include the UK in our plans anymore. We assume you’re leaving the EU.”

In order to substantially renegotiate its relationship with the EU, Britain would need the approval of every EU nation—a tall order. In a private conversation this spring, Poland’s then finance minister, Jacek Rostowski, bluntly dismissed Britain’s chances of getting any concessions, according to a transcript leaked by Polish magazine Wprost on June 23. Talking to Polish Foreign Minister Radoslaw Sikorski this spring, Rostowski allegedly said, “For the Polish government to agree [to some kind of renegotiation], someone will have to give us some mountain of gold.”

This conversation took place even before the row over Juncker. That argument has turned Britain further against the EU, but it is also turning the EU against Britain.

The Juncker row has become yet another case of Britain standing alone against all of Europe. Initially it seemed that Britain had plenty of allies in the anti-Juncker campaign. By the end, only Hungary stood with the UK.

German Chancellor Angela Merkel apparently even promised to support Cameron and oppose Juncker. “Don’t worry about the spitzenkandidaten thing, David, I’ll take care of it,” Merkel reportedly said last year—referring to the process that has resulted in Juncker’s appointment. “It’s under control.”

It wasn’t. Instead, Chancellor Merkel changed her mind, and then proceeded to strip away Britain’s allies.

Mr. Cameron’s decision to continue standing alone has not won him any friends in Europe. German public opinion turned especially hostile. “Britain is important to be sure,” wrote German newsmagazine Spiegel in an editorial on June 2. “But the choice between a more democratic EU and Britain’s continued membership is clear.” Somehow it concluded that appointing a man 92 percent of EU citizens have never heard of as EU president is democratic. “Europe must choose democracy,” it concluded.

Handelsblatt wrote, “Whoever listens to the Brits in the debate about the personnel for Europe’s top posts is allowing the notorious spoilsport to take charge of the game.”

Both left- and right-wing German politicians have spoken out. “It would be a farce if Europe were blackmailed by someone who does not understand Europe and who campaigns against Europe in order to improve his national profile,” said the general secretary of the left-wing Social Democratic Party. Meanwhile a senior M.P. from the right-wing Christian Social Union said, “We will not be blackmailed by David Cameron. Juncker had a majority and if the British want to walk alone and get out of the EU, well … be my guest.”

In recent days, the German press has backpedaled somewhat in its outbursts toward Britain—perhaps because it’s realizing just who it’s getting. But there’s no denying the row has caused bad feelings on both sides.

The events of the last few weeks prove that Europe will not make any significant concessions to Britain. This puts Britain on a direct course out of the EU.

One of the keynote forecasts of Herbert W. Armstrong—founder and editor in chief of the Trumpet’s predecessor, The Plain Truth—was the arrival of a 10-nation superstate in Europe. Based on Bible prophecy, he knew it would be “the soon-coming resurrected ‘Holy Roman Empire’—a sort of soon-coming ‘United States of Europe’—a union of 10 nations to rise up out of or following the Common Market of today” (Mystery of the Ages). But “Britain will not be in that empire soon to come,” he wrote.

Britain has always been on the fringes of Europe, and not just geographically. It never really embraced the European project.

In many ways, Mr. Armstrong’s prediction has already proven true. It is obvious Britain will not be part of any kind of “core Europe” that will emerge from the EU. While many in the eurozone talk about drawing closer together, no one is suggesting that Britain will be part of that.

Today, that 10-nation superpower is closer than ever to appearing on the world scene. At the same time, it is more obvious than ever that Britain will not be part of that power. These are both trends Mr. Armstrong forecast decades ago—he predicted the rise of this European power in the ’40s and ’50s, and proclaimed Britain would not remain part of it even as Britain joined the Common Market in 1973.

For more information on what other soon-coming world events Mr. Armstrong forecast, read our free booklet He Was Right.