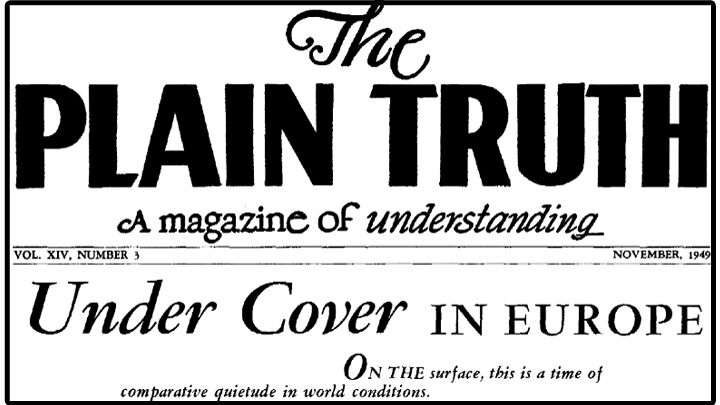 Sixty years later, that sounds pretty far-fetched. Everyone knows there was no “secret German Army.”

But over the past couple of years, more and more evidence has seeped out of the German government—evidence revealing a post-war underground Nazi movement. We’ve learned that Germany’s finance ministry and foreign ministry were thoroughly infiltrated by former Nazis. We’ve discovered that its intelligence service let men like Adolf Eichmann get away.

Then this May brought the most shocking revelation yet: There literally was a secret Nazi army.

According to papers released by Germany’s intelligence agency, this army could have fielded 40,000 men in the event of war. It had 2,000 officers—including lieutenants and major generals from Hitler’s army.

Germany’s Spiegel newsmagazine analyzed the papers and determined that this army had high-level government connections and possibly an even wider Nazi network.

The group began in 1949. Officers who had served in the German Army during the war were worried about how the nation could defend itself if the Soviets invaded. Although the Allies outlawed all “military-like” forces under penalty of life imprisonment, these officers decided to build the nation a secret army.

This army faded from the scene in the mid-1950s, when Germany established an official army, the Bundeswehr. But many of those who had led this secret army went on to hold prominent positions in the new force. The army’s organizer, Albert Schnez, a colonel in Hitler’s army, became a lieutenant general in the Bundeswehr and inspector of the army. He also was closely associated with German Defense Minister Franz Josef Strauss.

Spiegel reports, “Statements by Schnez quoted in the documents suggest that the project to build a clandestine army was also supported by Hans Speidel … and Adolf Heusinger.” Speidel became the nato supreme commander of the Allied army in Central Europe, and Heusinger was the first inspector general of the Bundeswehr.

Another key figure was Anton Grasser, a general in World War ii who became an inspector general at the German interior ministry in the 1950s. Using this position, he made sure that the secret army could access the equipment and munitions of the German Police tactical units in an emergency.

In fact, Spiegel reveals that this secret army’s connections went right to the top. In 1951, Schnez met with Reinhard Gehlen, the head of Germany’s intelligence service. The intelligence service reported that there had “long been relations of a friendly nature” between the two men.

Gehlen passed on information about the group to German Chancellor Konrad Adenauer—who allowed the army to continue. The chancellery asked Gehlen to “look after and to monitor the group.”

Spiegel says the papers indicate that Adenauer informed the leader of Germany’s left-wing Social Democratic Party, as well as the Americans about the existence of the army.

If that is indeed the case, America did nothing to uphold its law against “military-like” forces. But this is not too surprising. In 1950, American and German officials had talked about setting up this kind of force themselves—“gathering members of former German elite divisions in the event of a catastrophe, arming and then assigning them to Allied defense troops.”

Tip of the Iceberg

The documents analyzed by Spiegel indicate that Schnez’s secret army could be only the tip of the iceberg. Even for that group, little has been recorded. Schnez took his secrets to his grave. None of his secret army’s documents or paperwork have ever been found. The only information about it comes from Gehlen’s secret service documents, which presumably only include information that Schnez willingly told the government. Even this limited information is surprisingly inadequate: The documents don’t even reveal when—or if ever—the organization was wound down.

And Schnez’s army was not the only such group. America funded a couple of far-right groups, the League of German Youth and Technischer Dienst (Technical Service), which Schnez worked with. “Schnez, it seems, had no qualms whatsoever associating himself with former Nazis,” Spiegel noted.

Some of the groups Schnez interacted with we still know very little about. Spiegel reports that it received access to U.S. documents which show that Schnez held talks with SS war hero Otto Skorzeny. The documents state that Skorzeny was setting up a similar army, but give few details about it.

In fact, German intelligence was more worried about Skorzeny’s group than Schnez’s. As the authorities tried to decide whether to confront Skorzeny, the secret service suggested consulting “the SS”—saying that the Nazi organization “is a factor and we should sound out opinions in detail there before making a decision.”

Mr. Armstrong did not have spies at the German chancellory, microphones in the White House or any other secret sources of information. Instead, he carefully watched world news, and he evaluated it according to the prophecy in your Bible! These prophecies gave him insight no one else had. It meant he could foresee a development that even the German secret service didn’t fully document.

Much of Mr. Armstrong’s forecasting was proven accurate within his own lifetime. But since his death in 1986, events are proving right all the more.

The Trumpet follows his same formula of news watching guided by Bible prophecy. It is a formula that works, and you can prove it. For a comprehensive review of Mr. Armstrong’s analysis, request our free booklet He Was Right.