A cautionary tale of identity theft 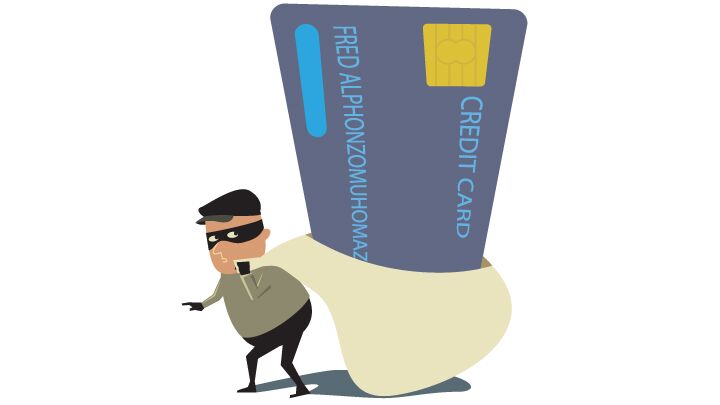 A cautionary tale of identity theft

What if one morning you woke up, looked in the mirror and discovered that you weren’t you anymore! You were merged with some stranger. Your identity was combined with that of a bald, 6-foot-2, middle-aged man with a mustache and a penchant for flashy watches and expensive computers.

Suddenly, your real name no longer matters. You have become Fred AlphonzoMuhomaZipski.

At least, according to your bank, the big three credit rating agencies and the irs, that’s who you are.

It began with an innocent mistake you made five years ago. You created a Facebook/Instagram/Twitter/online dating account. You typed in a bunch of information about yourself: age, hometown, photo. You made a few posts, then forgot about it.

A few months back you went to a baseball game. Someone there randomly snapped your picture with his smartphone. You never even saw a flash.

Bam! Within seconds, a complete stranger knew enough about you to steal your life.

By the time the Dodgers finished drubbing the Cubs, your bank accounts, credit cards, auto loans, utility bills and credit history were no longer yours alone. They were also Fred Alphonzo’s, because he now had access to them all.

And Fred Alphonzo is an entrepreneur. When he is done using you, he will sell a share of you to someone else. After a few days, Fred Muhoma from Indonesia has merged himself into your profile, as has Fred Zipsky from Poland.

You become a hybrid Fred AlphonzoMuhomaZipski. These anonymous thieves can create fake birth certificates, licenses and Social Security cards using your information. They can apply for and receive government benefits in your name. They can create fake identities and passports to sell to illegal aliens trying to cross the border and live in the United States. They can obtain jobs and abuse the healthcare services in your name. They can open bank accounts, credit cards and take out mortgages. They can file taxes and even claim your dependents on their returns. They can trash your credit rating.

Digitally, they become you.

How is this possible?

NameTag is a new facial recognition smartphone app that lets users match a face to online and public records. It became available in January. The app whizzes through social media sites like Facebook and thousands of entries in the National Sex Offender Registry. It will soon be able to compare faces with photos from online dating profiles.

Google also recently purchased its own facial recognition technology, which it will eventually integrate into its products.

By the time you finish reading this article, 150 of your friends, neighbors and fellow citizens will have had their personal information violated and abused for some sort of monetary gain—one identity stolen every two seconds.
Facial recognition means no more anonymity. All it takes is a smartphone with a camera—or before long, Google glasses, which include a wearable camera activated by eye movement.

Seven seconds after he snapped your photo, the first Fred knew exactly who you were. And from your public Facebook page or other social media site, he found out your name, your age, where you were born, who your friends were, your parents’ names, and the name of your miniature Doberman.

Although there are many ways to steal someone’s identity, this is the new frontier of identity theft.

Abagnale should know. He was once considered the world’s greatest con man and was the subject of a popular movie, Catch Me If You Can. After he was finally caught, the government offered a lenient sentence if he would help law enforcement bust fraudsters. Now he is trying to atone for his sins by helping people protect themselves from predators.

With the advancement of technology, identity theft is becoming cut-and-paste, says Abagnale.

“[I]t’s about 4,000 times easier today to con people than when I did it,” he told Wired. “To forge a check 50 years ago, you needed a Heidelberg printed press, you had to be a skilled printer, know how to do color separations, negatives, type-setting … those presses were 90 feet long and 18 feet high …. Today, you open a laptop.”

Each year, more than 11.5 million Americans have their identities stolen. By the time you finish reading this article, 150 of your friends, neighbors and fellow citizens will have had their personal information violated and abused for some sort of monetary gain—one identity stolen every two seconds.

By the Thousands, Millions and Billions

Imagine how many cars, phones, watches, wallets, computers and other valuable possessions are stolen in America every day. Now think about this: Identity theft now costs America $24.7 billion per year—more than all other property crimes combined!

Some cases of identity theft simply involve someone stealing the credit card out of your wallet. Often, though, the theft is much more insidious—and far-reaching. In November and December last year, Target’s credit card payment system was hacked, and 40 million card numbers and 70 million other pieces of customer data were stolen. Experts say it may be years before the thieves finish vending their treasure trove of personal information to other would-be thieves.

In February, the University of Maryland announced the records of more than 300,000 faculty members and students dating back to 1998 were compromised in a data breach. The stolen records included names, social security numbers, dates of birth and the university ID numbers of staff members.

Once you give out information, anything can happen to it. In this case, information given out nearly 20 years ago may now be used to ruin people’s lives. These people better start looking in the mirror, because they may soon become financially unrecognizable.

The possibilities for identity thieves are almost limitless, because once they have your information—they are you!

In one notorious case, a criminal spent over $100,000 using someone else’s credit cards. He also qualified for and received a federal loan, and purchased multiple motorcycles, handguns and even houses in his victim’s name. Then he taunted his victim before filing for bankruptcy in the victim’s name.

That’s the power people can obtain over you if they get your information.

“What these criminals steal in a second also takes the victims years to recover,” says U.S. Attorney David J. Hickton. He was speaking after an employee at a credit union accidently discovered a “confederation of thieves” who were scamming the irs by stealing people’s identities and then their tax returns “on a scale that’s unprecedented.”

According to the irs, tax-related identity theft investigations are up 66 percent since 2012. The agency says it stopped $50 billion worth of false returns since just 2012. Still, the Treasury’s inspector general for tax administration estimates that the irs missed over 1 million fraudulent returns worth $3.6 billion in 2011.

But perhaps the most startling aspect of identity theft is this: In most cases, it isn’t the Fred AlphonzoMuhomaZipskis of this world—it is friends and family.

According to the Federal Trade Commission, more than half of identity theft victims reported that the culprits were people they know: co-workers, friends, employees, neighbors and even parents and children.

How to Protect Yourself?

Our world is plagued by fraud, theft and deceit. And if you believe your Bible, you know it will get worse before it gets better. As the Apostle Paul warned, “But evil men and seducers shall wax worse and worse, deceiving, and being deceived” (2 Timothy 3:13). He prophesied exactly the sort of conditions that prevail in these “last days”: “This know also, that in the last days perilous times shall come. For men shall be lovers of their own selves, covetous, boasters, proud, blasphemers, disobedient to parents, unthankful, unholy, Without natural affection, trucebreakers, false accusers, incontinent, fierce, despisers of those that are good, Traitors, heady, highminded, lovers of pleasures more than lovers of God” (verses 1-4).

In such a climate, you need protection. But as fbi assistant special agent Patrick Fallon Jr. says, “We’re kidding ourselves if we think there’s a foolproof method of protecting ourselves.”

Yet the Bible reveals a way to be protected. It is time you considered how to conquer these troubles—by letting God fight your battles for you!

God promises to bless and protect those who obey Him. You can come under that protection.

That does not mean you won’t experience any trials, or that you don’t need to take reasonable precautions to protect yourself. Neither does God promise us a problem-free life in this world. As Paul wrote to Timothy, “Yea, and all that will live godly in Christ Jesus shall suffer persecution” (verse 12). But He does promise to fight our battles for us—to deliver us from every trouble and affliction. And as long as you continue to obey God, you will overcome those trials—and emerge stronger for them.

Will you let Him do it and learn how happy and free from worry your life may become?