The answer eludes science—but it isn’t beyond our reach. 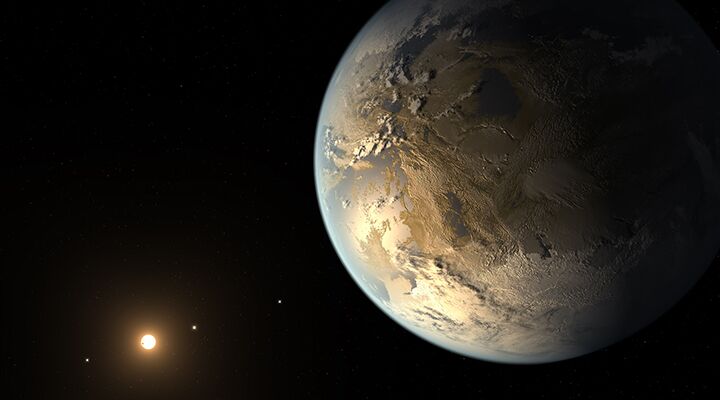 The answer eludes science—but it isn’t beyond our reach.

Scientists at nasa announced on April 17 the discovery of the first-ever Earth-size planet that seems capable of supporting human-like life outside of the solar system. Called Kepler-186f, the planet orbits its star in the “habitable zone”—which means its sun may keep it at the right temperature for liquid water to exist on its surface.

Until now, the only other planets that have been discovered in the “habitable zone” have been much larger than Earth, and therefore very different from our home planet. Many people are excited about Kepler-186f, as they believe it is more likely to have life on it than any other known planet beyond Earth.

“This is an historic discovery of the first truly Earth-size planet found in the habitable zone around its star,” University of California–Berkley’s Geoff Marcy told Space.com. “This is the best case for a habitable planet yet found. The results are absolutely rock solid. The planet itself may not be, but I’d bet my house on it. In any case, it’s a gem.”

“This is an historic discovery of the first truly Earth-size planet found in the habitable zone around its star.”

Kepler-186f was discovered by the Kepler space telescope, its namesake. One way the Kepler telescope looks for planets is by searching for short dips in the brightness of stars. When a planet moves between the Earth and the distant star the planet momentarily blocks part of its light. Kepler uses these dips to find planets and then work out how big they are, how fast they’re orbiting their sun, and how close they are to their sun.

Kepler-186f’s sun, Kepler-186, is a red dwarf. This means it is much cooler than our sun—about half its size and 25 times fainter. 186f is much closer to its sun than we are to ours, yet it receives less energy from its sun than Mars does in our solar system.

Apart from this, we know just about nothing else about Kepler-186f. Current theories suggest it is made of rock, but they offer no direct evidence. As Slate’s Bad Astronomy blogger Phil Plait, who was part of the Hubble Space Telescope team with nasa, put it, “It could be a barren rock, or a fecund water world, or made entirely of Styrofoam peanuts, or some weird thing we haven’t even imagined yet.”

No one insists that Kepler-186f contains life. After all, Mars is also in the “habitable zone,” but it is a barren wasteland. There’s more to it than just size and proximity to a sun.

But if we’ve spotted one planet that matches these two requirements, could there be more out there? The answer is almost certainly yes. Data from Kepler and other projects indicate that billions of such planets exist in our galaxy alone.

Life on Other Planets? Yes!

The Bible reveals there is not currently life on other planets. In Romans 8, the Apostle Paul described God’s creation as enduring a state of waste and decay (e.g. verse 20). As Herbert W. Armstrong wrote in his book The Incredible Human Potential, “This passage indicates precisely what all astronomers and scientific evidence indicates—the suns are as balls of fire, giving out light and heat; but the planets, except for this Earth, are in a state of death, decay and futility—but not forever ….”

“Mars is also in the “habitable zone,” but it is a barren wasteland. There’s more to it than just size and proximity to a sun.”

While that won’t stop nasa from looking for life elsewhere, it does raise another question for Bible-believing Christians: If the universe has a purpose and design, what’s the point of all these billions of planets that are just dead rocks, icy balls or dense, gassy clouds?

“Think about what that is saying,” Trumpet managing editor Joel Hilliker wrote in Our Awesome Universe Potential. “When you plant something, that means you are laying down seeds that you expect to grow into a crop. … Isaiah 51:16 tells us that God is going to plant the heavens—the abode of the stars—the universe! He is going to seed it with life, expecting that it will grow into a greater, more impressive harvest in time!”

When you realize that there are probably billions of planets in our galaxy alone, that makes for a dizzying and thrilling vision!