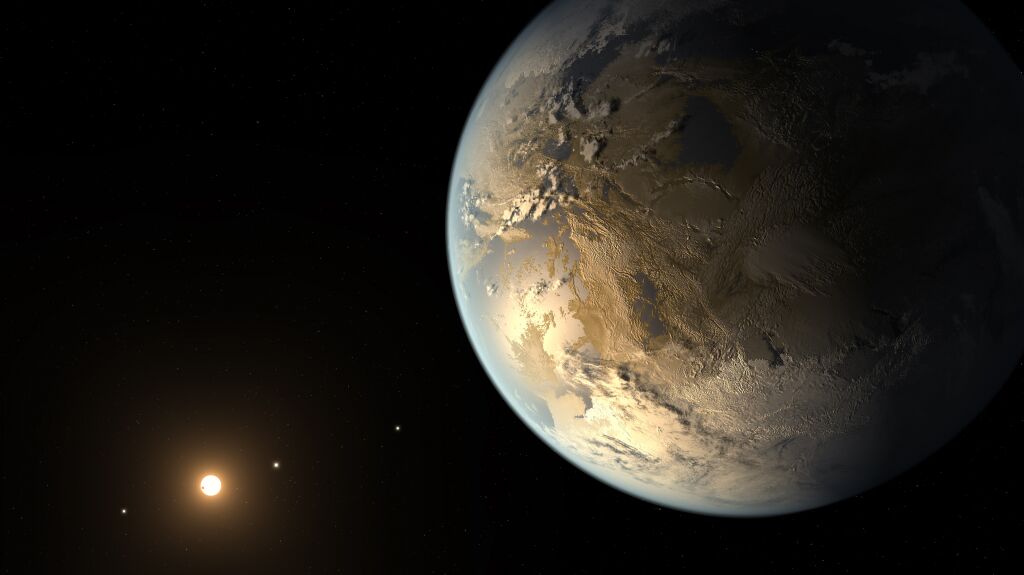 Not yet, but in the future there may be.

Scientists at nasa announced on April 17 the discovery of the first-ever Earth-sized planet that seems capable of supporting human-like life outside of the solar system. Called Kepler-186f, the planet orbits its star in the “habitable zone”—its sun may keep it at the right temperature for liquid water to exist on its surface.

Until now, the only other planets that have been discovered in the “habitable zone” have been much larger than Earth, and therefore very different from our home planet. Kepler-186f has gotten many people excited as they believe it is more likely to have life on it than any other planet discovered so far, apart from Earth.

“This is an historic discovery of the first truly Earth-size planet found in the habitable zone around its star,” University of California–Berkley’s Geoff Marcy told Space.com. “This is the best case for a habitable planet yet found. The results are absolutely rock-solid. The planet itself may not be, but I’d bet my house on it. In any case, it’s a gem.”

Kepler-186f was discovered by the Kepler space telescope (hence its name). One of the ways Kepler looks for planets is by searching for short dips in the brightness of stars. When a planet moves between the Earth and the distance star, the star becomes momentarily dimmer as the planet blocks out part of its light. Kepler uses these dips to find planets and then work out how big they are, how fast they’re orbiting their sun, and how close they are to their sun.

Kepler-186f’s sun, called Kepler-186 (without the “f”) is a red dwarf. This means it is much cooler and fainter than our sun—about half its size and 25 times fainter. 186f is therefore much closer to its sun than we are to ours. Even so, it receives less energy from its sun than Mars does in our solar system.

Apart from this, we know just about nothing else about Kepler-186f. Current theories suggest it’s made of rock, but there’s no direct evidence of it. As Slate’s Bad Astronomy blogger Phil Plait put it: “It could be a barren rock, or a fecund water world, or made entirely of Styrofoam peanuts, or some weird thing we haven’t even imagined yet.”

So no one is claiming that it certainly contains life. After all, Mars is also in the “habitable zone” but it is a barren wasteland. More things must be taken into account than just a planet’s size and distance from its sun.

But if we’ve discovered one planet that resembles Earth and resides about the right distance from its sun, could there be more? The answer is almost certainly yes. Data from Kepler and other projects indicate that billions of such planets exist in our galaxy alone.

The Bible clearly reveals there is not currently life on other planets. While that won’t stop nasa from looking, it does raise another question for Bible-believing Christians: If the universe has a purpose and design, what’s the point of all these billions of planets that are just dead rocks, icy balls or dense, gassy clouds? It’s not simply to look pretty—we can’t even see them from the Earth.

“Think about what that is saying,” said Trumpet executive editor Stephen Flurry said in a Key of David special. “When you plant something, that means you are laying down seeds that you expect to grow into a crop. Isaiah 51:16 tells us that God is going to plant the heavens—the abode of the stars—the universe! He is going to seed it with life, expecting that it will grow into a greater, more impressive harvest in time!”

Those planets are empty for now. But there will come a time when Kepler-186f will probably be renovated, shifted to exactly the right spot in orbit around its star, given the right atmosphere, and planted with life. And not just Kepler-186f—many, if not all, of the other planets could be planted with life too. It’s a dizzying vision when you think of the billions of planets that probably exist in our galaxy alone.

For more on the inspiring future of these planets, read our article “Planets, Planets Everywhere”.