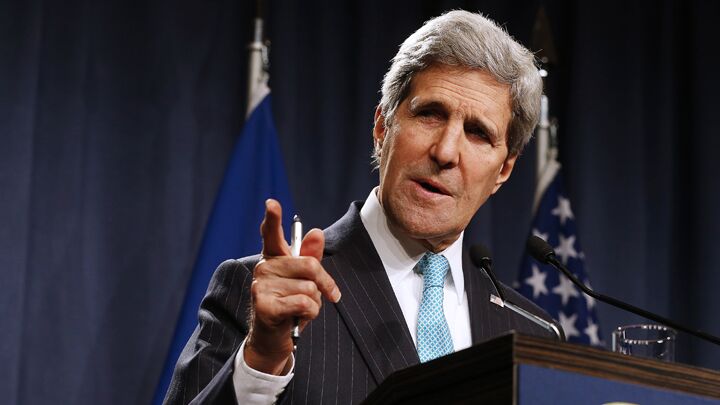 “This is an act of aggression. … It’s really 19th-century behavior in the 21st century. … You just don’t invade another country ….”

So said John Kerry, the United States secretary of state, in response to Russia’s invasion of Ukraine in March. That remark is valuable, because it provides profound insight into the worldview of America’s leaders and the disastrous mentality at the heart of America’s foreign policy.

The Obama administration apparently believes that because we live in the 21st century, because our leaders have Ph.D.s and were educated at Oxford and Yale, because the world is highly globalized and our leaders engage in erudite diplomacy, because human civilization is more sophisticated and advanced, that we have evolved beyond the era of invasions and wars. This is the 21st century, they seem to reason, and we’re now too smart and too progressive to invade nations and start wars.

It has blinded us to the fact that our human nature remains the same!

Behind the tailored suits, the smartphones, the culture, the sophistication, the private jets and the eloquent diplomacy, exist hearts that are naturally selfish, hearts that are inherently vain, hearts that crave power and preeminence, hearts that are fatally deceptive and wicked. Embedded within Vladimir Putin, as in all men, is an essential desire for self-preservation and self-advancement, and a proclivity to put self-interest and the interests of one’s own (family, state, country) above the interests of others.

This truth is summed up in Jeremiah 17, particularly verse 9, which ought to be carved in granite above the entrance to the U.S. State Department: “The heart is deceitful above all things, and desperatelywicked: who can knowit?”

This is worth thinking about. Your heart, and mine, and Barack Obama’s, and Vladimir Putin’s, and Xi Jinping’s, and even the pope’s, is “deceitful” and “desperately wicked.” The Hebrew word translated deceitful means sly, insidious or slippery. Wicked means sick, frail, woeful or incurable. Our hearts are not just sick or woeful, they are desperately sick and woeful, to the point of being incurable. This truth is not easy to sincerely accept. But consider the impact it would have if it informed and shaped America’s foreign policy.

If Jeremiah 17:9 were valued, foreign-policy strategies and decisions would take into account the tendency in other governments to lie, cheat and deceive. America’s leaders would be cautious about investing trust in the promises and platitudes of others. Aware of the selfish human nature within their counterparts in other states—and knowing that other states are advancing their own creed and pursuing their own ambitions—Washington would exercise a foreign policy of cautious realism. This may sound cynical and pessimistic, but such an outlook would inform a more resilient, stable and effective foreign policy, one less likely to be caught off guard by lies and exploited by deception.

Informed by Jeremiah 17:9, the wise statesman would be wary of obfuscation and lying, and would invest his faith and hope in action, not promises or rhetoric. Policies of appeasement and compromise would be practiced slowly, with caution. And while the foreign policy informed by Jeremiah 17:9 would not willingly or actively incite conflict, it would understand that conflict is inevitable and would always be ready for it.

Joseph Conrad wrote, “I have never been able to find in any man’s book or any man’s talk anything convincing enough to stand up for a moment against my deep-seated sense of fatality governing this man-inhabited world. … The only remedy for … us is the change of hearts.” Many today would call Conrad a cynic. But he was simply looking into human history and making a realistic observation.

The human heart does not know the way to long-term peace, happiness and stability. We simply don’t know how to forge a world without conflict, unhappiness and destruction.

Conrad was absolutely right: The only remedy for mankind is a “change of hearts.” Believe it or not, this change of heart Conrad yearned for is almost here.

Few people have understood the depths of Jeremiah 17:9 like the late Herbert W. Armstrong. Employing the authority of Scripture, Mr. Armstrong explained the origins of this evil, selfish state of the human heart and mind. “[T]he selfishness, hostility, deceitfulness, wickedness, rebellion, etc. that we call ‘human nature’ is actually Satan’s nature,” he wrote in The Incredible Human Potential.

Although the human heart is terribly sick—incurable by human beings—there is a cure. The cure lies in the Spirit of God, the divine power by which mankind was created, and by which converted Christians produce fruits of peace, joy, gentleness, longsuffering and giving. In His time, God will make that Spirit available to all of mankind. When the Spirit of God enters the minds of men, their human hearts will be healed of their infirmities.

Until then, it would be wise for Barack Obama and the stewards of America’s foreign policy to study Jeremiah 17:9.