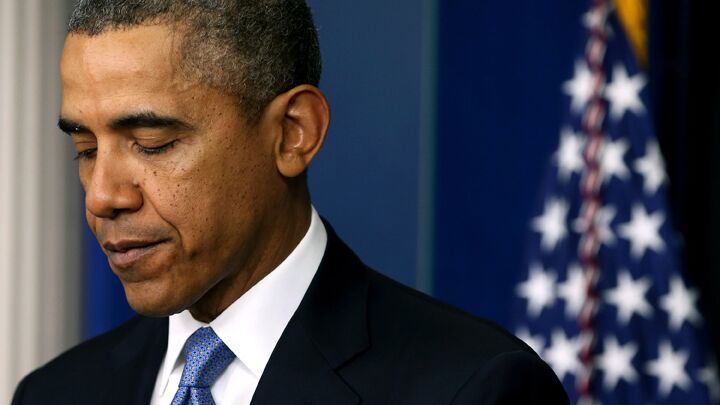 America’s response to Russia is weak for a reason.

“Today, I’m announcing a series of measures that will continue to increase the cost on Russia and on those responsible for what is happening in Ukraine,” President Barack Obama said in his much anticipated March 17 speech.

The world held its breath. Russian oligarchs trembled in fear. Russian President Vladimir Putin wondered if he had gone too far.

First, as authorized by the executive order I signed two weeks ago, we are imposing sanctions on specific individuals responsible for undermining the sovereignty, territorial integrity and government of Ukraine. …Second, I have signed a new executive order that expands the scope of our sanctions. As an initial step, I’m authorizing sanctions on Russian officials—entities operating in the arms sector in Russia and individuals who provide material support to senior officials of the Russian government. And if Russia continues to interfere in Ukraine, we stand ready to impose further sanctions.Third, we’re continuing our close consultations with our European partners ….Fourth, we’ll continue to make clear to Russia that further provocations will achieve nothing except to further isolate Russia and diminish its place in the world. …

Cheers and vodka corks erupted in the Kremlin.

Consider. Points three and four (you can read them in their entirety here) are absolute drivel without substance—filler to make the speech last longer than two minutes. Enough said.

Points one and two seem stronger but are also incredibly weak. Beyond the speech, this is what we know: Economic sanctions have been levied on 11 people. Four of them are Ukrainians. And according to abc News, some of them don’t even have U.S. assets.

Perhaps more sanctions are coming, but so far, that’s it. Russia has been working a coup in Crimea since before the end of the Sochi Olympics, and so far all we have done is partially freeze some assets of Putin’s aides. Is that all we could come up with? Last time I checked there were around 140 million Russians, and hundreds of Russian businesses operating in the United States.

Then there is the possibility of denying Russia access to the dollar payment swift system in Belgium that processes payments in all currencies, not just dollars. Foreign banks that wish to do business in America could also be asked to freeze Russian assets.

That is an immediate hit to Putin’s pocketbook.

If we were still friends with Saudi Arabia, the sheiks could probably have been convinced to join too.

Even so, there are plenty of ways to increase the pain on Russia—if America was really interested in doing something about Crimea.

Instead we put sanctions on 11 people—and Putin isn’t even one of them.

In contrast, how many Ukraine supporters in Crimea will lose everything? What about the Tatars who make up 15 percent of the population and refused to vote in the referendum because they remember what happened to them the last time Ukraine was part of Russia?

It would be tempting to think that President Obama was being tougher behind the scenes. And was just talking soft to de-escalate things.

Want to know why?

On March 4, Russian presidential adviser Sergei Glazyev made offhanded comments suggesting that if the U.S. took real action against Moscow, it would hurt America’s economy as much as Russia’s.

And he is probably right. With America’s debt-bloated economy barely keeping its head above water, a trade war including Russia and Europe could drag America and the global economy back into recession.

But it was Glazyev’s second remark that probably captured American policy makers’ attention the most. He said that if sanctions went too far, Russia “should dump U.S. government bonds”—all $200 billion worth.

$200 billion is a significant amount. No doubt it would hurt, but America would probably survive.

America owes so much money to so many people that if Russia were to signal it was dumping its U.S. debt holdings, other smaller investors might decide that they want out first. The proverbial run on the bank becomes reality.

But then America still needs to consider how much money it owes China. As Trumpet editor in chief Gerald Flurry highlighted in “Russia and China Unite (Crimea),” China has thrown its support behind Russia. And economically, America does have to consider very carefully what China might do.

The bbc recently released an interview with former U.S. Treasury Secretary Hank Paulson. It describes the great extent he went to in order to convince China not to dump its $1.7 trillion in Fannie Mae and Freddie Mac bonds during the economic meltdown in 2009.

But here is where it becomes, as the bbc’s Robert Peston says, a “geopolitical thriller.” Secretary Paulson recounts: “Here I’m not going to name the senior person, but I was meeting with someone …. This person told me that the Chinese had received a message from the Russians which was, ‘Hey let’s join together and sell Fannie and Freddie securities on the market.’ The Chinese weren’t going to do that but again, it just, it just drove home to me how vulnerable I felt until we had put Fannie and Freddie into conservatorship [the rescue plan for them, that was eventually put in place].”

Here is the take-home message. China may have refrained from attacking the U.S. financial system at that time, but Russia and China have held discussions about it! This scenario is no longer in the realm of speculation.

Russia and China have actually discussed a joint pact to not only maximize the turmoil on Wall Street, but to directly attack America’s financial system. This is the reality facing America.

America’s reliance on foreign nations to lend us money is now so great that it is crippling our foreign policy and our ability to assert our interests in the world.

The Bible, which is perhaps the oldest book on geopolitics, warns about the dangers of debt—especially debt owed to foreigners. Deuteronomy 28:43-45:

The stranger that is within thee shall get up above thee very high; and thou shalt come down very low. He shall lend to thee, and thou shalt not lend to him: he shall be the head, and thou shalt be the tail. Moreover all these curses shall come upon thee, and shall pursue thee, and overtake thee, till thou be destroyed; because thou hearkenedst not unto the voice of the Lord thy God, to keep his commandments and his statutes which he commanded thee.

In its March report, the Bank for International Settlements noted that Americans owe 58 percent of total world debt—a whopping $58 trillion worth. Meanwhile, America’s gdp only makes up less than a quarter of the world’s total economy.

All that debt has allowed America to live like a king, but now it is making it a slave to the world. More importantly, because America has turned from the God that made it great, it is no longer receiving the blessings that naturally result from keeping God’s commandments. Blessings like lasting prosperity and geopolitical strength. We are not free from fear because our precarious debt load means our enemies can threaten to destroy the dollar and cripple our economy.

America’s superpower days are ending. Allies be aware. Ukraine, you are on your own.