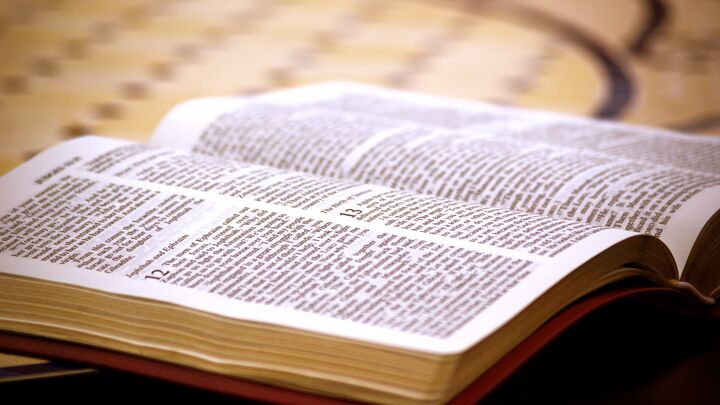 The Philadelphia Trumpet, in conjunction with the Herbert W. Armstrong College Bible Correspondence Course, presents this brief excursion into the fascinating study of the Bible. Simply turn to and read in your Bible each verse given in answer to the questions. You will be amazed at the new understanding gained from this short study!
From The April 2014 Philadelphia Trumpet
View Issue FREE Subscription

Many people call themselves Christian! Nearly one third of people on Earth say they are Christian—about 2.18 billion out of about 7 billion. And the number is growing.

But what exactly does that mean? Do all those people conform to the criteria described in the book that forms the foundation of Christian beliefs, the Bible?

The book of Acts is the history of the early New Testament Church of God. It covers the major events in briefest summary form. This book attests to the fact that to live a Christian life is to live a certain way—to do certain things—to conform to certain standards.

One of the early Christians was a man named Apollos. He was an excellent speaker and well versed in the Old Testament Scriptures. He preached boldly. However, Apollos needed more understanding. A dedicated couple in the Church of God gave him further instruction. Notice the account in Acts 18:26: “… whom when Aquila and Priscilla had heard, they took him unto them, and expounded unto him the way of God more perfectly.”

Real Christianity, as described in the Bible, is a “way” of life—God’s way! But what exactly is that “way” that a Christian is supposed to live?

How Does a Christian Live?

The word Christian, derived from Christ, in a literal sense refers to one who follows Jesus Christ. Jesus described the very basis of real Christianity in what is commonly called the Sermon on the Mount (Matthew 5-7). This “sermon” actually started out as a private lesson for His disciples (students or learners). Jesus pointed out those characteristics that would clearly identify His true followers.

Before we focus on several of these Christian characteristics, you should first read all of Matthew 5, 6 and 7. This passage describes several aspects of the Christian way of life.

1. What did Jesus say about the “poor in spirit”? Matthew 5:3. Did He mean they would be lacking the Spirit of God? Romans 8:9.

If someone doesn’t possess the Holy Spirit, “he is none of his”—he is not a Christian! A real Christian is one who is led by the indwelling Spirit of God (verse 14), which provides the power to live God’s way. By “poor in spirit,” Jesus was not suggesting that they would lack God’s Spirit. Rather, He went on to show that those who are truly humble will be blessed because they will be in God’s Kingdom.

There is a difference between being meek and being weak. Jesus was meek, but not weak! He endured abuse and injury with patience and without resentment. A meek person will not try to justify himself when he is wrong. Neither does he feel superior to others. He will not try to get even with others, nor try to get revenge.

To “hunger and thirst” for righteousness is to be deeply motivated to obey God—to keep His laws, which He gave to us in loving concern for our own good.

Those who truly hunger and thirst for righteousness will be studying God’s Word for true understanding. They will be willing to change when they see they’ve been wrong, admitting their wrong beliefs, mistakes and sins. “Study to shew thyself approved unto God” (2 Timothy 2:15), wrote Paul. “Prove all things,” he also said (1 Thessalonians 5:21).

4. Who did Paul say are justified before God? Romans 2:13. Paul made it plain that the unmerited pardon of our sins is by the grace of God through faith in Christ’s sacrifice. Nevertheless, a Christian is still required to keep God’s law. Read Romans 3:31 and all of chapter 6.

5. Who did Jesus say will enter the Kingdom of God? Matthew 7:21. What did the Apostle Paul plainly say was most important for a Christian to be doing? 1 Corinthians 7:19.

Notice that in order to enter God’s Kingdom, there is doing required—not just the confession of Christ as our Savior. God is very concerned about our spiritual “works” after we become Christians. He makes it plain that we cannot enter the Kingdom of God just by thinking Christ has done it all for us.

6. Unless one has the love of God, can he really be a Christian? Read 1 Corinthians 13:1-8, 13 (the word charity in the King James Version means godly love). What are we if we lack the love of God? Verse 2.

7. Will God’s love, which He imparts through His Spirit, lead one to keep the Ten Commandments—all 10 of them? Romans 13:8-10. In what way did God inspire John to confirm Paul’s statement—what is the Bible definition of God’s love? 1 John 5:2-3. How is God’s love perfected in a Christian? 1 John 2:5.

A Christian ‘Walks’ With God

3. What other great patriarch walked with God and found grace in God’s sight? Genesis 6:8-9. Was Noah clearly a faithful and righteous man who pleased God? Hebrews 11:7.

True friends walk together and talk together freely, without fear or embarrassment. They think much alike and are in agreement, or else they are not real friends.

9. Did God promise to walk with His people if they would walk with Him? Leviticus 26:3, 12. Would He greatly bless them if they walked with Him? Verses 4-11.

10. But if the people of Israel chose to walk contrary to God, what did God say would happen to them? Leviticus 26:14-39.

To “walk with God” clearly means to keep His commandments and laws, and to do what is pleasing in His sight. It is the only way to be a real Christian!

Relations With the World

A real Christian will no longer follow all the customs and practices of the society around him. Where he formerly “went along with the crowd,” thoughtlessly participating in various social activities and business practices, he will now begin to question his lifestyle. He will begin asking: “What is God’s will? How does God say I should live?” He will begin saying, with Christ, “Nevertheless not my will, but thine, be done.” And he will begin to diligently search the Word of God to learn the will of God, and follow it.

Of course, God’s people must live in this world (John 17:15-16). And while striving to fully obey God, not being conformed to this world’s ways (Romans 12:1-2), they should strive to “live peaceably with all men” (verse 18). If a Christian has to disagree because of a biblical teaching, he does so without being disagreeable or self-righteous about it.

2. What further responsibility do Christians have toward the world? Matthew 5:14-16.

While not “of the world” in the sense that Christ meant in John 17:16, those men and women of God who have the Holy Spirit and knowledge of God’s truth and abundant way of life have a responsibility to be bright “lights” in the world. They should exhibit the “fruit,” or characteristics, of God’s Holy Spirit in their daily lives. They should strive to be friendly, helpful and kind toward their neighbors and those they come in contact with every day. People not yet called of God will be encouraged as they see a little of the mind and character of God in action through the living example set by individual Christians.

3. What steps has a Christian already taken to be recognized by God as one of His children? Acts 2:38. What has God bestowed upon him as a free and unearned gift because of his obedience? Same verse and Acts 5:32. (“Holy Ghost” is an archaic rendering in the King James Version. It should be translated “Holy Spirit.”)

A Christian has been conquered by God. His carnal, antagonistic attitude toward God (Romans 8:7-8) is broken. He has come to realize he has sinned against God, having broken His holy, righteous law (1 John 3:4). Therefore he cried out to God and asked His forgiveness for those sins through the sacrifice of Christ, and for a lifting of the death penalty, which every sin incurs (Romans 6:23). Then he obeyed the command to be baptized, indicating to God his deep sincerity.

As a result of his repentance, baptism and the laying on of hands, he was given the Spirit of the Father, becoming a Spirit-begotten child of God. It was then that he became a real Christian!

5. What does God call the person who claims to “know” Christ, but refuses to walk in His ways—refuses to keep His commandments? 1 John 2:4. What will the one who says he is a Christian actually be doing? Verses 3, 5-6.

A Christian has sincerely repented of his sins and is striving, with the help of God’s Holy Spirit, to live by his Savior’s teachings. He is seeking to do God’s will in every aspect of his life as it is revealed in the Bible. And he is becoming a recipient of the happiness and blessings that come from being obedient to God!