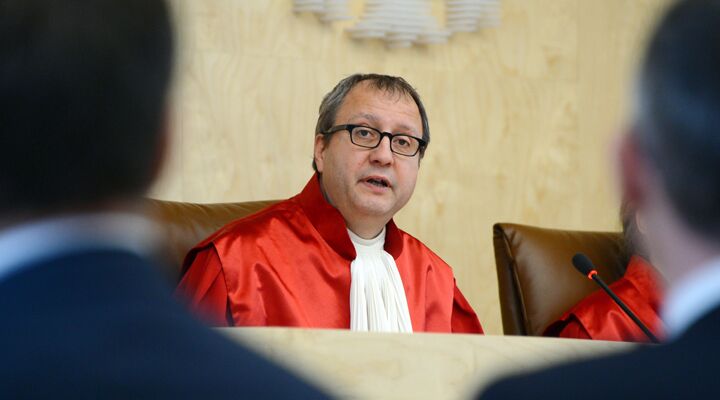 The German Constitutional Court has made a huge European financial crisis inevitable.

For months we’ve been waiting for the German Constitutional Court’s ruling on the European Central Bank as the next game-changer for Europe. And we weren’t disappointed. Its ruling is of huge importance—to the entire global economy.

By the summer of 2012, things were looking desperate for the euro. Greece, Ireland and then Portugal had been forced to ask the EU for a bailout. Then it was the big boys’ turn: Spain and Italy were next. It was so expensive for them to borrow money that neither could keep going for long. But a bailout of these nations would be hugely expensive. There seemed no way for the euro to survive.

Into the breach stepped the new head of the European Central Bank (ecb), Mario Draghi, wielding what has somehow become known as a “big bazooka.” If a government had trouble borrowing the money it needed to keep going, he promised to print an unlimited amount of money and lend it (in a convoluted way) to the troubled government, in a process called Outright Monetary Transactions (omt).

Draghi hoped that this “bazooka” would never need to be used. If investors believed that the ecb would never allow a government to go bankrupt, then they would lend money more easily.

It worked. The euro crisis peaked in the autumn of 2012. It has still been simmering away, never actually solved, but Draghi’s move averted the immediate danger. Until last Friday.

On that date the German Constitutional Court, based in Karlsruhe, issued a ruling that will make it very hard for Draghi to use his bazooka.

Before we get to the actual ruling, we must understand what is at stake.

At the heart of the court’s ruling are two key questions about the future of Europe: who pays and who controls.

Compare the situation in Europe to the one in the United States. As America recovers from its financial crisis, neither of these questions is a big deal. Americans share a loyalty to the same nation. They pay their taxes into the same pot. The Kentuckians are not up in arms because they don’t think the New Hampshirites are paying their fair share and the Michiganders are not accusing the Wisconsinites of lording it over them. The blame game is still played (i.e. it’s all the fault of the 1 percenters) but it’s not split along geographic borders.

In Europe, these questions are standing in the way of a solution to the euro crisis. The Germans don’t want to pay, as they say it’s the Greeks’ fault. The Greeks protest their innocence, and insist that Germany actually owes them money from World War ii. And it goes round and round.

Draghi’s bazooka—if ever used—would get around this problem by making everyone, including Germany, pay, but by doing it quietly. Financial laws have been broken in Europe, just as they have in America, and no amount of economic trickery can eliminate the penalty for breaking those laws. Draghi’s maneuvers can only change who pays, and how much.

Many at the very top of Germany’s government were happy with Draghi’s move. After all, Germany will incur some substantial losses from its euro membership whatever happens—either through more bailouts or collapsing exports to southern Europe. But Draghi’s way of doing things was more subtle, and if it all went wrong, the European Central Bank, not the government, would get the blame.

But last Friday’s ruling put a stop to all that. The Constitutional Court said it considers omt “incompatible with primary law.”

The way the court made the ruling, however, has thrown up a lot of confusion. After saying it was sure omt was illegal, it referred the case to the European Court of Justice (ecj).

Many saw that as cause for rejoicing. The ecj is run by judges who don’t worry about tiresome details like what the law actually says. To them, it’s all about what they, in their infinite wisdom, think is best. Hence their decision last year that even though the Lisbon Treaty states that Britain is exempt from the EU’s Charter of Fundamental Rights, it actually isn’t.

The ecj should have no trouble in ignoring EU law and ruling Draghi’s actions legal. But Germany’s Constitutional Court does not consider the ecj a higher court. It’s essentially said, We think omt is illegal, but the ecj is the court directly responsible for EU law, so we’ll consider its opinion.

If the ecj says that everything is fine, that will trigger a showdown with Germany’s top court, and the ecj will almost certainly be overruled. It might be much safer for ecj to rubber stamp the court’s decision.

Even in the months that it takes the ecj to consider the matter, Draghi’s bazooka seems disabled. “The German court has parked a tank on the lawn of the ecb,” the Telegraph’s Ambrose Evans-Pritchard quoted an anonymous “expert closely involved with the case.”

“The bank’s nuclear weapon is no longer operational, but you could say they bought 18 months of eurozone calm, so the omt served its purpose,” continued the expert.

“If you look back to all the previous German Constitutional Court cases on the euro, the answer was always a variant of ‘Yes, but.’ This ruling was the legal equivalent of ‘No, no, no,’” writes Financial Times columnist Wolfgang Münchau—though noting that the referral to the ecj made it a little more complicated than a straightforward “No.”

Münchau also writes that it seems impossible for the omt to be used. Even if Germany doesn’t take part in it—which in itself would be a big deal—the government would still have to give its approval. If that happened, it would be challenged at the Constitutional Court, at which point “the court would then either eat its words or trigger a crisis,” he concludes. “I cannot see how it could be triggered in practice given such explicit condemnation by Germany’s highest court.”

Spiegel Online notes that the ramifications could spread even further: “In truth, it is nothing less than a final reckoning with the crisis-management strategy pursued by the ecb.”

“The German justices insist that the German constitution sets limits on the ecb’s strategy in the crisis,” Spiegel continues. “And that could have consequences that go far beyond the jurisdiction of the court in Karlsruhe. In a worst-case scenario, the Constitutional Court could forbid Berlin from contributing to efforts to save the euro or even force Germany to leave the currency zone entirely.”

The court ruled that Draghi’s bazooka is, in its opinion, as “ultra vires act.” “Measures taken by European institutions that are not covered by treaties occur ‘ultra vires,’ meaning they violate the sovereignty of EU member states,” explains Spiegel. “By extension, that means that if the German government and parliament do not protect the country from the multibillion euro policies of the ecb, then the Constitutional Court must step in—even by way of a verdict which could force Berlin to withdraw from the eurozone.”

Spiegel speculates that the court’s decision to send the case to ecj could simply be a way of advertising its preeminence:

The Karlsruhe justices feel stronger than ever. For the first time, they dared to do what they had been threatening to do for years: They branded a European decision as ultra vires and thus found it to be inconsistent with the German constitution. Sending this finding to a European court has far-reaching implications for the court’s reputation and authority: “The ruling will now be translated into the 23 other official EU languages and sent to all EU member states,” one Constitutional Court insider noted with gratification.

The court’s ruling indicates that it would strike down any similar method the ecb may try and use to mitigate the immediate pain of a financial crisis—such as quantitative easing.

The ruling means that there will be no quiet, subtle pilfering of German taxpayers’ money to help indebted European countries. If southern Europeans want German cash, they’re going to have to ask for it up front.

That’s not as easy as quietly printing the cash and lending it to indebted governments. The Germans won’t hand it over without a stiff price: German control over how that money is spent, which will translate into German control over the whole of the eurozone. Even then, most in Germany would be unhappy.

The final result will have to be something that looks a lot more like the United States, with a more central government, so the transfer of money is less obvious and less contentious. But because Germany is putting up the lion’s share of the money, it will retain overall control.

Even then, the union will be much more fractious than America. European nations have centuries of separate history; they cannot become American-like states, certainly not overnight. But the only way to make a common currency work is to create that kind of union.

The road to the United States of Europe will not be smooth. The German court’s ruling will probably be forgotten, until the next crisis. At that point, investors will not have the confidence they once had in Draghi’s bazooka—and its confidence-boosting was always its greatest strength. The ecb’s attempts to create some kind of fudge that prevents an economic emergency has been thwarted by the German Constitutional Court.

A full-blown crisis is now inevitable, and that crisis will force Europe to unite like never before.