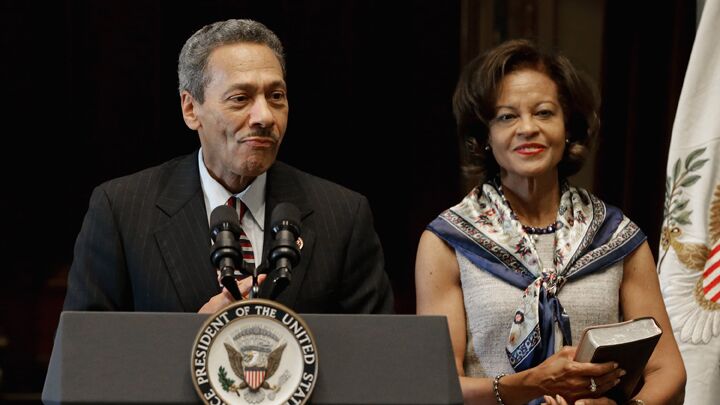 Fannie and Freddie have a new boss: Mel Watt, the man who helped bankrupt them.

One of the most controversial Obama appointees yet was sworn in as director of the Federal Housing Financial Agency on January 6.

Democrat Representative Mel Watt now oversees Fannie Mae and Freddie Mac, the two giant government-owned mortgage companies. He is also perhaps the one man more responsible than Federal Reserve Chairmen Alan Greenspan and Ben Bernanke for the housing bubble that popped in 2007—and that is saying a lot.

Watt, who was chairman of the Congressional Black Caucus, is perhaps best known for pushing banks to give risky loans to blacks and other minorities that could not afford them. In the lead up to the housing bubble, he drafted legislation that would have pushed banks to even give mortgages to people on welfare, as long as they could come up with $1,000. To placate the banks, which did not want to lend money to people they knew could not pay it back, his plan called on the government to cover any losses incurred by the banks by guaranteeing the mortgages.

Watt’s confirmation to run Fannie and Freddie came after Senate Democrats changed the rules to overcome filibusters. The final vote was 57 to 41, with two Republicans joining the Democrats.

Astoundingly, much of the Republican criticism of Watt only focused on his qualifications. Republicans said that despite being a lawyer, Watt did not have the business experience to oversee the two giant mortgage companies.

There was almost no discussion about his role in the housing bubble.

In October 2002, Watt announced public-private partnership called “Pathways to Homeownership.” This plan was designed to coerce banks to give mortgages to people even if they couldn’t scrape together a down payment.

Watt did everything in his power to push policies to get people to buy homes—regardless of whether or not they could afford them. He worked to expand government mortgage insurance programs, government handouts and tax credits. As Watt’s Black Caucus described one initiative: “[L]oan products will be aimed at borrowers experiencing challenges in accumulating wealth and who have not developed traditional credit histories, or who have impaired credit.” One million African Americans will benefit by 2005, it bragged.

Even in 2007, when the housing market was imploding from all these subprime loans, Watt pushed a bill to force Fannie and Freddie to make more loans to non-creditworthy minorities in inner cities.

Watt also fought tooth and nail against any effort to reduce subprime lending. He and Rep. Barney Frank, led the effort to successfully block the 2003 Fannie and Freddie reform effort.

While there’s plenty of blame to go around for America’s mortgage meltdown, one cause that few are talking about is the hazardous lending practices the federal government actually encouraged throughout the 1990s in order to placate activists who criticized mortgage lenders for discriminating against minorities. …But instead of concentrating on individual instances of creditworthy minorities being discriminated against, it enforced sweeping policies designed to arm-twist banks into making loans available to practically anyone—even those with horrible credit ratings. …Besides pumping trillions of dollars into low-income housing programs, the government aggressively went after banks it considered to be discriminatory.

Mr. Flurry then quoted the Economist as saying banks were so afraid of the Justice Department’s allegations of racism that they were putting themselves at huge financial risk by making loans to minority applicants with dodgy credit ratings.

Not surprisingly, the housing market enjoyed explosive growth under these conditions.

With practically everyone approved for a mortgage, the demand for homes skyrocketed. Real-estate prices shot sky high. And as long as home prices rose, everyone felt secure inside the bubble.

Lending institutions made money hand over fist by accumulating new loans and then reselling them to Fannie Mae and Freddie Mac. They, in turn, made huge profits by bundling their loans into securities and selling them on the bond market.

For banks, it was worth the foreclosure risk as long as the housing market surged—and they could dump their crummy loans on pension funds and unsuspecting institutional investors.

And for the giddy buyers, it made sense too. Even if they couldn’t make their payments, they could at least sell their homes for a profit—or perhaps take out a second mortgage on the home’s appreciation in value. Even those with good credit wanted a piece of the real-estate pie. In hopes of building equity in the overheated market, many hurriedly upgraded their living arrangement or purchased a second home before prices skyrocketed further. Those who stayed put could also get in on the action by seeking a line of credit or a second mortgage in order to remodel the house or buy a boat.

During the carnival-like joy ride, few politicians and economists sounded the alarm. We certainly did. But few listened.

Then look what happened. Continuing from Stephen Flurry’s article:

Now that the housing bubble has popped, commentators, economists, academics, activists and especially politicians have laid blame on just about anything and everyone—government deregulation, greed on Wall Street, “golden parachutes” for ceos to bail out of failing companies, President Bush’s bad economic policies, Democrats like Barney Frank who assured Americans a few years ago that Fannie Mae and Freddie Mac were not facing a financial crisis, Republicans who warned of a financial meltdown at that same time, but who failed to take any meaningful action at a time when they controlled Congress and the White House—and on and on it goes.To be sure, there’s plenty of blame to go around. But if you want to talk about root causes of the financial crisis, a conversational centerpiece has to be political correctness run amok. Despite the seemingly noble idea of removing even the most basic mortgage underwriting standards in order to dramatically increase the chances of minority homeownership—not to mention loans for single moms, new immigrants, etc.—it resulted in the biggest housing bubble in history.

And now, President Obama has appointed a man who is arguably one of the chief architects of the subprime housing bubble to oversee the government-owned lenders that currently issue over 60 percent of all new mortgages in America!

Talk about hiring an inmate to run the insane asylum.

What do you think he will do? He has already told us. Reflate the housing bubble by helping people buy houses they cannot afford.

Even before he was confirmed, he said that he will stop the planned increases in government-backed mortgage fees that were designed to wean the mortgage market off government subsidies. He also put his name to a letter calling on Fannie and Freddie to forgive the debts of underwater homeowners who speculated on McMansions at the height of the bubble.

Mel Watt’s record is public knowledge. So why has there been so little discussion about it? Why didn’t Republicans challenge him on that, rather than criticizing his lack of business experience?

Here’s one reason: Everybody is afraid to be called a racist. No one wants to be associated with anything that can be twisted or perceived to be against minorities. The race card is a powerful motivator in today’s political climate.

Also, as Stephen Flurry brought out in his article, Republicans too were complicit in the housing bubble and pushing banks to issue risky loans to those who could not afford it. No one likes to have their own skeletons brought into daylight.

But there is another reason also.

Big banks and real estate groups are some of the biggest donors to both political parties. As the Center for Responsive Politics points out, financial industry players (commercial banks, investment banks and insurance companies) are three of the top five contributors to Watt’s election coffers.

Mel Watt is just the man for Wall Street. He said he wants to reflate housing prices, and he is for lowering the lending standards again.

The big banks couldn’t be happier. Issuing subprime loans to those who can’t afford them makes good economic sense—as long as the government is there to subsidize it and bail them out when things go wrong.

With the ridiculous appointment of Mel Watt as the mortgage market regulator, President Obama has signaled that government-backed loans are here to stay. That means Housing Bubble 2.0 may be on the way.