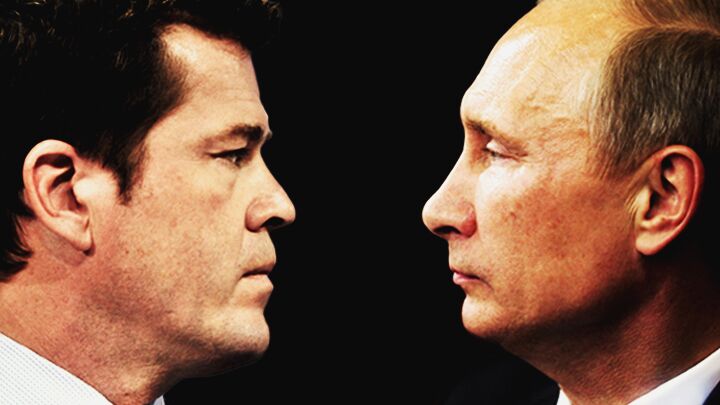 Though polite and diplomatic, Karl-Theodor zu Guttenberg’s candid, even forceful, message to Vladimir Putin this week was infused with a spirit of confrontation.

There it is, as expected and right on cue: A strongman from Europe, Germany to be precise, has responded with eloquence and force to the dramatic and belligerent antics of Vladimir Putin, Russia’s strongman and a king of the east. Although the well-crafted riposte, delivered in the form of an opinion article at Time (“Putin Is Basking in an ‘Astonishing Leadership Vacuum’”), was polite and prudent, it was also uncompromising, candid and forceful. There was also an undeniable spirit of confrontation.

Time will tell, but this article could mark the opening bell of a dramatic—and prophetically significant—battle between two heavyweight world leaders.

Regular Trumpet readers won’t be the slightest bit surprised to learn the author was Karl-Theodor zu Guttenberg. Germany’s former defense minister is an individual we have long eyed and repeatedly identified as a likely candidate to be the prophesied strongman of Europe.

(It’s not insignificant that Guttenberg teamed-up with Russian Garry Kasparov, a chess grandmaster and the former world chess champion, and an active critic and political opponent of Vladimir Putin. Sharing the byline with one of Putin’s most outspoken enemies was a symbolic gesture and gives the message added zing.)

Russia’s president has gotten the message, no doubt about it.

We’ll catch the highlights of Guttenberg’s article in a moment, but first, consider a few recent statements from Gerald Flurry, the Trumpet’s editor in chief. Mr. Flurry has watched Putin for years, and in recent weeks has delivered some powerful and important forecasts about Russia’s president, both on the Key of David television program and on this website. In particular, Mr. Flurry has warned specifically that Putin’s behavior—especially in Ukraine—would arrest Europe’s attention, compel Europe to integrate, and result in the prophesied emergence of a strongman on the Continent.

In early December, Mr. Flurry wrote that Putin’s behavior in Ukraine “rattled some European leaders to their core.” “America is sleeping through the Ukraine crisis. But Europe is deeply alarmed by what happened to this country that is right in its own neighborhood! The changes this crisis provokes in Germany and Europe will shake the nations! The Ukraine debacle has taken us a giant step closer to World War iii!” In the conclusion to that article, Mr. Flurry warned: “We need to watch Vladimir Putin closely. I believe he is almost certain to be the ‘prince of Rosh’ that God inspired Ezekiel to write about 2,500 years ago! We need to watch what is happening in Russia and how Europe responds to it. Daniel 11:44 talks about ‘tidings out of the east’ troubling Europe. Mr. Putin’s tactics in Ukraine, Georgia, the Middle East and elsewhere are already deeply troubling to Europe. If you study Moscow’s foreign policy under Putin’s leadership, it is plain that the ultimate goal is to eventually conquer the whole world. Europe is certainly aware of this goal and is closely watching its neighbor to the east.”

This forecast was consistent with what Mr. Flurry and the Trumpet have stated for years: That the belligerence of Vladimir Putin and Russia would act as a catalyst for the unification of Europe and the emergence of a strongman in Europe!

With these words in mind, consider some of the statements from Mr. Guttenberg.

Since Vladimir Putin’s official return to power in 2012, the Russian president seems to have set his mind on teaching the rest of the world a few simple lessons. First, that he shall not be underestimated on the international stage; second, that Moscow will keep reasserting control over what it considers to be its legitimate sphere of influence for Russia; and finally, that he shall do whatever he pleases at home. To convey his message, Putin has supported a murderous dictator, lectured the U.S. about multilateralism, blackmailed his neighbors into accepting Moscow’s ironfisted embrace, inflamed anti-American and anti-gay sentiments, and brutally cracked down on dissidents.

You have to admire Guttenberg’s candor and fearlessness. Unlike so many others, this man sees reality, accepts it, and isn’t afraid to talk about it openly and honestly. He understands human nature and the nature of geopolitics. Unlike America’s leaders, he also understands Russia and Vladimir Putin. His honesty has a refreshing appeal. “When it comes to the honorable title of Bully of the Year, the Russian president surely triumphed in 2013,” he wrote.

Guttenberg explains the central cause of Putin’s jingoism. “The primary reason for Putin’s self-aggrandizing behavior is the astonishing leadership vacuum in the world,” he says.

That is a direct criticism of America, the unambiguous world leader since 1989—and he is 100 percent right!

Guttenberg continued: “Washington’s recent preference to let other nations, including Russia, lead on international affairs has eroded the U.S.’s authority.” Russia’s return as an imperialist power is a direct and immediate function of America’s immoral and toothless foreign policy.

Guttenberg’s most profound—and telling—remarks concern Germany and Europe, and how the Continent needs to (and is) responding to Putin’s behavior. “A somewhat overlooked aspect of the contest over Ukraine is the role Berlin has played in it. Germany is the country that has often emphasized the importance of building bridges to Russia, and has come up with policies like ‘change through rapprochement.’ But by now, Putin’s zero-sum game mentality and hard power push have provoked even the otherwise not-so-confrontational German chancellor to take action” (emphasis added throughout). He then noted a few practical ways in which Berlin has responded to the Kremlin’s incursion into Ukraine.

But notice the language and tense: Putin has already “provoked” a response from Germany!

Guttenberg continued: “While scoring a probably Pyrrhic victory, Putin has alienated an important partner. Ironically, he also achieved what no pleas from the U.S. president or fellow European leaders could do: Germany finally assumed leadership on a difficult foreign-policy issue.”

Guttenberg’s invocation of the term “Pyrrhic victory” is interesting. A Pyrrhic victory is a triumph that comes with devastating cost, a victory in which the victor is injured so badly it ultimately ends with his defeat. Guttenberg, it seems, believes there will be fatal consequences for Putin and Russia. When you read between the lines of that statement, one might conclude Guttenberg was actually delivering a warning to Putin. Something akin to, “your actions will come with a heavy price.” You can be sure that statement won’t be lost on Putin!

Sometimes it’s difficult, at least from our vantage point outside of the halls of power, to know precisely how Europe is reacting to Russia’s rise, or what conversations Putin’s actions have inspired inside Europe. It’s hard to ascertain exactly how Germany and Europe are reacting to Russia’s rise. This makes Mr. Guttenberg’s response so significant and informative. This man is close to Europe’s decision-makers—and he’s telling us that Europe has taken notice and is responding.

“As for Europe,” he wrote, “it finally seems to recognize that it needs to be capable of taking care of its own neighborhood. The frozen conflicts in the post-Soviet space have been ignored for far too long. Why did it take a war in Georgia to realize that Tbilisi required more assistance from Europe?” Europe, according to Guttenberg, is now awake to the threat posed by Russia. Get this: “Russia’s behavior toward Ukrainemight hand Europe an opportunity to become more united and effective in its foreign policy.”

This is exactly what Bible prophecy says will happen!

I’ve danced only through the highlights of Guttenberg’s piece. You need to read the whole thing for yourself. And after you’ve read it, watch this Key of David program, and then read “Is Vladimir Putin the Prophesied ‘Prince of Rosh?’” It’s not just the content of Guttenberg’s article that is remarkable—it’s the timing as well!

Mr. Guttenberg concluded his article with a question: “How will the EU and the U.S. react to the—probably inevitable—rise of the Russian people? Let us hope they are not too meek to stand up for the universal values on which they were founded.” It’s classic Guttenberg: eloquent, polite and diplomatic, seemingly non-confrontational and free of drama. But read between the lines; think on the message. Those are fighting words. It’s essentially a battle cry to America and Europe to “stand up” and confront Vladimir Putin. Bible prophecy says America won’t listen. But Europe will—and already is!