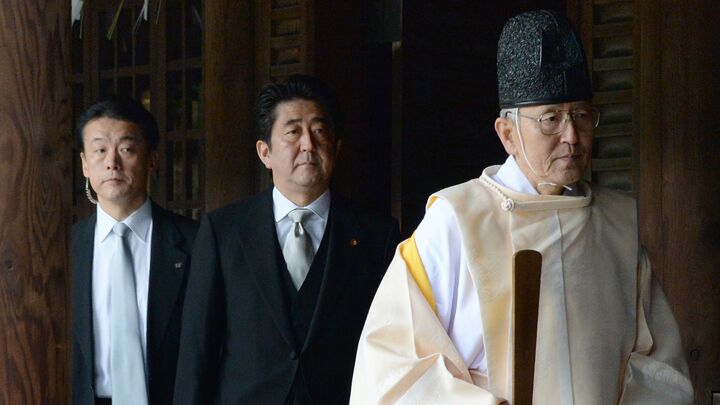 Why did Shinzo Abe visit the Yasukuni shrine?

Japanese Prime Minister Shinzo Abe escalated tension in the already volatile Asia-Pacific region on December 26 when he made a controversial visit to the Yasukuni shrine. The visit came on the one year anniversary of his tumultuous presidency. Abe’s leadership has been marked with a forcefulness not seen from Japan since World War ii.

The Yasukuni shrine is a Shinto shrine built in 1869 that commemorates those individuals who made the ultimate sacrifice defending their nation. There are currently more than 2,466,000 people enshrined at Yasukuni. According to the shrine’s official website, “These people, regardless of their rank or social standing, are considered to be completely equal and worshipped as venerable divinities of Yasukuni.”

This shrine became a source of controversy in 1978 when 14 class A war criminals from World War ii, including Hideki Tojo, were enshrined there, along with other individuals directly connected with many of the atrocities committed by the Japanese during World War ii. The shrine has been a constant source of controversy over the last 35 years, with Japanese politicians frequently visiting the site. These trips have repeatedly caused strife between Japan and its neighbors, namely China and South Korea, who view the shrine as a glorification of Japan’s militaristic past.

Prime Minister Abe’s visit to the shrine, the first by a sitting Japanese leader in seven years, defended his visit, saying that he was simply praying for the souls of those who had died for Japan: “Regrettably, it is a reality that the visit to Yasukuni Shrine has become a political and diplomatic issue,” Abe said. “Some people criticize the visit to Yasukuni as paying homage to war criminals, but the purpose of my visit today, on the anniversary of my administration’s taking office, is to report before the souls of the war dead how my administration has worked for one year and to renew the pledge that Japan must never wage a war again.”

However, Abe’s pledge to never wage war again is belied by many of his policies. Since coming into office, Prime Minister Abe’s has stated that his “life’s work” was to change the pacifist constitution drafted by the Americans after World War ii. He has repeatedly voiced his desire to amend Article 9 which limits Japan’s ability to wage war.

Abe’s policies have been met with plenty of support in Japan. He is one of the most popular leaders in recent years; his approval rating is at 60 percent. Japan’s so called self-defense force is very well equipped, ranking in as the sixth best-equipped army in the world, according to some sources. “We are not pacifist in that sense,” said Narushige Michishita, director of the security and international program at Tokyo’s National Graduate Institute for Policy Studies. “We supported all the U.S. wars, contributing $13 billion to the Gulf war. Japan isn’t remilitarizing—we are already there.” Currently Japan’s active military is larger than the UK’s.

Other Pacific nations have already voiced their desires to purchase some of Japan’s advanced weapons technology, something limited by Japan’s constitution. Japan is one of the most advanced weapons producers in the region. If Japan’s pacifist policies were repealed, it would open up a new avenue of revenue for the nation. At the start of December, the Abe administration announced that the government was working to reverse the limits on weapons exports and permit exports as long as they “contribute to Japan’s national security” or meet other conditions. The vague and open-ended wording of this proposition would extend Japan a lot of freedom to export a range of weapons to various other nations.

Japan’s neighbors have good reason to be concerned about Abe visiting the Yasukuni shrine. He clearly favors a strong Japan, one that the world has not seen in seven decades. bbc reported, “Close observers of the Japanese prime minister say he is at heart a nationalist and a historical revisionist. He believes the trials that convicted Japan’s wartime leaders were ‘victors’ justice.’”

This belligerence on Abe’s part has garnered a lot of negative response from Japan’s neighbors. After the visit, China and South Korea both voiced their disdain, and even the United States made an unexpected condemnation of Abe’s actions. With the tension in the Asia Pacific region being what it is, his actions exacerbate the situation. The current island dispute between China and Japan has fueled a lot of Japan’s aggressive moves.

The Trumpet, and before that the Plain Truth, has forecasted for years that a remilitarized Japan would eventually reemerge as a military superpower. Japan’s disregard of its pacificist constitution in its remilitarization drive is not new, but its recent overt nature of it is highlighting it to the world. Despite all the saber-rattling, the Bible predicts that an alliance will be worked out between a remilitarized Japan and its Asian neighbors, specifically China and Russia. As our booklet Russia and China in Prophecy brings out, as far back as 1963, the Plain Truth stated that, “There is an utter inevitability of the ultimate tie-up between Japan and Red China!” As unlikely as that may seem right now, Bible prophecy clearly shows that the major Asian powers will unite together against a common threat: a mighty European superpower spearheaded by Germany.

Be sure to request a copy of our booklet Russia and China in Prophecy. It will give you context to world events and show you how this soon-coming Asian bloc will lead to the greatest news ever for this world.