Judging by the crowds outside Macy’s, you’d think so. But let’s look deeper. 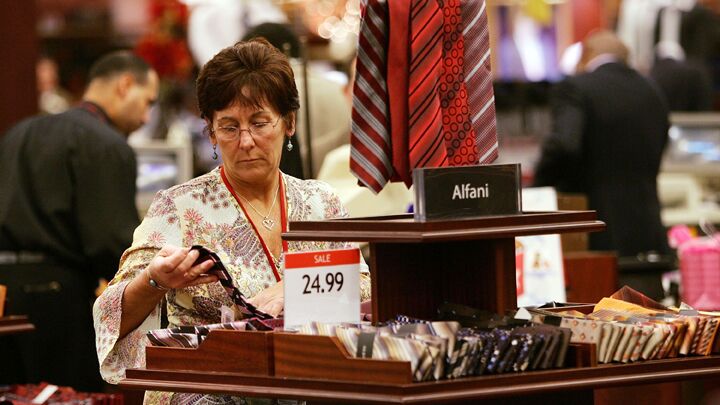 Judging by the crowds outside Macy’s, you’d think so. But let’s look deeper.

The ceo of New York’s flagship Macy’s department store was stunned. “It’s unbelievable,” Terry Lundgren told the Associated Press. “I have never seen anything like it, and I have been at every single one of our openings since my career began.”

He was talking about the 15,000 people who had lined up outside his store to get in on the Black Friday deals this past holiday season.

A record 141 million Americans shopped in stores and online from Nov. 28 to Dec. 1, 2013. That’s nearly half the American population. Millions lined up for hours outside stores, in the middle of the night, in freezing cold weather to spend money. The average shopper spent just over $407.

It’s America’s biggest shopping spree of the year—and in a consumerist nation like the U.S., that’s really saying something.

Looking at these numbers, you would think that America’s economy was booming like never before. But the truth is, the economy is in rough shape right now. The truth is that these millions of American consumers accumulated hundreds and thousands of dollars of additional debt—spending money they don’t have on gizmos and goods they don’t need. The truth is that just a few years ago, America’s economy came within minutes of total collapse—and it isn’t even close to recovering.

Yet people are spending and consuming at a record rate. Does this make any sense?

When we talk about America’s distressed economy, it’s easy to point to the extravagant, bloated government in Washington as the primary cause. But there is a bigger cause.

The buy now, pay later mindset does not begin and end in Washington. It is everywhere.

Saving Ourselves by Spending?

Millions of people are out of work. Official unemployment is stuck at 7 percent—unofficial unemployment is around 13.6 percent. The average credit card debt is $4,878 per person. Fifty million Americans are on food stamps. Half the people in the country get some kind of financial assistance or benefit from the government. And 27 percent of Americans have no emergency savings.

Do people really believe we can indefinitely continue spending money we don’t have, enjoying whatever our heart desires, thinking the bill will magically take care of itself?

That perfectly encapsulates America’s problem: Most economists really believe that the solution to America’s dying economy is to spend more. Meanwhile, the typical American is too distracted by sports, pop culture and other trivial things to care.

In November, former Alaska governor Sarah Palin compared America’s incomprehensibly huge debt to slavery. She said younger Americans will be shackled by the country’s spending and end up beholden to a foreign master.

What was the media’s reaction to that comment? They didn’t address the alarming reality she was drawing attention to. They criticized Palin for her “insensitivity” in invoking slavery!

This is the state of America today. That is how blind we are to what is coming.

But what does God compare America to? That is what America should be concerned with. Proverbs 22:7 says, “The rich ruleth over the poor, and the borrower is servant to the lender.” The word servant means slave, or “servant of a servant”—the lowest form of servant (Gesenius’ Hebrew-Chaldee Lexicon).

That is God’s perspective on debt. And that is where America is headed: slavery.

How much longer can the world’s biggest debtor nation project its power and be respected when it owes more than it can possibly repay? What happens when the dollar loses its status as the world’s reserve currency because we can’t pay our debts?

Time is running out. It won’t be much longer before America’s many lenders come calling for their money. They have already stopped loaning us the money the way they once did.

Most of America’s debt is now financed by the U.S. We print trillions of dollars to finance our addiction to spending. This is why inflation will get much worse and why the dollar is becoming worthless.

Global Research reported on November 20 that between Oct. 1 and Nov. 14, 2013, America rolled over $1 trillion in debt. “Rolled over” is a nice way of saying that America had to borrow more than $1 trillion of new money to pay off old loans that were coming due.

Borrowing new money from investors to pay back money to old investors is the definition of a Ponzi scheme. This is exactly what Bernie Madoff did before it inevitably fell apart and he went to jail.

America might be able to keep its economy on life support for a short while longer because interest rates are lower than they have ever been. But eventually it will come to a crashing end—as all Ponzi schemes ultimately do.

America spends about $220 billion per year on interest. But interest rates are being artificially suppressed by Federal Reserve money printing. Eventually, rates will be forced to rise. Right now the benchmark interest rate in the U.S. is a quarter of 1 percent—nearly zero. What if it returns to 6 percent like it was about a decade ago? All of a sudden America will be paying $1 trillion per year in interest! That is more than a quarter of America’s total budget. And all of this would come at a time when Medicare, Medicaid and Social Security costs are skyrocketing.

This is exactly what happened to the big banks in 2008-09. These banks have so much debt that they must constantly borrow money to keep functioning and roll over existing debt as it comes due. In 2008, credit markets froze—and the U.S. economy nearly collapsed! Even corporate giants like McDonald’s, American Express and General Electric had to get emergency loans to keep functioning. Had the government not been able to loan those billions, those companies would have collapsed.

What happens when the government can’t borrow the money to roll over its debt or cover major American corporations? Who will bail out Uncle Sam?

The Way of Get

In 2010, Oklahoma Sen. Tom Coburn said in a speech at President Obama’s debt commission meeting that “[h]istory says we’re not going to make it.” Democratic republics only last about 200 years before they “rot from within” and then are conquered militarily, Coburn said.

Coburn, however, holds out hope. There is a way to “cheat history,” he said. “The way we cheat history is for all of us to give up something … and then say, ‘The way forward for America is for everyone to start sacrificing so we create a future that is honoring the tremendous sacrifices that came before us.’”

This is a principle right out of the Bible. Psalm 37:21 says, “The wicked borrows, and cannot pay back, but the righteous is generous and gives” (Revised Standard Version).

People have come up with every possible explanation to excuse debt-laden living. But as far as God is concerned, the underlying cause of this curse—and it is a curse—is that we are living the way of get!

These days, everybody has to get something. Washington gets an unlimited supply of credit so it can spend, spend, spend. Americans get generous handouts from entitlement programs. Politicians get more votes if they promise that their voters will get more entitlements. Lobbyists get favorable legislation for their companies if politicians get perks and donations to their campaigns.

And all the while, we reverse-mortgage our future by tacking on more than a trillion dollars in debt every year!

This is a society-widesin. And America’s national economy has become absolutely dependent on it!

The era of big-spending government in the United States will come to an end. Of that, we can be sure. But it won’t be the way many people hope. It is going to take a mighty crash.

Thankfully, God is well aware of the situation. He is allowing us to learn our lesson the only way we can: the hard way. But then He will establish a perfect financial system that will bring opportunity, productive work and prosperity to all mankind.

God’s economic system actually begins with repentance. Americans and people around the world will have to be brought to the point where we are finally willing to change our ways!

“Now therefore thus saith the Lord of hosts; Consider your ways,” Haggai 1:5 says. This is what God thunders to presidential administrations and politicians; to federal, state and county governments; to big corporations, small businesses and entrepreneurs; to chief economists and financiers; to welfare recipients and retirees; to families and individuals.

“Ye have sown much, and bring in little; ye eat, but ye have not enough; ye drink, but ye are not filled with drink; ye clothe you, but there is none warm; and he that earneth wages earneth wages to put it into a bag with holes. Thus saith the Lord of hosts; Consider your ways” (verses 6-7).

Seemingly never satisfied with what we have—with all that God has given us—America continues mortgaging its future in order to feed our lust for things we don’t have the money for.

America is headed for an economic crisis that will dwarf the Great Depression. To prepare for that, as Haggai warned, consider your ways—and turn to God in repentance and faith.

The End of the Empire

America is going to end up just like every other failed empire in history. In a May 1983 Plain Truth article, “Prepare to Greatly Reduce Your Standard of Living,” Herbert W. Armstrong wrote: “Today Britain has lost her empire. … Britain has been on the way down, in national wealth and power, since World War i. And now the United States is starting to follow on the downward path!”

Mr. Armstrong highlighted the real cause of America’s and Britain’s astronomical rise to world power and dominance—as well as the real reason we are falling from power. This reason dates back to many centuries before Christ!

“Once fulfilled, in the British and Americans, retention of it by us became conditional on our performance.

“And what have we done with all this vast wealth, economic prosperity and world power?” he asked.

As Mr. Armstrong went on to say, we have taken all these blessings and corrupted ourselves. We bow before science and technology. We reject God and His knowledge—and instead worship the religion of evolution.

Take a look at America today. Our governments are corrupt. Our business, industrial, economic and commercial systems are shot through with deception, dishonesty, selfishness. And our society is plagued with all sorts of crime and social ills.

“Already the noose is around our necks, and is almost daily tightening! Economic ills are starting greatly to reduce our standard of living!” That was in 1983—and much of what Mr. Armstrong was warning about then is now upon us.

To echo Mr. Armstrong: Prepare now to reduce your standard of living. Tough times are coming.