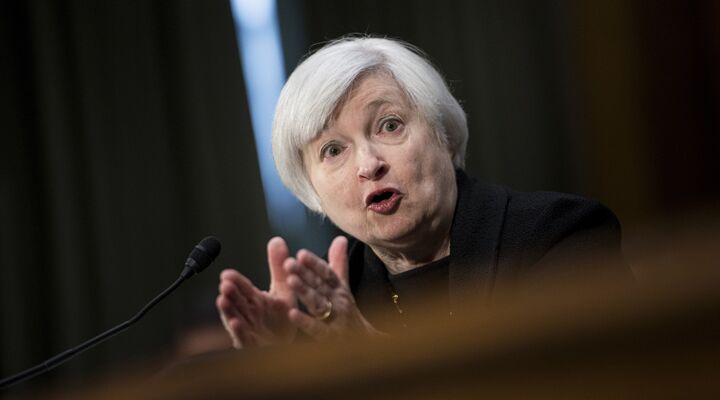 America is an addict. It is hooked on government stimulus, massive amounts of newly printed dollars. On December 18, the Federal Reserve announced it will start weaning the economy. Can Janet Yellen, the soon-to-be Federal Reserve’s new medical chief break America’s addiction before it is too late?

The announcement by the Fed that it will begin tapering its money printing may be its most important announcement since the 2008 financial crisis.

The big question on investor’s minds is: can America’s fragile “recovery” survive without $1 trillion per year in newly manufactured money and near-zero interest rates that it has become dependent on?

But there is another even more important question: Can the economy survive if the stimulus isn’t removed? The same stimulus supporting the economy is now also causing side effects so great that it may soon cause a crisis of its own.

This may be the central concern facing Janet Yellen as she takes over as the chair of the U.S. Federal Reserve Bank in January. How will she keep the patient breathing?

Yellen may not have much time to figure it out. The prognosis is bleak and the market has a way of testing new Fed chiefs.

When Paul Volcker arrived in 1979, the Iranian Revolution sent energy prices soaring. Volcker jacked up interest rates into the high double digits, igniting a deep recession to save the dollar. Alan Greenspan took the lead in August 1987. Two months later, the Black Friday market crash wiped 23 percent off the Dow Jones index. Ben Bernanke was the next Fed chief. He took charge in 2006 and had a little over a year before Bear Stearns collapsed and the subprime crisis became the scariest financial disaster since the Great Depression.

What will be Yellen’s test?

Since the 2008 crash, the Federal Reserve has created over $3 trillion out of thin air to infuse into the economy and prop up banks and consumers. It is likely that the next crash will be self inflicted.

This massive money injection has caused dangerous side effects. All that money encouraged risk taking and caused the stock market to shoot into record high territory. It has caused speculators to dive back into the housing market. Artificially suppressed interest rates inflated the bond market—and are keeping student loans, car payments, and personal loans for debt-burdened consumers affordable.

“The first and most important issue to recognize in the United States … is that the level of uncertainty about the very long-term future is far greater than at any time I particularly remember,” Alan Greenspan told cnn on December 8.

“[T]he extent of government intervention has been so horrendous that businesses cannot basically decide what to do about the future,” he said. “But there’s a different type of problem that’s going to be occurring,” he added referring to the Federal Reserve’s unprecedented stimulus program. “None of us has handled this before.”

America is in uncharted territory—and now it has a new and untested chief doctor.

What will Yellen do?

The Fed said it would cut the $85 billion monthly stimulus by $10 billion. What most people don’t realize is that in 2013 the fed actually averaged $97 billion per month in stimulus, not their officially announced $85 billion.

So the Fed is really only cutting the stimulus back to what it officially was anyway.

Then to top it off, the Fed said that it would extend the length of time it plans on artificially suppressing interest rates to well into 2015.

The tapering announcement could be compared to a rehab clinic reducing an alcoholic’s consumption from 10 glasses of scotch per day to nine—and then adding a half-glass of whiskey.

Yellen knows that as long as the money creation continues, malinvestment and consequent market distortions will grow. People make business decisions and investments based on market conditions. But if those conditions are distorted due to government interference—poor decisions multiply. If too many people make bad decisions, the economy suffers. Yet without the easy money, there may not be much investment at all.

Yellen knows that most of the money the Federal Reserve has created has caused the stock and bond markets to boom, but most Americans are not invested in the markets and don’t directly benefit.

Yellen also knows that all the cheap money has caused businesses and corporations to borrow to fund mergers, acquisitions and other activities. But if she lets interest rates normalize, when these loans come due, these businesses will not be able to afford to borrow new money to pay back the old—and corporate bankruptcies could skyrocket.

The longer the Federal Reserve keeps pumping up the economy, the more erratic the distortions become, and the greater the chance of another economic heart attack.

Janet Yellen may want to taper. She may in fact try to taper. But will she be able to?

In her early years as a regional Federal Reserve Bank governor, she spoke out about the dangers of artificially low interest rates. She also warned Allan Greenspan in 1996 about the danger of cheap money and the policies that led to the dotcom boom and bust. A decade later, she was one of the few Federal Reserve insiders that publicly warned about the risk of subprime mortgages in 2007, just before a certain Great Recession broke out.

In her Senate confirmation testimony in November, Yellen even acknowledged that the longer the stimulus goes on, the greater the danger. “I would agree that this program cannot continue forever, that there are costs and risks associated with the program,” she told Senator Mike Crapo.

Yet the bottom line for Yellen and America is this: America’s debt-addicted economy cannot handle what would happen if the government stopped printing money and let interest rates return to normal.

All told, Americans are carrying around $57 trillion worth of debt. And even that gargantuan number is only scratching the surface. Once you start including all the promises made to Social Security, Medicare and Medicaid, America’s total debt shoots up to way over $100 trillion. It may be closer to $200 trillion, as Boston University’s Laurence Kotlikoff has warned.

With so much debt in the system, any significant rise in interest rates or tightening of the money supply could put a quick end to the delicate “recovery.”

“[T]here are dangers on both sides” of ending accommodation, Yellen told the senators. “It’s important not to remove support, especially when the recovery is fragile,” she said. It would be “costly to fail to provide adequate accommodation” for the economy.

That is Fed-speak for—“I know we are in big trouble, I don’t yet know what to do, so stop asking me.”

The global financial system and economy is poised to implode, warns well-known investor Jim Rogers. “We in the West have staggering debts. The U.S. is the largest debtor nation in the history of the world” (cbc, December 3). The artificial “stimulus” propping up the economy “isn’t going to last,” he said.

The economic history of the United States shows that it seems to have a financial crisis every four to six years. But as Rogers points out, the severity of the crisis depends on the country’s debt burden at the time.

Janet Yellen has a very tough assignment ahead of her. If she stops the money drug, the economy enters extreme withdrawal that could be terminal. If she keeps the stimulant going, the economy might keep staggering on for a while, but the side effects will eventually kill it. What will Janet Yellen’s prescription be?