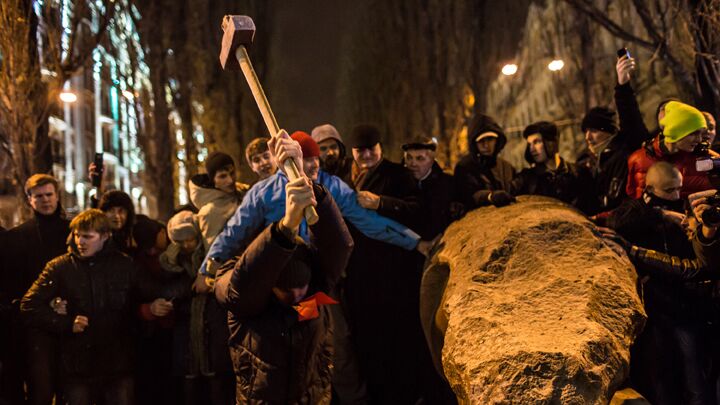 Events in Ukraine highlight three important geopolitical realities, each of which is prophetically significant.

Every decent revolution produces an iconic scene. The 1989 Tiananmen protests had tank man; during Germany’s reunification it was a segment of the Berlin Wall swaying back and forth like a wiggly tooth before finally collapsing; in Baghdad in 2003, it was the slow-motion toppling of the giant statue of Saddam Hussein. On Sunday, the budding revolution in Ukraine got its iconic scene, when, amid protests of roughly 500,000 in Kiev’s Independence Square, angry marchers felled a Vladimir Lenin statue then slugged it to pieces with sledgehammers.

The protesters are upset with President Viktor Yanukovich, and specifically his November 29 decision to reject a free-trade deal with the EU. The decision was seen not only as a rejection of Europe, but an embrace of Russia. Many Ukrainians worry that Yanukovich, despite repeated denials, has struck a deal with Vladimir Putin to form a customs union with Russia.

It’s hard to forecast precisely what will come of Ukraine’s protests. The demonstrations seem to have reached a tipping point: Yanukovich is now in full-scale crisis mode; significant political change in Kiev is a real possibility. However, it’s far from certain this will bring down the government and orient Ukraine’s foreign policy toward Europe. Too few remember that Yanukovich has significant support not only from Russia, but also from roughly half of the population (east Ukraine) that believes Ukraine belongs in Russia’s orbit. (More than 30 percent of Ukrainians speak Russian.)

Whatever the outcome, events in Ukraine highlight three important geopolitical realities, each of which is also prophetically significant.

First, Ukraine reveals the regional supremacy of Vladimir Putin. Russia’s president, more than anyone else, is responsible for Yanukovich’s refusal to sign the trade pact with the EU. Prior to Ukraine’s November summit with the EU, Putin made it clear to Yanukovich that there would be ruinous consequences—tariffs on Ukrainian exports to Russia and its allies, steeper energy prices—if Kiev reached out to Europe. Putin schmoozed Yanukovich too, promising Ukraine lower energy prices, debt forgiveness and lower tariffs if it rejected Europe and joined Russia’s customs union.

Yanukovich was in an unenviable position. When it comes to Russia’s periphery, Vladimir Putin doesn’t mess around. Just ask Georgia, the Chechens, and Ukraine’s former pro-EU opposition leader, Viktor Yushchenko. Imagine you were Yanukovich and Putin was pressuring you like this. What would you do? For Yanukovich, and in some ways for Ukraine, rejecting the free-trade agreement with the EU was the safest, most logical move.

But it seems millions of Ukrainians disagree. Today, in spite of the brutally cold weather, Ukraine’s pro-Europe demonstrators don’t appear to be ready to give up. Opposition leaders continue to demand major concessions, including Ukraine’s reorientation toward Europe. Unless President Yanukovich clears the protesters, either by agreeing to their demands or cracking down hard (which would likely get violent), his government could soon be in serious jeopardy. If Ukraine isn’t experiencing a revolution, it’s on the cusp of one.

The man to watch right now is Vladimir Putin. What’s his next move? It is hard to overstate how central Ukraine is to Putin and his supreme goal of restoring the Soviet empire. Geographically and strategically, Ukraine was the core of the former ussr, and as far as Putin is concerned, the nation isn’t up for discussion or negotiation. To Putin, as Richard Palmer explained last week, Ukraine isn’t a sovereign nation; it’s part of Russia. Putin will do whatever it takes to ensure Ukraine belongs to him.

The best-case scenario for Putin is that the protests blow over and that the Yanukovich government survives. But the longer this goes, the unlikelier this is. Putin has options should he decide on intervention. He could provide military support to Yanukovich, raise energy prices, levy Ukrainian exports into Russia, or impose any number of economic measures designed to send a shot across the bow of the pro-West protesters. But getting tough with Ukraine right now is risky as it would only inflame anti-Russian sentiment. Putin could also try to schmooze unhappy Ukrainians by offering them cheaper gas, debt forgiveness and even greater trade and commerce. But he’s tried this already, and it wasn’t effective. Whatever happens, the longer the protests continue and the shakier the Yanukovich government becomes, the more anxious Putin will grow.

And an anxious Putin is a dangerous Putin!

Second, events in Ukraine expose Europe’s crisis of leadership. It is shocking how ill prepared Brussels was for Yanukovich rejecting the EU trade agreement. Its response to the rejection and the subsequent crisis has been abysmal. It’s no secret that Ukraine is a vital strategic interest to Putin, and that he would vehemently oppose Kiev flirting with Brussels. Why didn’t the EU anticipate Russia’s response and create a strategy to counter the Kremlin and win Ukraine? Instead, the EU seems to have been caught off guard. From the outset, the EU has been behind the eight ball, cobbling statements, hatching plans on the run, and in general, reacting to events.

(Other than horrible leadership, the only other explanation for Brussels’s impotent response to the failed trade pact is that it had already made the decision to concede Ukraine to Russia. But if this was the case, why would the EU even attempt to enter a trade pact with Kiev?)

This trade agreement with Ukraine presented Europe with a historic opportunity: the opportunity to pry Kiev from Moscow, effectively gutting Russia of its most strategically important ally, and creating a new, advantageous geopolitical order both regionally and globally. Without Ukraine, Putin’s power base would suffer enormously, hampering his ability to project power globally, including in the Middle East, the Caucasus and Central Asia. What a victory this would be for Europe and America!

Going after Ukraine wouldn’t be easy or inexpensive—after all, losing Kiev is Putin’s worst nightmare, and there is little he wouldn’t do to hold on to Kiev. But if Europe could muster €10-15 billion, a strong moral and political consensus, and a united and tough diplomatic stance toward Russia, it would stand a chance of stealing Ukraine from Putin. It all comes down to leadership: If Europe had the right leadership—and subsequently, a strong, coherent, united foreign policy—it could at least go toe to toe with Putin in Ukraine. Instead, the EU bobbles and blunders.

For Europe, events in Ukraine once again expose the Continent’s crisis of leadership and the need for this to change—and soon!

The leadership Europe needs is going to have to come from Germany. There are already hints that Berlin might be beginning to exert itself in Ukraine and push back at Russia. Early on in the crisis, Germany’s foreign minister visited Kiev, where he met with opposition leaders and pledged support of the pro-West demonstrators. On Monday, Spiegel Online reported that German Chancellor Angela Merkel is ready to lead European leaders in an effort to cement Vitali Klitschko, a former heavyweight boxer and popular opposition figure, as the primary rival of president Viktor Yanukovich.

Third, events in Ukraine are the product of America’s introverted foreign policy. “The anti-government demonstrations are an important moment for the future of Europe,” wrote the Wall Street Journal this week, “though you wouldn’t know it from America’s indifference.” Charles Krauthammer made a similar point last Friday: “As with Iran’s ruthlessly crushed Green Revolution of 2009, the hundreds of thousands of protesters who’ve turned out to reverse this betrayal of Ukrainian independence have found no voice in Washington” (emphasis added).

In the past, the U.S. would have worked with Europe to lend support, both symbolically and practically, to any large-scale democratic venture by Ukraine to reach out to the West. After all, it’s in our strategic interest. But not today. U.S. foreign policy in Eastern Europe under the Obama administration consists of two overarching principles: avoid conflict with Russia, and withdraw both strategically and diplomatically. Both principles were evident in 2009, when President Obama abandoned America’s promise to install a missile defense shield in Poland and the Czech Republic. They were present a little while later when Obama ignored an official letter from regional leaders expressing alarm at Russia’s return to imperialism. And both principles are evident in Ukraine today.

On Monday, Victoria Nuland, America’s assistant secretary of state for European and Eurasian affairs, during meetings with Russian ministers, “expressed U.S. deep concern about the situation in Ukraine, and urged Russia to use its influence to press for peace, human dignity and a political solution.” Does the U.S. government really believe the solution to Ukraine will come from the Kremlin?

Beyond the geopolitical import of these three realities, each is also of enormous prophetic significance.

Take Vladimir Putin. Did you know the Bible prophesies of a powerful leader emerging from Russia in the end time? The prophecy is in Ezekiel 38. It discusses the “prince of Rosh and Meshech and Tubal” emerging to lead a gigantic Asian bloc of nations. Rosh, Meshech and Tubal are the biblical names of Russia, Moscow and Tobolsk (the Asian capital of Russia). If you haven’t watched it already, you need to see Gerald Flurry’s recent Key of David program “Russia in Prophecy.” He explains the prophetic significance of Vladimir Putin and his goal of rebuilding the Soviet empire in detail.

Europe’s leadership crisis is also prophetically significant. Bible prophecy says that a strong man, a decisive, authoritative leader, is going to be invited to lead Europe (see Daniel 8). Watching Europe’s handling of the Ukraine crisis, at least so far, it’s not hard to see the desperate need for leadership and how the people might invite someone new, someone bold and fresh, someone strong and commanding, to fix things, unite the Continent and stand up to Russia. In October 2008, following Russia’s invasion of Georgia, Mr. Flurry warned specifically that a crisis in Ukraine could give rise to a strong leader who would unite Europe. “Will a crisis occur over Ukraine?” he asked. “That area is the breadbasket of Russia, and surely it is willing to wage war over that as well.” Is this the crisis over Ukraine Mr. Flurry forecast?

Then there’s America’s introverted foreign policy, which is evident in Ukraine and virtually every other corner of the planet. This too is prophetically significant. God says in Leviticus 26 that He would break the pride of our power. In fact, the theme of our January issue of the Trumpet, our free, full-color print magazine, is about what a post-American world will look like. It explores the alarming ramifications of America’s conscious decision to leave regions like Eastern Europe. Without the presence of the U.S. in Eastern Europe, frightening men like Vladimir Putin will have free rein.

Keep an eye on Ukraine and these three geopolitical realities.