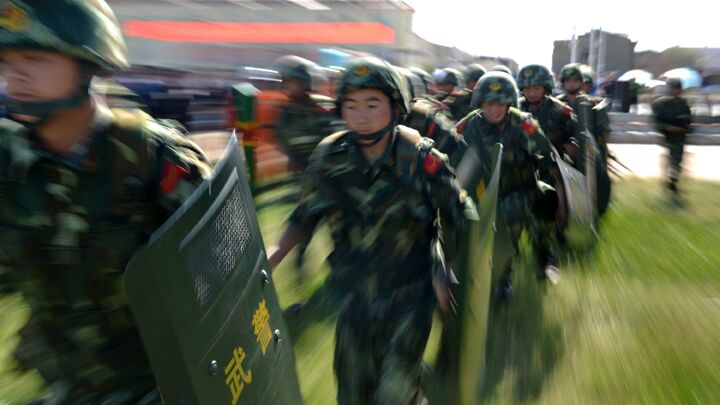 If he were willing to learn from history, President Obama could understand the danger in inviting the Chinese military onto U.S. soil.

For the first time in U.S. history, Chinese Communist troops conducted exercises on U.S. soil. The administration says this was an important opportunity for America and China to get to know each other better and build trust. But is inviting your enemies into your house really such a good idea?

The Chinese troops took part in joint “disaster relief” drills with U.S. soldiers in Hawaii on November 11-14. The operations simulated a joint response to a disaster striking a third party nation. It was billed as a lesson for the Chinese to learn about America’s ability to be “flexible” in disasters.

Besides being the first on U.S. territory, it was also the largest cooperative to date between the two armies.

Xinhua Agencies reported U.S. military Pacific Commander, Samuel Locklear, saying that the joint maneuvers will help “improve the relationship between the United States and China” and that “this kind of exercise gives us a place to start, and get into the rhythm of understanding and trusting each other.”

Although the joint excises may be the first with Chinese troops on U.S. ground, it is not the first time the U.S. has invited less-than-friendly foreign militaries to train with and observe its forces.

The Navy is increasingly training with less-than-friendly nations too. In September, Chinese and American naval forces conducted joint disaster response maneuvers with the Chinese Navy off the coast of Hawaii.

In 2012, America invited Russian naval vessels for the first time in history to participate in the Rim of the Pacific war games exercises of Hawaii. The military drills, described as the world’s largest maritime exercise, was originally intended to illustrate the naval power that could be used against Communist Russia. Last year was also the first time that U.S. ships in the rimpac war games sailed under foreign direction. At Washington’s request, China will participate in rimpacfor the first time next year.

U.S. policy makers see these military exercises as a way to foster trust between nations. They see them as a critical first step in reducing the chances of international accidents and eventually turning these nations from enemies to allies. But inviting enemies into your house in an attempt to make them friends, or even just to learn more about their capabilities, is a dangerous game. Just ask King Hezekiah.

Hezekiah was considered one of Judah’s greatest kings. Under his rule, God blessed the nation. The population of Jerusalem quintupled under Hezekiah’s reign. It was a time of expansion of power. Archaeologists note dramatic population growth, major building and construction projects, and large increases in literacy and written works.

Yet despite all of the advances, the king also set in progress a series of events that would lead to the nation’s destruction.

During Hezekiah’s reign, the Assyrian empire was sweeping south toward Judah. The Assyrians, known for their exceptional brutality, had already destroyed the northern kingdom of Israel, carrying them away into captivity.

The book of Isaiah describes the Assyrian rival, the king of Babylon, sending emissaries with presents to King Hezekiah. “And Hezekiah was glad of them, and shewed them the house of his precious things, the silver, and the gold, and the spices, and the precious ointment, and all the house of his armour, and all that was found in his treasures: there was nothing in his house, nor in all his dominion, that Hezekiah shewed them not” (Isaiah 39:1-2; emphasis added).

It appears Hezekiah was beginning to look to men for safety instead of God. He was vainly showing the Babylonians his fantastic wealth in an attempt to convince them to form a military alliance with him. He took them into his house, blindly trusting that they would never use what they saw against him. But was that a good idea?

Look how it turned out. As Gerald Flurry wrote in his booklet Isaiah’s End-Time Vision,

Isaiah did not trust the king of Babylon. He recognized that Hezekiah was getting too close to Babylon. … Isaiah showed that this relationship would prove to be fatal, not only for Hezekiah’s descendants, but for the nation of Judah as well. “Then said Isaiah to Hezekiah … Behold, the days come, that all that is in thine house, and that which thy fathers have laid up in store until this day, shall be carried to Babylon: nothing shall be left, saith the Lord. And of thy sons that shall issue from thee, which thou shalt beget, shall they take away; and they shall be eunuchs in the palace of the king of Babylon” (Isaiah 39:5-7).

This action by Hezekiah—inviting a foreign nation pretending to be a friend into his house—was the beginning of the undoing of his family and of the nation of Judah. Not long after, the king of Babylon—Hezekiah’s supposed ally—destroyed God’s temple and carried the nation of Judah away captive.

But lessons from the Bible don’t carry much weight with America’s leaders today.

If you can believe it, America is even set to allow the Russian space agency Roscosmos to set up half a dozen monitoring stations within the United States. These monitoring stations, according to Russian officials, will be used to improve the accuracy and reliability of Russia’s Global Navigation Satellite System—the same system used to guide ballistic missiles and military attack aircraft to their targets.

The U.S. State Department is set to allow Russia to build the stations despite protests from the cia and Pentagon. U.S. counterintelligence officials worry that the stations could be used to spy on the U.S. The State Department doesn’t think that is too much of a threat. To them this is a more important opportunity to help mend the Obama administration’s relationship with Russian President Vladimir Putin, according to the New York Times.

Does allowing Russia to set up military installations in the U.S. really seem like a good idea?

It is bad enough that America already allows Germany—its old World War ii adversary renowned for surprise blitzkrieg attacks—to train forces and operate fighter/bomber aircraft in the U.S. The German Air Force has been training its aircrews on various bases in the United States since the late 1950s. But in 1996, the U.S. government gave the German government permission to permanently station fighter aircraft at Holloman Air Force Base in Alamogordo, New Mexico. The base now holds about 600 personnel and 21 fighters. With the March announcement that German Air Force units at Fort Bliss will transfer to Holloman, the numbers at this base may swell further. Up to 900 German personnel and 42 fighter aircraft are allowed at the base.

“Right now, Germany seems to be an ally of the United States. But what if this nation—our archenemy in World Wars i and ii—turned against us in the next war?” Gerald Flurry wrote in the latest print edition of the Trumpet. “We want to trust Germany, but history screams that we shouldn’t! Yet, not only do we equip the Germans with our weapons, but we train their air force on American bases. … What the U.S. is doing is absolutely condemned by the Bible. Why? Because it is trusting other nations rather than trusting God.”

Our gamble with China, Russia and Germany is going to go deadly wrong.

In recent years, China has engaged in rampant intellectual-property theft through cyberattacks. It has led the world in industrial espionage. Chinese agents have been caught stealing military secrets. It has sold arms to the Taliban. It has attacked U.S. satellites with lasers. It helped North Korea transfer missile technology to Iran and Pakistan. It has helped Iran with its nuclear program. And made known its ability to crash the U.S. dollar by selling its massive stockpile of U.S. treasuries.

How about Russia? Just this past month it blackmailed Ukraine into staying out of the EU by threatening to cut off gas and oil supplies. It punished tiny Moldavia for the crime of seeking more economic ties with Europe. And only a few years ago, it invaded U.S. ally Georgia. Now it is harboring whistle-blower Edward Snowden.

Does this sound like a nation we should be opening our doors to?

And then there is Germany. Although Germany seems like a friend now, can you guarantee it will always be so? Bible prophecy says that America’s friendship with Germany will not last for long (you can read about that in Germany and the Holy Roman Empire), and the end result will be devastating.

Inviting enemies into your house is the type of mistake you only make once! It opens up the potential to be attacked and destroyed from within.

Is this really a risk worth taking? History shows it can be a deadly one. Just ask King Hezekiah.