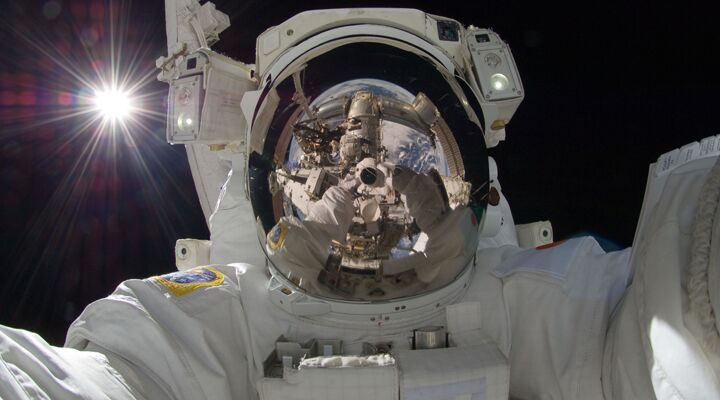 It is, perhaps, mankind’s greatest dream. Has any technology captured the world’s imagination as much as space travel? We didn’t reach the moon until 1969. Before 1992, we knew of no planets outside of our solar system. Nothing made by man has ever visited another star. Yet so many books, movies, television shows and video games revolve around the idea of man traveling to the stars. We’re fascinated with it!

The question is, can we ever make this dream reality?

Astronomers have now discovered thousands of planets outside the solar system. Our galaxy alone probably contains hundreds of billions of them. A recent study concluded that the Milky Way contains 8.8 billion Earth-size planets that orbit stars at a distance that would allow them to support life.

How long before we get to visit them?

Well, space is incredibly huge, and we have made virtually no progress toward fulfilling our dream of zooming around the stars. Depending on your perspective, this is either fairly depressing or incredibly inspiring.

Voyager—Out of the Solar System?

Actually, space probes have been “leaving the solar system for the first time” since 1983. The trouble is there are many different places you can draw an imaginary line and say this marks the edge of the solar system. By several of these definitions, Voyager isn’t even close to leaving yet!

How long before you’ll never see another headline that says, “Voyager leaves the solar system”? How long until we know Voyager has really reached the stars (beyond our own)? Thirty thousand years. That’s how long it will take, according to our best guess, before the probe passes through the Oort Cloud—a field of rocks, comets and other debris that orbits our sun and marks the outer limits of the sun’s reach.

And to be extra sure, we should wait another 10,000 years before Voyager passes the final waymark that could be considered the edge of the solar system: the point at which the sun’s gravity is no longer the dominant pull on the probe.

How long before Voyager 1 would accomplish the elusive goal of interstellar travel? Well, if we had pointed it in that direction, it would have reached the next-nearest star sometime around the year 77013.

It’s not that Voyager is slow. It’s one of the fastest-moving man-made objects ever—behind a few other space probes and a manhole cover that accidently got shot toward orbit in a U.S. nuclear test.

Voyager 1 is traveling at 38,000 miles an hour. It covers 1 billion miles every three years. But that’s still not fast enough to reach the stars!

Can We Go Faster?

For our science-fiction dreams to ever become reality, we will have to go much faster than 38,000 miles an hour. Is that possible with current technology?

Actually it is. The nuclear-launched manhole cover gives us a clue how. We’ve reached the limits of what is possible with chemical rockets—but we could knock it up a level with nuclear power.

The earliest—and perhaps most insane—idea for a nuclear-powered rocket was quite simple. During the 1950s and ’60s, General Atomics designed a “so crazy it just might work” nuclear rocket called Project Orion. The rocket, fitted with heavy-duty shielding, would simply keep throwing nuclear bombs out the back, and ride the blast waves forward. By exploding one nuclear bomb every second, the rocket would accelerate to incredible speeds—around 20 million miles an hour. That’s 500 times faster than Voyager.

There were drawbacks. It would take detonating 800 nuclear bombs to get into orbit. But this was seriously considered a viable way to launch a manned mission to Jupiter and Saturn. It was ultimately canceled since nasa had to focus on reaching the moon by the end of the 1960s.

However, even if the Orion ship were constructed, traveling at 20 million miles per hour would take 130 years to reach the nearest star. And at the end of its journey, the rocket would have no way to slow down. After over a century of waiting, it would zoom through the star system in a matter of days.

Other nuclear-powered projects require technology we just don’t have yet. For example, Project Daedalus, designed by the British Interplanetary Society in the 1970s, would reach another nearby star, Barnard’s Star, in 50 years—though it, too, would have no way of slowing down. However, this ship was designed to use a type of helium mined from Jupiter—not something we’ll be doing anytime soon.

But nuclear propulsion is not the only way. One elegant solution is for the spaceship to leave the propulsion system behind. High-powered lasers in space could focus on a ship with a very large sail. With enough power, these lasers could push the ship forward.

But we’re talking a lot of power: space-based lasers consuming the equivalent of all the electricity currently generated by the human race. And it would have to be a big sail, too—close to the size of Poland. Even then, the mission would take decades—not the hours or minutes we see in science fiction.

In Our Mind’s Eye

So far, we have merely discussed the propulsion system. We also have to overcome a host of other engineering problems. For example, our fast-moving, Jupiter-helium-powered vessel would need heavy shielding to prevent mere space dust from puncturing its hull. And we haven’t even touched the logistics involved in a manned mission.

If there is somehow a way to go faster than the speed of light—and mankind could sustain the effort to build the necessary ship and overcome the other hurdles to manned interstellar spaceflight—we could finally reach our dream of visiting the stars of our galaxy. And that is a big if.

Yet even in science fiction, we rarely get out of our own galaxy. In the most optimistic of sci-fi blockbusters, man usually sails among the stars—of his own galaxy. Even our imaginations only have us traveling one or two galaxies—out of an estimated 120 billion.

Why? Perhaps it’s the distance: Our nearest galaxy is 2.5 million light years away. Orion—the nuclear-bomb-powered starship—would take 85 million years to get there. Maybe it’s hard even for fiction writers to imagine bridging that gap.

And that’s just in the observable universe. What astronomers detect could be only a tiny fraction of everything that is out there. For all we know, the universe could be infinite.

Even in our wildest imaginations, we reach only a few of the stars. But all of them, or even 1 percent of them? Completely out of the question. Even in our heads we can’t travel that far.

Is that it then? Is man a nonentity as far as the universe is concerned?

How We Will Reach the Stars

The Bible says otherwise. Throughout it, God indicates that man plays a central role not only on Earth, but in His universe-encompassing master plan. Romans 8:19-22 say that “the whole creation” groans and suffers as it waits for “the manifestation of the sons of God.” The whole creation. All septillion stars? Really?

Hebrews 2:8 states that God has put “all things in subjection” under man. The Moffatt Bible translates “all things” as “the universe.” The verse goes on to say that God has left “nothing that is not put under him.”

“In other words, for those willing to believe what God says, He says that He has decreed the entire universe—with all its galaxies, its countless suns and planets—everything—will be put under man’s subjection” (Herbert W. Armstrong, The Incredible Human Potential).

That verse goes on to say, “But now we see not yet all things [the endless universe] put under him [man].”

Hebrews 2:8 is not an isolated scripture. Many other verses reveal that God’s plan for mankind includes the whole universe.

How can this be? Even if we invent some as yet completely unknown way of traveling faster than light, man can’t hope to have any impact on the universe.

The Bible gives us the answer: God is going to change man! It’s the only way these promises of traveling the universe can be carried out.

1 John 3:2 tells us, “Beloved, now are we the sons of God, and it doth not yet appear what we shall be: but we know that, when he shall appear, we shall be like him; for we shall see him as he is.” We will be like God is, having the same tremendous power, intellect and existence. Philippians 3:21 is more explicit: It states that God will “change our vile body, that it may be fashioned like unto his glorious body ….”

Again, this truth is found throughout the Bible—these are just two scriptures of many. And it makes sense; there’s no other way God could possibly put the whole universe in subjection under man. It’s simply too vast.

“Our potential is to be born into the God Family, receiving total power!” Mr Armstrong continues in The Incredible Human Potential. “We are to be given jurisdiction over the entire universe!

“What are we going to do then? These scriptures indicate we shall impart life to billions and billions of dead planets, as life has been imparted to this Earth. We shall create, as God directs and instructs. We shall rule through all eternity! Revelation 21 and 22 show there will then be no pain, no suffering, no evil, because we shall have learned to choose God’s way of good. It will be an eternal life of accomplishment, constantly looking forward in super-joyous anticipation to new creative projects, and still looking back also on accomplishments with happiness and joy over what shall have been already accomplished.”

This is a future far greater and far bigger than anything imagined by man’s fiction writers.

The human mind can’t come close to understanding the vastness of space. But as we get better at it, we clearly see two things: how tiny and insignificant man is by himself—and just how huge and wonderful is the plan that God has for us!