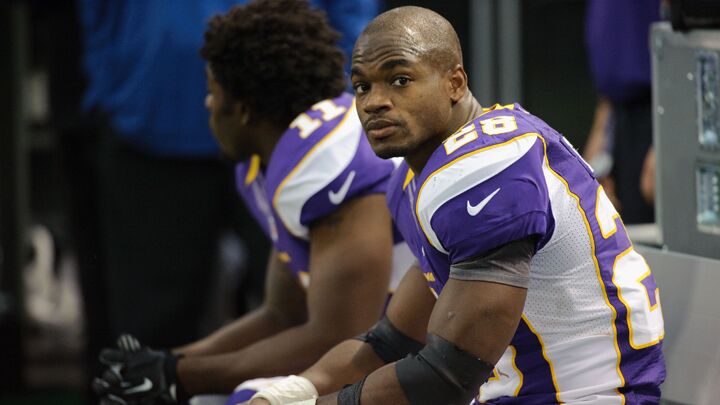 Something good can come from the death of Peterson’s son.

National Football League mvp Adrian Peterson announced he would play in the October 13 game against the Carolina Panthers. This would not be news, except that his son had just been murdered.

“I never thought about not playing,” Peterson said. “It was all about going out there and praying that I had the strength to get through and help my team ….”

The biggest names in sports entertainment rallied to Peterson.

“My deepest condolences goes out to Adrian Peterson and his family! Sending prayers up for you homie,” Miami Heat’s Lebron James tweeted. “Nothing I can say can help u through.”

“Man this is crazy man, prayers up to Adrian Peterson and his family,” Oklahoma City Thunder star Kevin Durant tweeted.

“God wants good to come from it,” Peterson told a reporter before the game. “I’m still hurt and feel the pain of life, but I’m able to function because of the peace and joy of knowing my loved ones are in a much better place.”

Praying. God. Peace and joy. Pushing through. Condolences in the face of tragedy. Those are the impressions everyone seems to be focusing on.

The death of Peterson’s 2-year-old “son” is tragic. Because he was allegedly beaten to death by his mother’s latest boyfriend. Because she reportedly had to have a paternity test to try to find out who the boy’s father was. Because it was another man who claims to have actually raised the child over his short life. And because of a reason no one wants to talk (or tweet) about: To his own father, Tyrese Ruffin did not even exist.

Peterson never went to meet the boy he fathered until he found out that he was in the hospital on life support.

Why didn’t Peterson know he had a son until it was too late? Because Peterson, like so many sports “heroes,” had sex with so many women that he can’t even keep track of the children he has fathered. That is the crude reality.

Peterson apparently has at least five children by four different mothers: a 2-year-old and 6-year-old with his current girlfriend. A 4-year-old with a Dallas stripper. A 3-month-old with a waitress in Minnesota. The New York Post says Peterson has two other children. These are the children he is providing financial support to. There may be others he has even less to do with.

The Peterson tragedy is a tragedy of fatherlessness.

About 25 million American children live in single-parent homes. That’s every third child you see. In some parts of the country, only one out of every 10 live with both their parents. Children born today have the lowest chance ever of living with Mom and Dad. Only about half will make it to age 15 with both parents. We’re not talking about happy homes, healthy homes—just homes that have both parents.

This is an absolute calamity. And the results are catastrophic: aggression, hyperactivity, delinquency in adolescence, criminality as adults, injury and illness in adolescence, school problems and dropping out, emotional health. All these problems are strongly linked to fatherlessness.

Studies consistently show that children raised by unmarried mothers do the worst, by far. Conversely, the family structure that produces the best outcome for children—by far—is two married biological parents. That is not just opinion or religious idealism. It is the finding of virtually every scientific study conducted on the topic.

“I know of no other set of important findings that are as broadly accepted by social scientists who follow the technical literature, liberal as well as conservative, and yet are so resolutely ignored by network news programs, editorial writers for the major newspapers and politicians of both major political parties,” writes American Enterprise Institute scholar and author Charles Murray (Coming Apart; emphasis added).

“From the founding until well into the 20th century, it was unquestioned that children should be born only within marriage and that failure to maintain that state of affairs would produce catastrophic consequences for society. … [F]or the first time in human history, we now have societies in which a group consisting of a lone woman and her offspring is [considered normal]” (ibid).

America’s families are disintegrating, welfare rolls are at record highs, crime is billowing, our jails are overflowing—and no one seems to care, let alone have a solution.

Writing on the Adrian Peterson case, the Baltimore Sun’s Susan Reimer drew this moral lesson: “Real men don’t have to take responsibility for a handful of children they never saw coming because real men wear condoms when they are having sex with women they barely know.”

Is that it? That’s the lesson? Can’t we do better than that? What a pathetic solution.

The truth can be tough to take, but if America wants to fix its problems, it needs to fix its families! And no matter how substantial the majority is that believes otherwise, that means men need to stop having sex with women they are not married to!

Family is the foundation of civilization, and without strong families, the nation is guaranteed to collapse. That is a lesson of history. But who really believes that today? America, its political leaders, its celebrities and its so-called religious leaders with their self-righteous, don’t-judge, what-people-do-at-home-is-their-business mentality, think they know better.

And America is dying.

On October 21, Joseph Patterson, the man accused of beating little Tyrese Ruffin to death, was indicted with second degree murder. But there is more than one person responsible for that child’s death.

For sure, the multitude of blame falls on Joseph Patterson. But let’s not completely absolve the woman, who chose to have a baby without a father and chose to live with a man who had a history of domestic and child abuse.

American society should share the blame too. Out-of-wedlock births are just a regular part of life. The government promotes it with its welfare system. Unwanted births are easily covered up by an abortion system that eliminates over a million babies per year. Feminists see single parenthood as empowerment. Hollywood glorifies it.

But near the top of the blame list—and I know I will get flak for this—is Adrian Peterson, nflmvp, all-American, player of the year, etc.

It is a father’s God-given job to provide for and protect his children. That goes far beyond just sending a paycheck. But how can you do that when you have slept with so many women you don’t even know where all your children are? How can you defend children who not only don’t live with you, but live with complete strangers? How do you love, teach and correct children when they are so scattered across the country you barely see them?

Peterson should have been there for his son, but he wasn’t.

Millions of children are growing up without fathers, and we waste our energy arguing whether the Washington Redskins needs to change its name, or talking about how evil Michael Vick is for betting on illegal dog fights. This nation is self-destructing—and we are worried about dog fights? Are we so enamored with our five channels of espn and movies on demand that we are willing to ignore what is happening to our nation?

People like to talk a lot about God. They will tweet about His mercy. They will talk about sending prayers up. They will say they rely on Him for strength to get through trials.

But do people really believe God and do what He says?

It is so easy to sound religious. But it is actions that Christ is most concerned about. He wants us to not only believe in Him, but to do what He says! And doing what He says is summed up by obedience to God’s commandments—one of which is: You shall not commit adultery.

We may cry out to God, but unless we actually are doing our best to obey Him, don’t expect Him to hear.