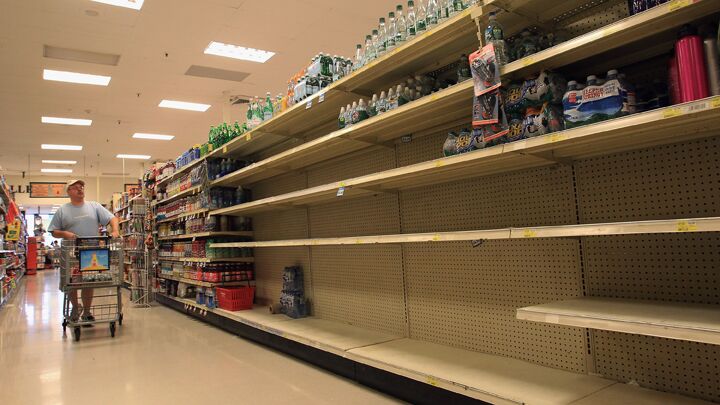 Food stamp recipients in Louisiana thought they hit the jackpot on Saturday. A glitch caused their food stamp debit cards to show unlimited spending benefits. How did many of them repay the generosity of their country?

Let’s just say it didn’t take long for word to spread. Masses of shoppers descended on the local Walmarts in Mansfield and Spring Hill, Louisiana.

“It was definitely worse than Black Friday. It was worse than anything we had ever seen in this town,” said Springhill Police Chief Will Lynd. “There was no food left on any of the shelves, and no meat left. The grocery part of Walmart was totally decimated.”

People were pushing and shoving and fighting for carts in an effort to get all they could.

So many shoppers began to cram into the stores that police had to be called—not to stop shoppers from fraudulently using their food stamp cards to steal—but for crowd control. Shoppers were lined up with two, three, six, even 10 shopping carts stuffed to the brim with food and other goods.

In Spring Hill, eventually, one Walmart had to shut its doors to shoppers—again, not to prevent Food Stamp fraud—but because so many people were crammed inside that the store was becoming a fire hazard.

Shoppers were filling up their cars, going home, and coming back for more.

One shopper told cbs news that it was just a normal “human reaction” to stock up when given the opportunity.

Other grocery stores refused to accept the food stamp debit cards until the system was fixed.

Spring Hill police said that they informed Walmart that they had the right to refuse the faulty food stamp cards, but Walmart corporate headquarters told the local stores to let the people purchase whatever they wanted with the cards.

When the Spring Hill Walmart announced on their speaker system that the food stamp glitch had been fixed, shoppers abandoned their stuffed shopping carts where they stood. YouTube footage shows row after row of shopping carts filled to the brim with stuff left behind by disappointed opportunists.

This whole episode says a lot about America. Thousands of shoppers eagerly stole as much as they could. America’s biggest retailer abetted them, ostensibly to ensure they could “get food for their families,” and the police when called, were unable to do anything about it besides making sure the looting was orderly and efficient.

Economist Roger Babson became famous for warning that America faced “the worst business depression that our generation has ever experienced.” That was in 1920 and early 1921. When he predicted it, people were amazed because America seemed so prosperous. Babson knew something they didn’t.

“The test of a nation is the growth of its people—physically, intellectually and spiritually,” Babson said. “Money and so-called ‘prosperity’ are of very little account. Babylon, Persia, Greece, Rome, Spain and France all had their turn in being the richest in the world. Instead of saving them, their so-called prosperity ruined them.”

After the Depression that Babson predicted hit, he gave a speech at a conference in Chicago. This time, his words carried more weight. His words carry a stark warning for America today too.

“You gentlemen looked at bank clearings, indexes of business activity, stock car loadings, stock market quotations—you looked at the thermometers on the wall; I looked at the way people as a whole were dealing with one another. I looked to the source which determines future conditions. I have found that that source may be defined in terms of ‘righteousness.’

Where is America today on the righteousness scale?

The nation’s culture is obviously rapidly degrading. When so many people not only see absolutely no problem with stealing—and stealing from people trying to help them—but also go out of their way to steal as much as possible, casually, in broad daylight for the whole nation and world to see, you know which side of the righteousness scale America is on.

Can anybody really argue that we are not, as Babson warned, “headed for bad times”?