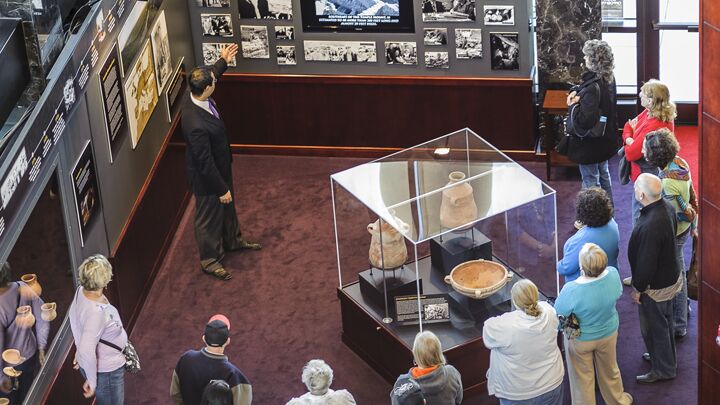 You turn off Bryant Avenue in northern Edmond, pass through a landscaped entrance and parking lot, and pull to a stop next to a building that stands out in this semi-rural setting. You walk up the steps, through a colonnade of 12 gigantic pillars, and into Armstrong Auditorium. This is the home of the archaeological exhibit “Seals of Jeremiah’s Captors Discovered.”

Inside, the exhibit blends into its surroundings of cherry paneling, emperador marble and glass. Above hang three huge crystal chandeliers. Looking around at the lobby’s crystal candelabra and marble feature walls, some first-time visitors briefly forget that they’ve come to see an exhibit.

“This makes me feel like royalty,” one guest recently said.

Tour guides have learned that they often have to introduce the building first, giving a few facts and answering a few questions, but once you’re ready to focus on the exhibit you came to see, you’re in for a treat.

All the artifacts at “Seals of Jeremiah’s Captors Discovered” are from the First Temple period, from approximately 1000 b.c.—about when David started his reign—to 585 b.c., when the Babylonians destroyed Jerusalem.

King David’s Jerusalem was only about 40 acres and sat on top of a hillside surrounded by valleys to the east, west and south. David built his palace north of the city, extending the city walls around it. After his 40-year reign ended, his son, Solomon, ruled for another four decades, enlarging the city northward and constructing the first temple. The temple was priceless in a religious sense and virtually so in a physical sense. The Bible records that 100,000 talents of gold were applied to the building’s interiors. Today, that gold—just one of many fine materials in the temple—would be worth $300 billion.

Three years after Solomon’s reign, the kingdom split into a larger northern kingdom (Israel) and a southern kingdom (Judah), consisting of the tribes of Judah, Benjamin and Levi. The 10 tribes in the northern kingdom set up their own capital, Samaria, and rejected Jerusalem, the house of David, and the worship of the true God.

About 200 years later, God allowed the empire of Assyria to invade the paganized northern kingdom and take the Israelites captive.

In the southern kingdom, King Hezekiah knew the Assyrian forces would continue their incursion into Judah and Jerusalem. He made several preparations, including digging a tunnel from inside the city walls to the Gihon Spring, Jerusalem’s only reliable natural water source (article, page 33).

King Hezekiah also prepared Judah by other means, using supplies you can see in person at our first exhibit case.

There were four cities in the southern kingdom aside from Jerusalem. King Hezekiah supplied these cities by vessels that could contain food, drink, olive oil and other goods. These vessels were stamped with what we now call a “lamelech” seal.

In order to prepare for the pending siege of Judah’s cities, Hezekiah gathered vessels containing foodstuffs at four distribution cities within the kingdom.

These vessels were stamped with a lamelech seal. In Hebrew, lmlk means “belonging to the king.” These inscriptions included a two- or four-winged beetle and the name of one of the four distribution cities, serving as a sort of postal address in Hezekiah’s system for supplying these cities ahead of the Assyrian siege.

The lamelech seals sit in the display cabinet next to other artifacts that are more common to the period. Some of these items, however, were uncovered just outside a window to King David’s palace. So although these artifacts were household items, they probably belonged to the royal household or to the servants of the palace. The items include a plate, a bowl and dipper juglets. Ancient residents of Jerusalem used the juglets to extract contents from inside larger vessels. They were often used for more expensive substances, such as ointments or perfumes.

Daily (and Royal) Life in Jerusalem

The next display contains a large storage vessel, called a pithos. It is the largest vessel of its kind ever found in Jerusalem. It was one of 12 pithoi found burned and crushed. One of these vessels bore a partial inscription: “belonging to the minister of the o ….” The context indicates this may well have read ophim, Hebrew for bakery. This wasn’t just any bakery; it was part of the royal administration. Another pithos bore a stamp with a date tree on it. This might have been used to store date syrup, which is used in baking.

We then come to the stars of the exhibit: the bullae. Each bulla is a ceramic impression created by the personal seal of a Judean noble to authenticate his documents. These particular seals symbolize a significant and somber history, however: They were used by two princes who fought against the message of the Prophet Jeremiah prior to the cataclysmic destruction of Jerusalem in 585 b.c. (article, page 14).

The next display case includes ominous artifacts that are directly related to that destruction: the heads of idols. These idols were fertility goddesses that Jerusalemites worshiped. These idols were found right inside the palace and nearby, quite close to the bullae. The proximity of these government artifacts to these pagan goddesses paints a picture of what was happening in Judah during this period—and why God punished this sinful city.

Also in this cabinet are a handful of bowls and oil lamps from the same time period. Lamps are always interesting, because their styles change with time. Lamps from today are different from 10 or 100 years ago—or 3,000 years ago, as you can see here.

Herbert W. Armstrong College students helped find a 150-foot tunnel beneath David’s palace apparently last used during the First Temple period (article, page 12). When we first entered that tunnel, there were a few of these oil lamps still sitting on the floor. This was an “Indiana Jones” moment for us, since this wasn’t a museum set up to mimic an ancient tunnel: This was the real thing, frozen in time.

The Destruction of Jerusalem

Armstrong College students also helped Dr. Mazar excavate a small square along the ancient eastern city wall, where dozens of arrowheads made of bronze and iron from the time of the Babylonian destruction were found. These recall a horrific time in Jerusalem’s history, when Babylonian soldiers armed with these weapons killed Judah’s defenders and overran the city in 585 b.c. King Nebuchadnezzar ordered his soldiers to slaughter the sons of Judah’s king before his eyes. Then they gouged out King Zedekiah’s eyes and hauled him in chains to Babylon, took the people of Judah captive, and left behind a devastated city.

The Prophet Jeremiah had warned the royals of Judah and the citizens of Jerusalem that their idolatry and sinfulness would lead to this fate. Near this point in this exhibit is a photograph of a cistern in Jerusalem. This could have been the pit that Judah’s princes threw Jeremiah in, leaving him to die in the mire in the midst of a siege. Jeremiah 38:6 says the prophet was cast into a dungeon “in the court of the prison.” This First Temple period cistern, with its plastered walls, appears to be the one most proximate to where the “court of the prison” would have been. “[A]nd in the dungeon there was no water, but mire, so Jeremiah sunk in the mire.”

But the Story Continues …

However, Jeremiah did not die in the dungeon. Jeremiah 38, 39 and 43 record that he was saved by Ebedmelech, the servant of King Zedekiah. He remained imprisoned until the day Jerusalem fell. After Babylonian forces took control of the city and its captives, King Nebuchadnezzar ordered his commander to “take [Jeremiah], and look well to him, and do him no harm; but do unto him even as he shall say unto thee” (Jeremiah 39:12). The Babylonians released Jeremiah, supplied with food, money and authorization to travel wherever he and his small entourage wished.

This is perhaps the most intriguing part of the exhibit. Jeremiah’s life—and his mission—did not end here. So where did he go? The prophet went to Mizpah, where he met some important Jewish survivors: the daughters of King Zedekiah—descendants of King David. Against Jeremiah’s instructions, he and his party were taken along with some other Jewish survivors south to Egypt, where many of them were killed. Jeremiah’s band escaped back to Judah.

Historical records show that Jeremiah journeyed across the Mediterranean Sea to Spain and eventually all the way to Ireland. Among the Irish annals of history, it is recorded that in 569 b.c. (only 14 years after Jerusalem’s destruction), “A wise holy man from the East came to [Ireland] bringing with him his scribe, also a beautiful princess, daughter of a king.” Ancient records also show that Jeremiah brought to Ireland a harp, an ark, and a stone called lia-fail, or the “stone of destiny.” This stone can still be seen in Edinburgh Castle in Scotland today. These things all have one factor in common: They represent the continuation of the throne of David!