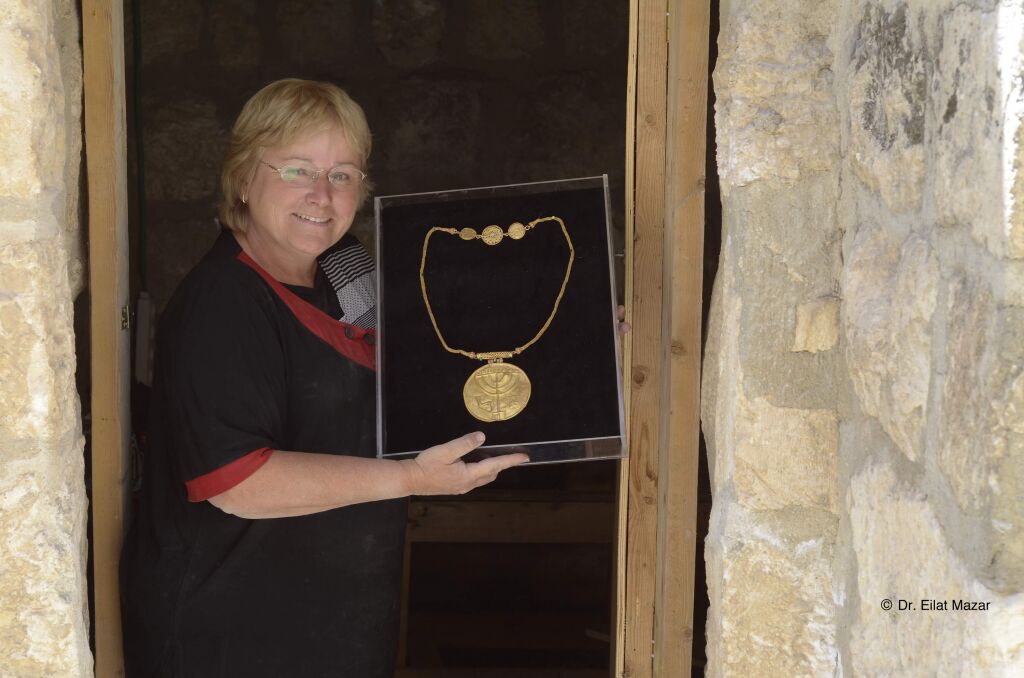 Why these 1,400-year-old treasures are important and her contributions to the field of Jerusalem archaeology

Just days before she announced her latest major discovery at a September 9 press conference, the Trumpet spoke to Dr. Mazar about why these 1,400-year-old treasures are important and her contributions to the field of Jerusalem archaeology.

What were some of the thoughts that ran through your head when you first uncovered the menorah medallion?

It truly was amazing. … And then first thing, I remember, What is this doing here, what is that? And the second was, What am I going to do with this gold? It causes trouble. … I immediately started to worry about it.

In your book you theorize that the menorah medallion and other items with it were used as Torah scroll decorations. What led you to this conclusion?

Well, it’s obvious that it’s meant to hang on something. And I believe that there are only two options: It’s meant to hang on somebody, as a decoration, like a priest or somebody who is the head of the synagogue or the one praying with the Torah. It has to be connected to Judaism, of course, because of the seven-candled menorah. The other option was maybe it’s meant to decorate the Torah book. … When we found out that the other symbol [on the medallion] was a Torah book on the other side of the menorah, that option made more sense. It’s not usual, it’s not so common, to see such a symbol beside the menorah.

What was the purpose of the gold coins and other items discovered in the second bundle?

That’s what was amazing about this. We kind of expected at least one, two, some of the coins (we have, altogether, 36 coins)—so we expected some of the gold coins to be in the first purse. But it seems like they were meant to be separated. … And that all brings us to believe that the other purse was meant to be used, not for ornamentation of the Torah scroll, but to be used as money.

I believe that they were messengers and that they were sent for a specific commission. And they were given the money in order to probably build a synagogue. So that money was meant to be used for that purpose.

Of course, these are assumptions. … [T]hat’s what I think now, but we still give ourselves the option to go on more deeply into these types and study more, to see how more accurately we can come to further conclude it.

What significance do you think these finds will have on the world of archaeology and in regard to the history of the Jewish people?

Well, you know, everybody wants to find gold. But it’s not what archaeology is all about. Usually archaeology is very hard work … it’s pottery, it’s walls, stones—nothing like gold.

So, once in a while to find such a treasure, this is great, but I wouldn’t recommend it as if it happened on a regular basis. …

[S]uch a small treasure, relatively small, contains so much information, and it teaches so much. In this case, we can relate it to Jewish people very clearly. There is no doubt. We can relate it to a specific time—there is no doubt about that because the coins are telling us about the specific time …. And the location is very clear, so near the Temple Mount. So we got enough information to base a very good theory, and relate it to a specific time—which, we know what became of the Jewish people at that time: They were eager to come and build Jerusalem.

What would you say is your most remarkable find to date?

I don’t think that it’s one item, unless it’s this medallion. The menorah—of course, it’s amazing. But when it comes to the importance of what we did in Jerusalem, archaeological projects that I conducted, I believe it’s the whole thing: the buildings, monumental structures from the time of King David and Solomon. Structures that existed up to the end of the First Temple period—I believe that this is the most important contribution. I’m very proud of that.