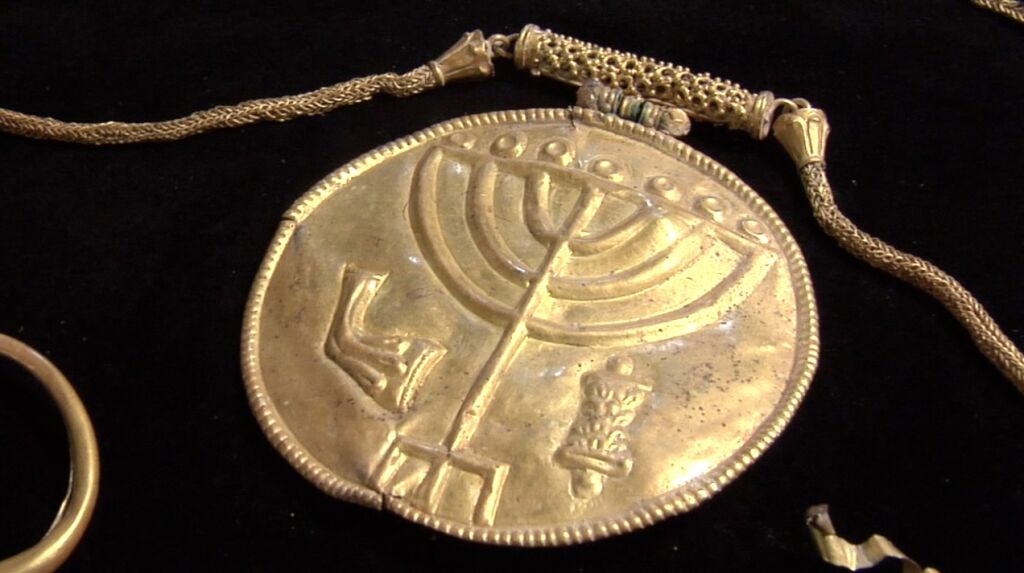 Gold treasure with Jewish menorah found near the Temple Mount

Archaeological digs on the Ophel have occurred on and off since the middle of the 19th century. But only in recent years have royal structures been uncovered in Jerusalem that closely correlate to the biblical descriptions of King Solomon’s massive building projects in the books of Kings and Chronicles.

In the most recent phase of the Hebrew University of Jerusalem Ophel excavations, this past summer, Eilat Mazar and her team set out to uncover more remains from the Solomonic period—and they did. But no one expected the most stunning discovery of all to come in the first week of the dig, after excavators had barely broken through the surface of a new area.

There, just a few centimeters beneath modern debris, they began to expose a hoard of rare gold coins, silver and gold jewelry. And among these treasures was a real archaeological gem: a large gold medallion ornamented with a menorah, the iconic Jewish symbol of a seven-branched candlestick.

“This happens only once in a lifetime,” said Dr. Mazar.

This fantastic collection was discovered just 50 meters south of the Temple Mount, inside a Byzantine structure that dates back to the sixth century c.e. It had most likely been carefully packed and hidden by a prominent group of Jews during the Persian conquest of Jerusalem at the beginning of the seventh century.

Just like the massive stones King Solomon used to build his royal complex, this newly discovered treasure, after being buried for 14 centuries, revives a riveting and powerful testimony from a long-forgotten chapter in the 3,000-year-old history of Jewish Jerusalem.

This is the latest of a series of extraordinary finds Dr. Mazar has unearthed in recent years. Working on behalf of Hebrew University in Jerusalem, she has been uncovering Jerusalem’s history for decades. In 2009, she renewed work in the Ophel, at the foot of the Temple Mount, which she had once excavated with her grandfather, Prof. Benjamin Mazar, in the 1970s. A second phase of excavation in 2012 yielded her most recent remarkable find: a piece of pottery bearing the oldest alphabetical inscription yet to be found in Jerusalem.

This past April, Dr. Mazar and her staff went back into the field to continue the second phase of the renewed Ophel excavations. Just five days in, workers Caridad French and Ahinoam Meyers were excavating in a Byzantine-era structure when they uncovered a large gold earring. The find was particularly startling because of its proximity to modern debris. As they continued, the second earring appeared, and then a number of gold coins began emerging, strewn across the area.

Further excavation carried out by the team, including Dr. Mazar herself, revealed the menorah medallion buried in a depression in the floor and a cache of jewelry items tucked underneath it. Remnants of fabric found on the items indicate that they were at one time packaged in two separate cloth purses.

The first bundle, containing the menorah medallion and other jewelry, was found undisturbed where it had been carefully hidden in the chalky floor. The second had a more dramatic fate. Its items were found scattered across the floor; apparently there had not been enough time to bury them.

Dr. Mazar and her team believe the menorah medallion, which hangs from a gold chain, and the other jewelry items found with it were probably used to adorn a Torah scroll—a practice that Jews have been known to do for millennia. If so, the medallion and accompanying items would be the earliest known Torah scroll ornaments ever discovered. This appears to be corroborated by the appearance of the Torah symbol on the medallion itself. A similar medallion displaying a Torah scroll alongside a menorah can be found on display in the Jewish Museum in London, though its origins are unknown.

The second bundle held 36 gold coins, two gold earrings, a broken gold-plated silver pendant and a pure silver ingot—probably all items that a Jewish resident of the city had intended to use as payment.

Numismatics expert Lior Sandberg, who examined the coins, concludes that the last possible date for their minting is 602 c.e. Therefore, the gold coins and their accompanying items must have been abandoned sometime after this date. Dr. Mazar postulates that the treasure was abandoned around the time of the Persian conquest of Jerusalem in 614 c.e.

Why Was It Left Behind?

Historical circumstances give us clues as to why such a treasure would have been left in Jerusalem.

After the city fell under Persian control, Jews flocked to Jerusalem, intent on returning and rebuilding their homeland. However, history recounts that as the Persians’ power waned, so did their support for the Jewish population. To appease the rising power of Christendom, the Persians betrayed the Jews and expelled them from Jerusalem.

Sandburg wrote, “The cache was abandoned after 602 c.e., most probably after the Persian conquest of Jerusalem and after the Persians changed their attitude to the Jews and allowed their expulsion from the city. The fact that the gold was not properly hidden nor taken back attests to the tragic circumstances that led to its abandonment.”

In her new book, The Discovery of the Menorah Treasure at the Foot of the Temple Mount, Dr. Mazar theorizes that the collection of Torah scroll adornments and the purse containing coins and other means of payment accompanied a group of prominent Jews sent as representatives from their community to build a synagogue in Jerusalem.

“It is not inconceivable that it was earmarked as a contribution toward the rebuilding of the temple itself. This we cannot know,” she wrote. “What is certain is that their mission, whatever it was, was unsuccessful. The treasure was abandoned, and its owners could never return to collect it.”

This past summer, Herbert W. Armstrong College sent 13 students and two alumni to participate in this latest phase of Dr. Mazar’s dig. The students arrived on site in May and stayed through August. The group made up about a third of Dr. Mazar’s workforce.

Armstrong College students have participated in Dr. Mazar’s excavations since 2006, laboring on the dig site and helping to document and process the finds.

When Dr. Mazar found herself with the unusual problem of having too much gold on her hands, she turned to the college to assist her in discreetly preparing to publish her initial research on the items. “Gold attracts attention,” she told the Trumpet. Not wanting to risk disrupting the excavation that had only just begun, and desiring to research further into the items, she chose to wait a few months before publicizing the finds.

Armstrong College students and Trumpet staff helped Dr. Mazar prepare a 17-minute film (recorded in both Hebrew and English) detailing the significance of the Ophel treasure. They also assisted in creating her press release and promotional videos in preparation for the public announcement of the discovery, as well as the English translation of The Discovery of the Menorah Treasure at the Foot of the Temple Mount.

“She described the project as one that should shake the world with excitement, but before then, everything would have to be done in secret,” said Armstrong College senior Jessie Hester, who flew to Jerusalem in early June to tape the project. “Then we went to work on it.”

Finally, on September 9, Dr. Mazar called a press conference and announced it to the world.