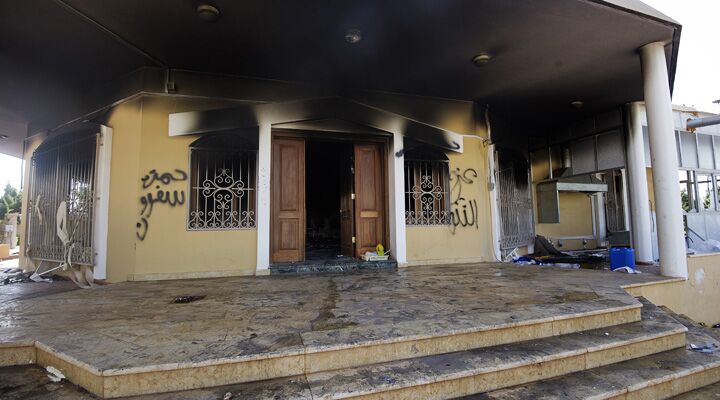 There is clear evidence that al Qaeda and Iran are working together, despite the war in Syria.

Was Iran involved in the attack on the American Consulate in Benghazi on Sept. 11, 2012? Too many would dismiss that question with a simple “no.” Benghazi was al Qaeda. It’s Sunni. They hate the Shiites in Iran.

The war in Syria seems to confirm this view. Al Qaeda sends its men and resources to support the rebels while Iran and Hezbollah prop up Syrian President Bashar Assad.

But the truth is that the al Qaeda-Iranian relationship is much more complicated.

The Sunni-Shia divide is real and significant. But Iran and al Qaeda’s hatred for the West is even more powerful. Iran and al Qaeda have fallen out in the past. But they also have a proven record of working together.

Furthermore, al Qaeda is not a unified bloc, but rather a loose coalition of militants fighting under the same brand name. A local commander in North Africa doesn’t care who Iran’s fighting in Syria, providing he gets the weapons he wants.

Not only is it possible for Iran and al Qaeda to work together, but there is solid proof that it is happening right now, and even Benghazi is drawn into that relationship.

Reports from the U.S. Treasury Department expose a partnership between the two. In the summer of 2011, it announced that the United States had uncovered an al Qaeda network operating in Iran under an agreement between al Qaeda and the Iranian government. “Iran is a critical transit point for funding to support al Qaeda’s activities in Afghanistan and Pakistan,” it wrote.

“Al Qaeda’s core financial pipeline—which runs from Kuwait and Qatar, through Iran, to Pakistan—depends upon an agreement between al Qaeda and the Iranian government to allow this network to operate within its borders,” wrote Under Secretary for Terrorism and Financial Intelligence David S. Cohen, in written testimony in October 2011 (emphasis added throughout).

The next February, the Treasury reported that Iran’s Ministry of Intelligence and Security “has facilitated the movement of al Qaeda operatives in Iran and provided them with documents, identification cards, and passports.” It said it had “also provided money and weapons to al Qaeda in Iraq (aqi) … and negotiated prisoner releases of aqi operatives.”

Then again in October 2012, Cohen unveiled new material that, he said, highlighted “Iran’s ongoing complicity in this network’s operation.” At this point, the Syrian conflict was well under way. Yet Iran and al Qaeda were still working together.

“Under the terms of the agreement between al Qaeda and Iran, al Qaeda must refrain from conducting any operations within Iranian territory and recruiting operatives inside Iran while keeping Iranian authorities informed of their activities,” wrote the Treasury Department. “In return, the government of Iran gave the Iran-based al Qaeda network freedom of operation and uninhibited ability to travel for extremists and their families.”

And Benghazi? These kind of links can often take years to fully uncover. Last November, a Washington District Court heard that Iran trained the al Qaeda operatives responsible for the 1998 embassy bombings in Kenya. Dr. Matthew Levit, an expert witness for the case on the state sponsorship of terrorism, said that “it would not have been possible for al Qaeda to a reasonable degree of certainty to have executed this type of a bombing attack, which it had never previously executed, without this type of training it received from Iran and Hezbollah.”

It took 13 years for Iran’s involvement in the Kenya bombings to become public. It may take time before all the facts are known, but already there’s some good evidence that Iran had a hand in the Benghazi attack.

In May, Egypt arrested three militants armed with 22 pounds of explosives and bomb-making equipment. Egypt’s Interior Minister Mohamed Ibrahim told journalists that the group had received instructions from an al Qaeda leader called Dawoud al-Asadi. According to Rewards for Justice, a website set up by the U.S. State Department, Dawoud al-Asadi is an alias for Muhsin al-Fadhli—the leader of al Qaeda in Iran. To cement the connection even further, Ibrahim said that one of the three terrorists had received military training in Iran.

Ibrahim said that Al-Asadi (aka al Fadhi) told the terrorists to get in touch with a group known as “the Nasr City Cell”—an Egyptian-based group that has since been rounded up, but has strong connections to al Qaeda and has been linked to the Benghazi attack. The cell’s leader, Muhammad Jamal al Kashef (aka Abu Ahmed) set up training camps in Libya and Egypt, founding the Jamal terrorist group. U.S. intelligence officials identified members of his network on the scene of the Benghazi attack.

In short, al Qaeda in Iran trained a terrorist agent, sent him to Egypt with two other operatives, and told him to get in contact with some of the key instigators of the Benghazi attack.

Al Qaeda in Iran was working with some of the planners of the Benghazi attack.

Under its agreement with Iran, al Qaeda also had to keep the Iranian government up to date with its activities.

“Egypt is rapidly moving into the Iranian camp,” wrote Trumpet editor in chief Gerald Flurry in August 2011. “That means Egypt, which borders Libya, will now help bring that nation into Iran’s terror network.”

Now we see evidence that Iran is spreading its terror network in Libya, via Egyptian terrorists—men who were locked up by former President Hosni Mubarak, but were freed in the revolution.

Did Iran merely know about the attack, or was it a key part in it? Just like the attack on the embassies in Kenya, the proof might not come out for another decade.

But in another part of Africa, there is, almost literally, a smoking gun. In September 2011, the Nigerien military captured weapons and ammunition from al Qaeda in the Islamic Maghreb (aqim). It included ammunition that Conflict Arms Research identified as originating in Iran. Then in May 2012, it also intercepted a shipment of weapons containing Iranian-manufactured ammunition.

Also, in Somalia, Al Shabaab has strong links to Iran, and is also affiliated with al Qaeda.

Iran’s patronage of Al Shabaab’s predecessor, the Islamic Courts Union (icu), is clear. The United Nations monitoring group in Somalia discovered that Iran had flown it an aircraft full of weapons, including surface-to-air missiles, machine guns and grenade launchers, in July 2006. It also reported on arms from Iran sent by sea.

Around the same time, the icu sent 720 of its best fighters to Lebanon, to fight alongside Hezbollah. Some of the fighters stayed in Lebanon after the fighting for advanced training. “In exchange for the contribution of the Somali military force, Hezbollah arranged for additional support to be given to icu from the governments of Iran and Syria, which was subsequently provided,” said the report.

Since then, the icu has changed its name to Al Shabaab, and become the official Somalia wing of al Qaeda. But Iran’s support has continued. In July, the UN monitors mention hundreds of illegal fishing vessels—mainly Iranian and Yemeni owned—that visited the waters around Somalia. They say that they “had received several unconfirmed reports that some of the illegal fishing vessels are also being used as cover for weapons smuggling.”

“While the Monitoring Group has been unable to verify any particular vessel that has been used for both illegal fishing and weapons smuggling, it has nonetheless established other connections between the illegal fishing networks and networks involved in the arms trade and connected to Al-Shabaab in northeastern Somalia,” they write.

They also reported that they have captured several “nearly new” Rocket Propelled Grenade (rpg) launchers that “closely resemble Iranian-manufactured” launchers. The monitors are also investigating a ship seized in January in Yemen. It was packed with weapons and fuel, and the UN believes that some that could have been bound for Somalia.

On their own, each of these incidents of cooperation between al Qaeda and Iran would be interesting, though not conclusive. Together they paint a pattern of broad cooperation across Africa and the Middle East.

The two sides also share the same goals in the region. A recent study by rand corporation by analyst Seth Jones concluded that al Qaeda groups “want to establish Islamic emirates in specific countries or regions, though they may be agnostic about a broader violent jihad.” That suits Iran, who wants to push against Europe across north Africa. Jones notes that Algeria, for example, is one of the main targets of al Qaeda in the Islamic Maghreb. Iran too would be keen to see an Islamic regime take over one of Europe’s key resource hubs. “France, rather than the United States, is the most significant foreign enemy,” notes Jones.

Hezbollah and al Qaeda are undoubtedly the two most powerful terrorist groups in the world. By working together with Iran’s support, they have nation-destroying potential.

The Trumpet has long forecast that Iran would become a major power in northern Africa—specifically that it would get control of Egypt, Libya and Ethiopia. Its links with terrorist groups in the area are a major step in that direction. These terrorist groups may be Sunni, but they are still influenced by Iran and supported by Iran.

Mr. Flurry identified Iran as the “king of the south,” or the leader of Islamic terrorism, in the early ’90s. Since then it’s retained that top spot. For more information on the significance of Iran’s terror network, read our free booklet The King of the South.