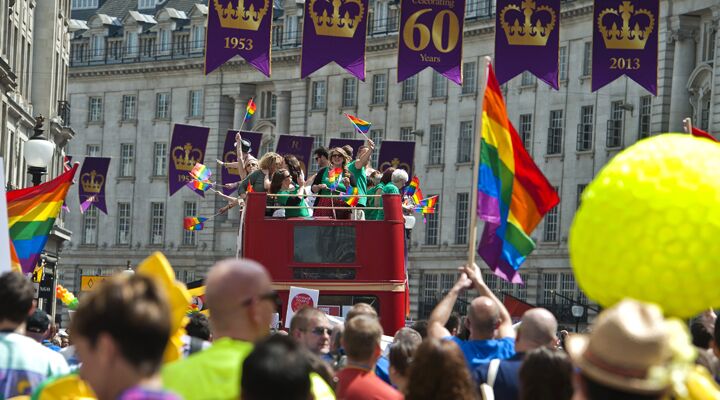 Take a look at Thursday’s front pages from Britain’s newspapers (you can see them here). The big news of the day? A golf club might allow women to join. The Queen wants her great-grandchild to arrive before she goes on holiday. Someone has won the final of the UK’s business reality tv show The Apprentice. And perhaps the most discussed subject: Summer is hot.

Some have more substantial news as well—the prospect of war in Syria, for example. But here’s one thing that you’d never know glancing at those pages—that the day before the Queen gave her assent to the “Marriage (Same-Sex Couples) Bill,” meaning that it has now become law in England and Wales. Same-sex “marriages” will probably take place before summer next year.

To be fair, it did generate a lot of media coverage on its way to being passed into law. And it was no surprise that the Queen approved it—all of the big obstacles in its way had been cleared months ago. But this was still a huge change to the family unit—the major building block of the nation. But, browsing the news, you’d never know, unless you looked really hard.

The truth is, Britain isn’t really that interested in homosexual “marriage.” As America’s Supreme Court deliberated on same-sex “marriage,” thousands turned out to protest. As France legalized it, hundreds of thousands took to the streets. In Britain, it was just hundreds.

“The French like to make fun of the British, joking about their repressed ways in matters of the heart,” wrote the Associated Press. “But when it came time to debate same-sex marriage, it was France that betrayed a deep conservative streak in sometimes violent protests—while the British showed themselves to be modern and tolerant”—as the Associated Press sees it of course.

The push toward same-sex “marriage” came from Britain’s Conservative government—not from a left-wing party. It easily sailed through Britain’s House of Commons with the support of all the major parties—though most Conservative M.P.s went against their party leadership and opposed the bill.

It passed through the Lords easily.

There was little real opposition to the bill, because no one really cared. In fact, this was one of the most common arguments used against homosexual “marriage”—no one really cares much either way, so instead of making this law, why don’t we do more to help the economy.

It shows that family is not a big deal in Britain. Children are. Politicians stir up a lot of emotion when they fiddle with child care and education. But fiddle with family? No one really minds. It is schools and day-care centers that bring up children.

In France, it’s different. It wasn’t homosexual “marriage” per se that stirred up all the protests, it was the fact that homosexual couples would be able to adopt and rear children. In France, family is more central to society.

Not so in Britain. Single, married, cohabiting—it’s a lifestyle choice, like what kind of car you buy, what area of the country you live in, or what color you paint your walls. If the government wants to let people have polka dot wallpaper, who cares? The same goes for marriage.

But marriage and family is vitally important—to individuals, children, and to the whole nation. The Trumpet has a new booklet coming out soon called Redefining Family that explains why homosexuality is wrong. Until then, to learn more about why marriage is so vital, read our free booklet Why Marriage—Soon Obsolete?