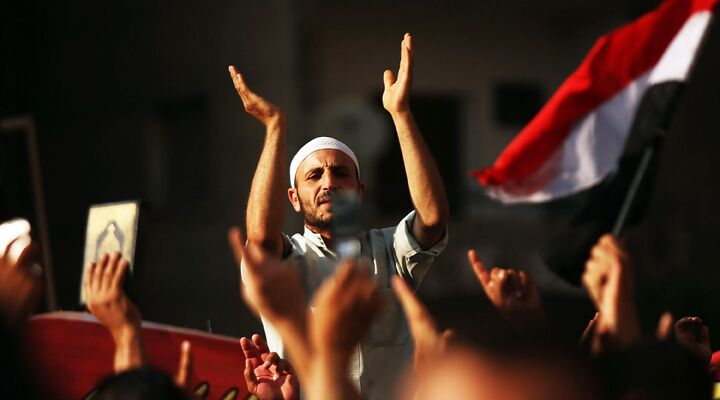 The declaration serves as an interim constitution until a new document can be drawn up and ratified in a referendum.

The Islamic character of this declaration is obvious right from Article 1, which states (emphasis added throughout):

The Arab Republic of Egypt is a state whose system is democratic, based on the principle of citizenship; Islam is the religion of the state; Arabic is its official language; and the principles of Islamic sharia—which include its general evidences, its fundamental and jurisprudential rules, and its recognized sources in the doctrines of the people of the Sunna and Jam’aa (i.e., Sunnism)—are the main source of legislation.

The old constitution expressed similar sentiments. The Catholic Fides news agency describes the importance of the last part of the article, saying that it “adds that the interpretation of the sharia law should be in accordance with the body of laws developed in the early centuries of Islam.”

Article 3 of Egypt’s old constitution guaranteed Christians and Jews the right to use their own religious laws as the “main source” in regulating their religious affairs and the selection of their religious leaders as well as their “personal status.” That protection is gone from the new declaration.

Christian leaders have condemned the new constitution, as have the liberal political groups that spearheaded Morsi’s removal. Tamarod, the alliance of parties that called for the demonstrations that led to Morsi’s downfall, has been criticized for opening the door to radical interpretations of Islamic law and laying the foundation for a dictatorship.

The constitution is further proof of the power that the Salafist al-Nour party wields in the new government.

“They essentially have veto power over the coalition,” the director of research at the Brookings Doha center, Shadi Hamid, is quoted as saying by the Guardian. “The new government needs al-Nour, as they need to be able to point to at least one Islamist party on their side. If they lose al-Nour, they will have thousands of al-Nour party supporters joining the Brotherhood in the streets.”

Regardless of al-Nour’s involvement, most Egyptians support a radical Islamic constitution. Former Egyptian President Hosni Mubarak held radicalism in check only through brute force. Democracy automatically puts Egypt on the path to becoming an Islamist state.