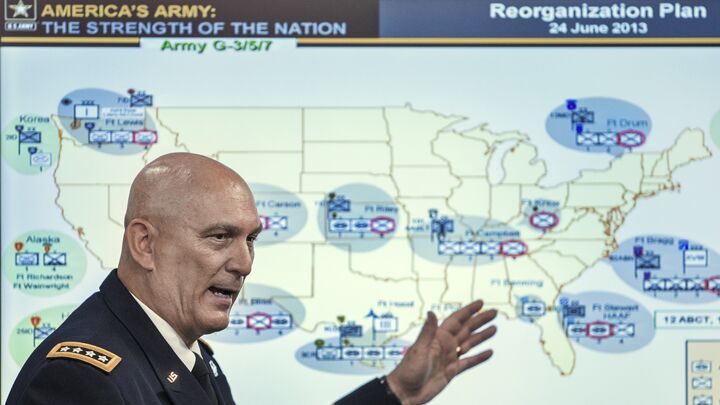 Budget cuts are downsizing the Army, Air Force and Navy.

Bloodied from more than a decade of constant fighting, the U.S. military is taking fire from another enemy: the sequester. These mandatory budget cuts are slashing billions of dollars from the military’s budget, reducing America’s military readiness around the world and hampering its ability to be a global superpower. Of the $109 billion that needs to be cut each year of the sequester, $54.5 billion are defense cuts.

The latest casualty of the sequester is the Army. Last Tuesday, the Army announced it would cut the number of combat brigades from 45 to 33 by 2017 to meet budget cutting goals. Army officials said one brigade would be cut from 10 bases across the U.S, along with two brigades in Germany that were already scheduled to be completely disbanded.

These cuts are part of the Army’s long-term plan of cutting its force size by 80,000 soldiers. With the drawdown in Afghanistan, the Army is working to reduce the number of active troops to reflect peace-time conditions. However, the plan is not to completely axe the 12 brigades, but to simply reorganize them. The headquarters units of these brigades will be cut, but many of their subunits will be taken and integrated into other combat brigades. As Breaking Defense puts it, “In short, the service is proportionately getting rid of more support troops than combat troops, more staff officers than tank gunners or infantry grunts, more chiefs than Indians.”

With this round of cuts, the Army is essentially trimming the fat of its forces: The 80,000 troops to be cut are largely from support or administrative units. The combat units of the Army will be largely unaffected. But if Congress does not act to stop automatic budget cuts from taking effect next year, the Army warned that upward of another 100,000 soldiers could be cut either from active duty, the National Guard or Army Reserve. That round of budget constraints would cut deep into the muscle of the Army.

The Navy is also preparing to downsize. Currently, the Navy faces a shortfall of $9 billion in 2014, but if lawmakers do not remove the sequestration cuts, it could grow to $23 billion. Chief of Naval Operations Adm. Jonathan Greenert said the cuts would potentially trim the Navy’s fleet of warships from just over 280 to around 250, the lowest since before World War i. In the Navy’s recent shipbuilding plan submitted to Congress, the Navy stated that its 30-year plan “does not include enough ships to fully support all elements of the Navy’s 306-ship goal over the long run.” Without a strong, influential Navy, America, isolated from the rest of the world, would be unable to project its power globally.

And then there’s the Air Force, which is getting its wings clipped as well. Air Force Chief of Staff Gen. Mark Welsh told reporters last week that the Air Force had grounded 33 squadrons so far. Another seven squadrons have been reduced to just doing basic “takeoff and landing” training. An article from the Lexington Institute estimated that “without firing a shot, sequestration has already inflicted ‘losses’ on the U.S. Air Force alone on the order of 300 aircraft. If one includes the additional squadrons placed in a similar status by the Navy and Marine Corps, the total cost of sequestration in terms of ‘downed’ U.S. aircraft rises to something like 600. This bloodbath amounts to approximately 20 percent of the air combat capability of the U.S. military.”

Aside from reducing America’s security, these cuts wouldn’t help improve America’s budget as much as officials hope either. With America’s unemployment rate at 7.6 percent (and real unemployment much higher) and only a small number of jobs being created, these unemployed veterans will be hard-pressed to find work. If they can’t find jobs, they will have to turn to government assistance for help, putting more weight on the already overburdened welfare system. So the defense cuts simply pass some of the debt that would have been caused by military spending over to the welfare system instead.

But what is the cause of this? Some blame the economic policies: If the sequester had never passed, we wouldn’t have to downsize the military. Others blame the military: If America hadn’t gone to war in Iraq and Afghanistan, the economy would be healthier. But is there a more fundamental problem?

In his book The United States and Britain in Prophecy, Herbert W. Armstrong explained that “all the world’s problems and ills are simply a matter of cause and effect. There is a cause that has produced strife and war; poverty, wretchedness, inequality; crime, disease, mental ills.” America’s economic woes and the shrinking military are the effects of something. What is the cause?

As Mr. Armstrong went on to write, “The world’s leaders are the educated of the world. But they were not educated in basic truths—the foundations of right knowledge. The most necessary knowledge is not being taught!” This lack of basic truth is what is causing what we see in America today; it is a lack of knowledge about God and His Laws.

To understand these basic truths and the significance of the troubling times in America today, be sure to read The United States and Britain in Prophecy.