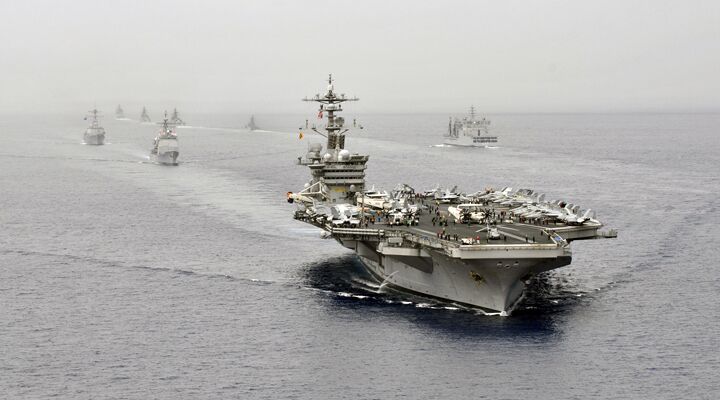 How the Navy is getting smaller in more ways than one

The U.S. Navy, under the constraints of budget cuts, is preparing to downsize its fleet yet again. Currently, the Navy faces a shortfall of $9 billion in 2014, but if lawmakers do not remove the sequestration cuts, the shortfall would grow to $23 billion. Chief of Naval Operations Adm. Jonathan Greenert said the cuts would potentially trim the Navy’s fleet of warships from just over 280 to around 250, the lowest since before World War i.

Despite the Navy’s attempts to be positive about the downsize, it admits that it is in a severely compromised position, and it appears things aren’t going to be changing anytime soon. Back in February, the Navy scaled back its projected fleet size from 313 ships to 306. This is the number of ships it feels that it needs to effectively continue defending America’s interests abroad and carry out the demands of the Pentagon’s current defense strategy. At the time this was announced, many voiced their concerns that this would reduce America’s ability to project its power around the world.

However, even this 306-ship goal is unattainable. In the Navy’s recent shipbuilding plan submitted to Congress, the Navy stated that its 30-year plan “does not include enough ships to fully support all elements of the Navy’s 306-ship goal over the long run. The Navy projects that the fleet would remain below 306 ships during most of the 30-year period, and experience shortfalls at various points in cruisers, destroyers, attack submarines and amphibious ships.”

Equally troubling is the fact that the Navy is not only shrinking in number of ships, but also the size of the ships. As the report said, it was the cruisers and destroyers—the support ships for America’s carrier groups—that would be most lacking. As RealClearDefense reported, “Not only is the fleet shrinking and aging, but it is also changing its composition by trading powerful combat ships before the end of their service lives for larger numbers of smaller and less capable ships. The latest interim plan will cause aggregate combat power to decline along with numbers, leaving the fleet less capable of dealing with open ocean submarine threats, enemy surface fleets, and the majority of threat aircraft and missiles.”

One of these smaller, less capable ships is the Navy’s new Littoral Combat Ship (lcs). The ship, touted as the new face of the Navy, has come under severe criticism. Though Navy Secretary Ray Mabus said lcs was “one of our very best programs,” some critics question how well it would hold out should it ever see combat. Michael Gilmore, the weapons tester, said in a January report that the ship “is not expected to be survivable in that it is not expected to maintain mission capability after taking a significant hit in a hostile combat environment.” The vessel has also been criticized for not having any substantial firepower, having design problems, and costing too much.

Budget cuts are putting the U.S. military in a precarious position. Without the necessary power, America’s ability to defend itself and its interests abroad becomes increasingly uncertain. Many are seeing where a downsized military is taking us. The Washington Free Beacon quoted Adm. William H. McRaven, the top commander of U.S. Special Operations forces, as saying, “‘With these cuts you won’t see it tomorrow or next year, you might not even see it in the next five years, but one day you’ll wake up’ and the U.S. military will be decimated.”

Since the sailing of the Great White Fleet in 1907, America’s Navy has been the iconic sign of its greatness. Britain’s military might was waning, and America’s turn in the sun had come. But today, America is following the same path Britain took. Just as economic woes hamstrung Britain’s Navy, they are doing the same to America’s Navy today. But as we wrote back in 2011,

Just as with Britain, though, America’s economic woes are not the cause of its problems. They are a symptom that points to the cause. They themselves have a far greater cause that must be understood. … America’s massive and growing problems—epic indebtedness, impossibly expensive entitlement programs, unwinnable nation-building-type military projects—all stem from the nation’s having turned its back on the Source of its prosperity and broken His immutable laws.

God, the great Giver of America’s wealth, is taking the wealth away because we have refused to keep His laws. Bible prophecy says America is not going to recover from its economic woes. We have passed the point of no return, and this means terrible times of suffering are fast approaching. But there is good news! All this signals that Jesus Christ is about to return to put an end to war and violence and bring peace and prosperity to all mankind. To understand more about America’s decline and where it is leading, request The United States and Britain in Prophecy and Lamentations: The Point of No Return.