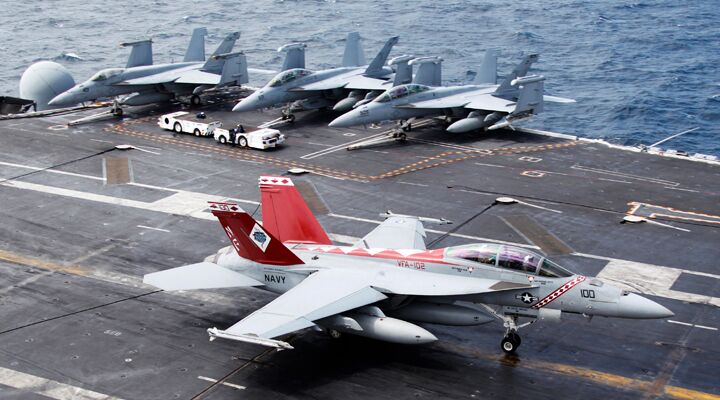 America’s security continues to be compromised.

China is once again accused of stealing from the United States. In what is probably the largest breach of American military secrets ever, the designs for more than two dozen major weapons systems—including the F/A-18 fighter jet, Black Hawk helicopter and a number of advanced missile systems—have been compromised, according to a confidential report obtained by the Washington Post from the Defense Science Board (dsb).

China’s involvement in attacking and stealing from American corporations came to light in February via a report released by Madiant, a cyber-security company. The report shows that over the past five years, members of the Chinese military have hacked more than 100 of Madiant’s clients. Many of the hacked companies are based in the U.S. Although the accused cyber unit, Unit 61398, went dormant after it was exposed, it is back at work.

American officials confirmed Madiant’s report, however, the U.S. has not taken a hard stand against China. The U.S Defense Department specifically named China as the culprit behind the attacks—for the first time—in its “Military and Security Developments Involving the People’s Republic of China 2013” report. However, it was not a strong stance—the report read that some of the continued attacks against U.S. government systems “appear to be attributable directly to the Chinese government and military” (emphasis added). The report also used vague language such as “potentially” and “could” to describe China’s actions. The U.S. is afraid to respond forcefully.

The thefts are not even big news anymore because China has been stealing from America for years.

On Tuesday, the day after the public was told of the hack, White House Press Secretary Jay Carney gave an informal briefing. Only one question was raised about the theft, to which Mr. Carney gave the typical We are aware of the issue and are looking into it response. Astoundingly, the reporters seemed satisfied with his response.

The Pentagon downplayed the report as “outdated and overstated.” The findings of the report were dated, according to one Defense Department spokesman, because much of the research was completed two years ago. “We maintain full confidence in our weapons platforms. Suggestions that cyber intrusions have somehow led to the erosion of our capabilities or technological edge are incorrect,” said Pentagon spokesman George Little.

If the report is dated, that may be even worse, because that means China has had two years to study the plans. “If they [the Chinese] got into the combat systems, it enables them to understand it to be able to jam it or otherwise disable it,” said the director of the Straus Military Reform Project at the Project on Government Oversight, Winslow T. Wheeler. “If they’ve got into the basic algorithms for the missile and how they behave, somebody better get out a clean piece of paper and start to design all over again.”

If China has the ability to gain access to highly confidential and protected weapons designs, what else can it access? What if China, or another nation, was able to hack America’s networks during a time of conflict? The public version of the dsb’s report paints a chilling picture of the consequences of compromised security systems.

According to the report, the U.S. military is “critically dependent on networks and information systems.” A cyberattack would cripple the military, including “degradation or severing of communication links critical to the operation of U.S. forces, thereby denying the receipt of command directions and sensor data; data manipulation or corruption may cause misdirected U.S. operations and lead to lack of trust of all information; weapons and weapon systems may fail to operate as intended, to include operating in ways harmful to U.S. forces; potential destruction of U.S. systems (e.g. crashing a plane, satellite, unmanned aerial vehicles, etc.).”

The report suggests a cyberattack could be waged against more than just the U.S. military: “At the national level, one could posit a large-scale attack on the U.S. critical infrastructure (e.g., power, water or financial systems). An attack of sufficient size could impose gradual wide-scale loss of life and control of the country and produce existential consequences.” This may seem inconceivable, but it is actually the reality America faces today. Notice the conclusion the report came to: “Given the severe consequences of the threat, the issue now is how to mitigate it ….”

Since 1995, Trumpet editor in chief Gerald Flurry has warned that reliance on technology would be America’s “Achilles’ heel.” In the January 1995 Trumpet issue, he wrote,

Now let’s look at an alarming scripture: “They have blown the trumpet, even to make all ready; but none goeth to the battle: for my wrath is upon all the multitude thereof” (Ezekiel 7:14). The trumpet of war was blown in Israel—mainly America and Britain. It seems everybody was expecting our people to go into battle. But the greatest tragedy imaginable occurred! Nobody went to battle—even though the trumpet was blown! Will it be because of a computer terrorist?

For more than 15 years, the Trumpet has warned of the strong possibility that a major cyberattack could cripple America. Many now see that same possibility. China’s continued theft of American trade and military secrets exposes America’s cyber weakness. However, China likely will not deliver the knockout punch. Such a crippling attack will most likely come from Germany and the soon-coming United States of Europe.

We are entering the biblically-titled period of the “times of the Gentiles.” American domination in world affairs is over. Britain’s heyday ended years ago. We see a world increasingly dominated by non-Anglo-Saxon nations. Bible prophecy reveals this will lead to another world war. But it does mean that we are one step closer to Jesus Christ’s return. For more information, read Russia and China in Prophecy.