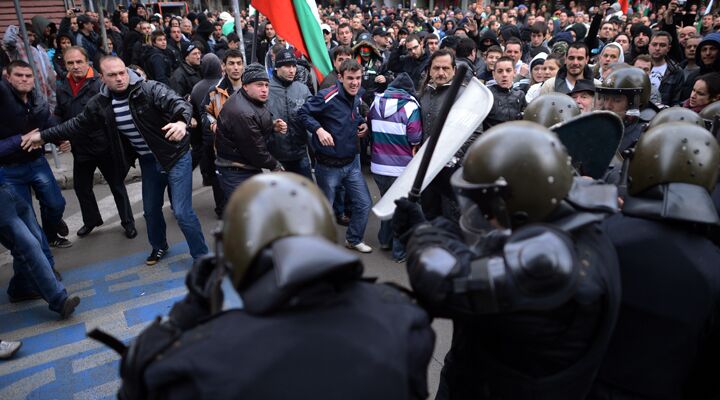 Across Europe, the people are protesting. But they’re not fed up with a particular party or person. They’re rallying against the whole political system.

Between 100,000 and 200,000 people turned out to protest in Bulgaria last Sunday. That’s a lot of people for a small country—around 2 percent of the whole population. “Bulgarians rarely overcome their apathy to go out on the streets,” notes the EU Observer. “They don’t usually believe they can make a difference by protesting.”

What prompted them to turn out this time? The government had already stepped down a few days earlier. They were protesting against no one.

On the same day, in Italy, a comedian-turned-blogger-turned-politician emerged as one of the few successful figures in its parliamentary election. Beppe Grillo’s party, the Five Star Movement, was the most successful political party—all the other leaders were at the head of coalitions.

Why did a movement that started from nowhere end up receiving the approval of one quarter of Italy’s voters? For exactly the same reason Bulgarians turned out to protest against a nonexistent government: To voters across Europe, the political system is broken.

Grillo’s campaign is a campaign against the establishment. Few, if any, of his candidates have previous political experience. They were chosen through votes on his blog. The Five Star Movement refused to accept public money. The candidates promised to only take part of their salaries, and not to hold office for more than two terms. Grillo himself said that the elections were “a rejection of politics as it has been presented in recent years: [a rejection of] inefficient institutions and of politics that have appeared as morally non-credible.”

Italian voters had a choice—elect the usual politicians , or vote for some completely unknown faces, some of whom are only in their 20s. A large number voted for the unknown. When new movements have been successful, they’re usually made up of defectors from other parties. It’s rare for a party to start from scratch and come so far so quickly. Can you imagine a brand new party winning 25 percent of the vote in America’s 2016 elections? Or in Britain in 2015?

The way many Italians see it, everyone in power is corrupt. The only solution is to vote for someone completely different—to choose a new system.

It is a pattern that’s playing out across Europe. In November 2011, Spanish Prime Minister Mariano Rajoy swept to power as his center-right Popular Party won its largest majority ever. Fifteen months later, the party is mired in scandals of corruption and Rajoy is struggling to hold on to his job. The Economist cites some shocking polls: 80 percent of voters say the entire party leadership should resign. The two main parties that have governed Spain for the last 30 years would receive only 46 percent of the vote in an election. Ninety-six percent believe most politicians are corrupt.

“[T]he damage to Spain cannot be measured by the fate of a single party at the next general election. Spaniards have lost respect for their politicians” (ibid). Newspapers are making exactly the same statements about Bulgaria and Italy.

Each nation has its own particular scandals. But the feeling spreads beyond national borders.

Even in Germany, under the relatively scandal-free administration of Angela Merkel, the Pirate Party until recently seemed en route to win at least 10 percent of the vote in September’s national election. Like Grillo’s party in Italy, it is made up of political newbies. But with its narrower focus on the Internet and digital rights, it lacks Grillo’s wide appeal. Even so, it began receiving 7 to 8 percent of the vote in regional parliaments before its popularity collapsed amid internal disputes.

Why the widespread unhappiness? A big part is because the corruption is also widespread. But the euro crisis also has a major role. If politicians are getting rich dishonestly, it’s a much bigger deal when unemployment is spiraling out of control and the nation is heading toward poverty. That makes voters much less forgiving.

But it puts Europe in a dangerous position. The last time economies were spiraling downward and populations became dissatisfied not only with their leaders, but with the whole system, what happened? They rallied behind men who promised to overthrow the system and solve their problems for them.

Italy has been a dysfunctional democracy for decades. It’s had over 60 governments in the last 67 years. One lasted only 10 days. Silvio Berlusconi rose to power in the early ’90s on an anti-establishment ticket. Bulgarians, too, have long been fed up with corruption.

But the dissatisfaction is more widespread and more deeply felt than ever before. Many feel they’ve tried all the options that their democracy gives them, and they’ve all failed.

This is how democracy dies. The political parties become dishonest and untrustworthy, and the way is opened for a charismatic outsider to come to power. It has happened before and it will happen again.

The widespread dissatisfaction doesn’t mean Europe is sailing into uncharted territory. It was explored in the 1930s and marked with “Danger, Keep Out.”

For more information on how history is repeating itself, see our article “Déjà Vu.”