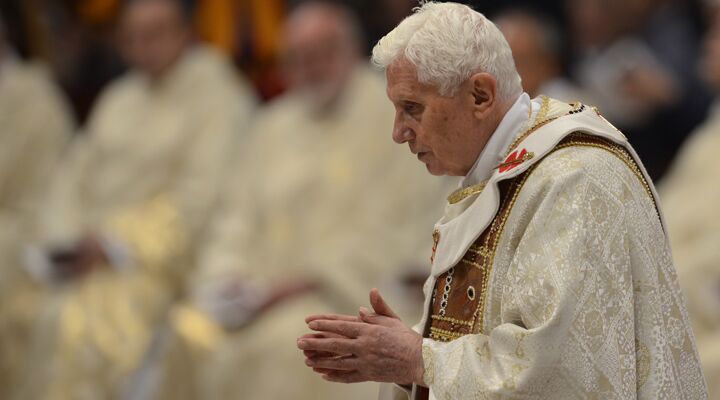 There’s a lot we don’t know about the next pope. Here are two things we do know.

After only eight years on the papal throne, Pope Benedict xvi resigned his post as the head of the Catholic Church earlier today.

The resignation, the first by a pope in nearly 600 years, caught the world by surprise and set off a frenzied international debate about why exactly the pope resigned, why the Vatican and even Benedict’s closest aides were left in the dark about the impending resignation, and who the next pope will be.

The Trumpet doesn’t have specific answers to these questions. We can, however—thanks to what the Apostle Peter termed the “more sure word of prophecy”—set the pope’s resignation in a broader context. Here are two key expectations from the next pope and from the Vatican in the weeks and months ahead.

Under Benedict, the Vatican experienced a renaissance of Catholic tradition and conservatism. Benedict’s Vatican, as many have noted, has a special affection for medieval doctrine and practices, and has emerged as perhaps the most notable defender of tradition, including marriage only occurring between a man and woman. Together, Benedict and the Vatican have waged war on moral relativism, compromise and secularism. Nothing will change under the next administration. In fact, the next pope may be even more conservative, and forceful in his implementation of Catholic doctrine and tradition.

How do we know? Because the next pope will be installed by a Vatican infrastructure created entirely by Pope Benedict xvi and his predecessor, the similarly conservative Pope John Paul ii.

As Trumpet columnist Ron Fraser has explained extensively, over the last few decades Pope John Paul ii and Joseph Ratzinger (now Benedict xvi) have craftily and viciously rooted out liberalism of the Vatican. Together, these men have banished numerous liberal cardinals and officials and replaced them with conservatives cut from the same cloth as John Paul and Benedict. John Paul and Benedict have ensured that the leadership of the Catholic Church—especially those in key positions inside the Vatican—share their own staunch affection for conservative Catholic dogma.

You’ve probably heard that a college of cardinals will be responsible for electing the next pope, apparently before the end of March. Get this: Every last cardinal in this select group was installed by either Pope John Paul ii or Pope Benedict xvi.

Benedictxvi alone is responsible for installing more than 50 percent of the Cardinals that will vote for the next pope!

Did Pope Benedict make this last-minute tweak to secure control and thereby ensure the speedy installment of a specific individual as his replacement? Someone, no doubt, who will continue Benedict’s campaign to create a conservative, traditional Vatican?

Second, expect the next pope to be a staunch advocate of a world-dominating, Catholic united states of Europe. This means he will more than likely be European, and most likely Italian or German.

The financial crisis has left Europe in disarray. Germany leads, but is not loved. Europe knows it needs to unite, but there just isn’t the glue to bring it together. Only the Vatican, as Herbert W. Armstrong explained for years, has the power to weld this divided, cantankerous group together. It’s exactly as Mr. Armstrong described in the August 1978 Good News (emphasis his): “Europeans want their own united military power! … They have made a real effort toward union in the Common Market. … But they well know there is but one possibility of union in Europe—and that is through the Vatican.”

Two years later, Mr. Armstrong delivered a similar prophecy in the June 1980 Worldwide News, one that describes Europe’s current condition perfectly: “World conditions [like a global financial crisis] may force European nations … to unite, bringing to pass the revived ‘Holy Roman Empire’ …. [European nations] have wanted to unite politically, with a common currency and common military force, for some time—but have been unable. It can be accomplished only through the Vatican.”

Pope Benedict xvi was a devoted Europhile and did his part in laying the groundwork for the Vatican to intervene in European affairs. We should expect the next pope to be a much more ardent and energetic advocate of European unification behind Germany! He will also more than likely be a close friend of Germany, and almost assuredly have healthy relationships with German leaders and officials.

Consider one last quote from Mr. Armstrong: “Bible prophecy says this European unification will be also a union of church and state (Revelation 17). Many European political leaders do not want religious domination, or even participation. But they are coming to realize they cannot be welded together into one great European supernation without the unifying power of the Catholic Church” (Nov. 22, 1982). Again, whoever the next pope is, expect him to emerge as a vocal and powerful force in European politics!

In the coming days and weeks, speculation will abound about who the next pope will be and what the Vatican will look like under his stewardship. Although we don’t yet know who this man will be, we do know that he will be conservative, and that he will be a powerful advocate of European integration. We also know, thanks to Bible prophecy, that this man and the Vatican will play a key role in instigating events that will culminate in the greatest event in human history: The Second Coming of Jesus Christ!