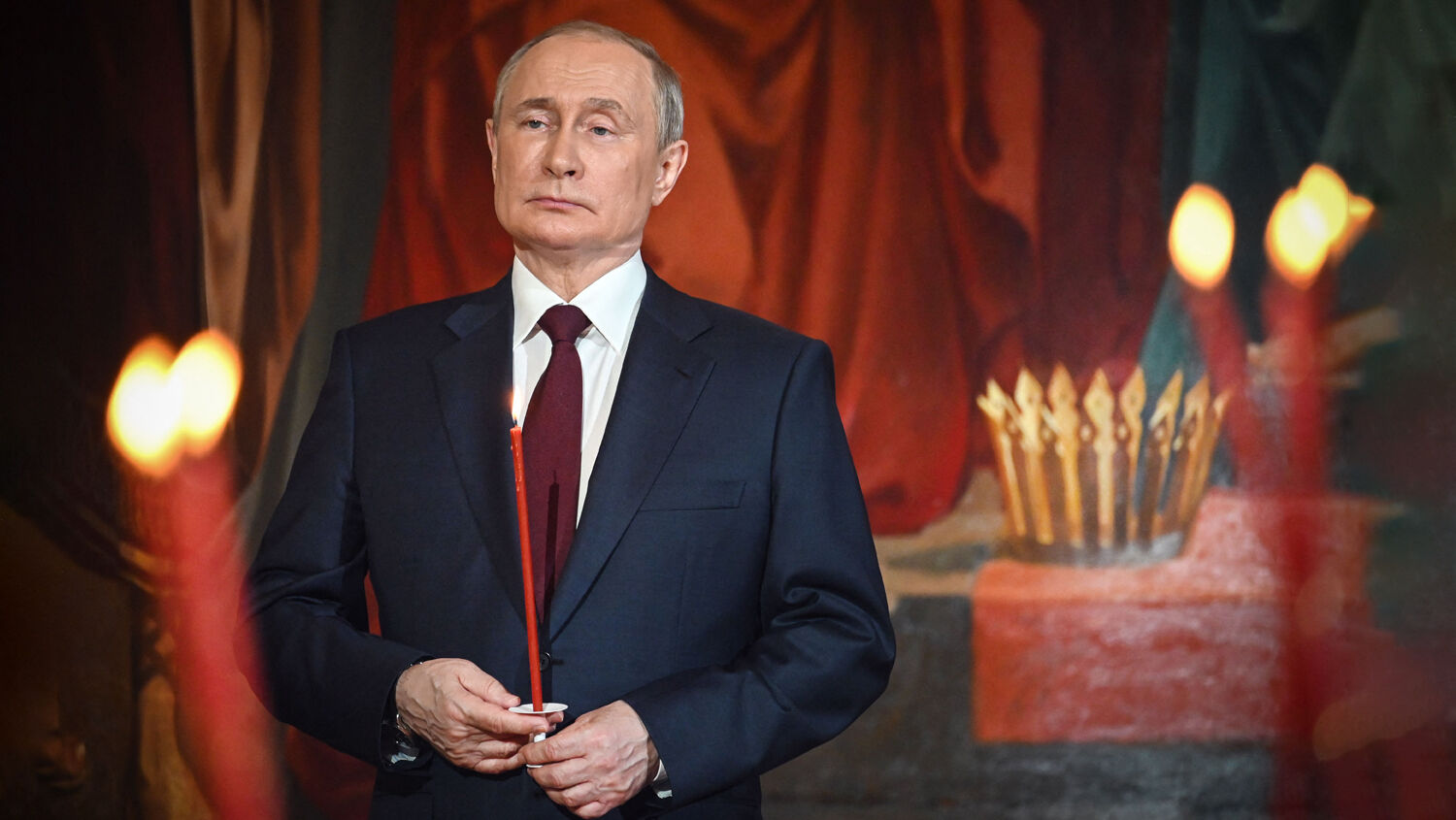 The president is increasingly treading the path of the most murderous and ruthless tyrant in Russian history.

When Soviet leader Joseph Stalin set his sights on Poland at the start of World War ii, he could have followed the example of his Nazi allies and simply taken his half of the nation by unabashed force. But Stalin instead decided to go to a great deal of trouble so he could hang a grotesque mask of legitimacy on his annexation. After half a million of his troops had massacred tens of thousands of Poland’s soldiers and civilians, he staged a sham referendum in which eastern Poland’s people were made to vote on whether to join the Soviet Union. Then upon learning that more than 90 percent were in favor of joining, Stalin graciously accepted the “will of the people,” and the conquest was complete.

When he began absorbing the Baltic states the following year, Stalin directed more performances of the same basic theatrics and again claimed that more than 9 in 10 voters in the conquered nations wanted to join his wicked empire.

In light of this history, it should have come as no surprise over the last week when Stalin’s successor in the Kremlin, Russian President Vladimir Putin, staged gun-point referendums in areas of eastern Ukraine that his forces are occupying. These are some of the same areas where Russian invaders have subjected inhabitants to unspeakable barbarity—Donetsk, Luhansk, Kherson and Zaporizhzhia.

Mobile “referendum”. It is always more convenient to vote when two soldiers with machine guns are knocking at your apartment. Zaporizhzhia region pic.twitter.com/4DPihwwnFw

According to the Kremlin, the survivors of this massacre just voted overwhelmingly to join the perpetrators pic.twitter.com/g1ca2JnxoK

By going to the immense trouble of forcing hundreds of thousands to physically participate in a predetermined, utterly shambolic vote just to be able to tell an elaborate lie that no one believes, Putin is carrying on a long-standing Russian tradition. He is walking in Stalin’s footsteps.

Early on September 30, Putin announced that the annexation was complete and the four Ukrainian regions were now part of Russia. With some 42,000 square miles of land, this marks the largest annexation in Europe since World War ii. Kyiv-based analyst Taras Revunets told the Trumpet that the event will “go down in history as Putin’s grandest Stalin wannabe moment.”

And this is far from the only area where Putin is treading Stalin’s path. “Wherever he can,” Revunets said, “Putin follows Stalin’s playbook.”

Russia’s most murderous and ruthless tyrant was born in 1878 as Joseph Dzhugashvili, but in his youth, he gave himself the more terror-inspiring name Stalin, which means “man of steel.” In his early years, Stalin obsessed over the works of Karl Marx and joined the revolutionary Bolshevik party to help topple the czar. His first contributions to the party were fundraising efforts, carried out by theft and kidnapping children of wealthy families for ransom.

In November 1917, the Bolsheviks violently took over Russia with Vladimir Lenin as their head and Stalin as a top enforcer. They promised the Russians a communal utopia and set their hands to bringing it about: They shuttered all media critical of their revolution, created a cold-blooded internal security service (the forerunner to the kgb), and started executing “enemies of the state,” which included wealthy families, clergy members and former nobles.

After Lenin’s death six year later, Stalin outfoxed his Bolshevik rivals to become the new leader of the party and the country. He collectivized agriculture, significantly increased the powers of the secret police, and created a culture built on Soviet citizens spying on each other. Stalin introduced the Great Purge, a drive to “cleanse” Soviet society of anyone viewed as disloyal to his regime, either by summary execution or being slowly worked to death in a gulag camp. Some 18 million people entered his gulags, and millions never left. Altogether, Stalin slaughtered as many as 20 million.

Putin was born into Stalin’s Soviet nightmare in 1952, just five months before the tyrant died. In 1975, at age 22, he joined the kgb, where he worked for 15 years as a government enforcer.

“Mr. Putin was shaped and molded by the infamous kgb—Russia’s ruthless, murderous secret service arm of the government made famous by Joseph Stalin,” Trumpet editor in chief Gerald Flurry wrote in January 2004. At the time that Mr. Flurry wrote those words, Putin had been head of Russia for only four years, and few saw him as a despot in the making or a threat to the global order. But Mr. Flurry recognized the links between Stalin, the kgb and Putin, and he warned that the “whole world should be alarmed.”

In 2008, Mr. Flurry again likened Putin to Stalin, stating that he was certain that the Russian president had entered into a secret deal with German rulers, similar to the one Stalin enacted with Adolf Hitler in 1939 that mapped out the way the two sides would split up Poland and helped bring about World War ii.

In his 2017 booklet The Prophesied ‘Prince of Russia,’ Mr. Flurry’s comparisons were even more incisive: “Putin has a long pattern of diabolical evil on the level of Joseph Stalin. An abundance of fruits prove that. … No leader in Russia has equaled Putin’s diabolical evil since Joseph Stalin.”

In the time since that booklet was written, and especially since this year’s full-scale war on Ukraine started, those “fruits” have become far more abundant. Putin was molded by the ugly and merciless system that Stalin established. And he is increasingly treading Stalin’s path. “He stages sham referendums and redraws state borders,” Revunets said, adding that in some ways, Putin “has even surpassed the post-World War ii version of Stalin.”

Putin buys into the Stalinist view that totalitarianism, built on ruthless coercion, is the most effective—and perhaps only—way to govern the Russian people. “Russians need a czar,” Stalin said on many occasions. Putin has begun comparing himself to Peter the Great, the 18th-century czar who was equal parts empire builder and ruthless killer.

Putin’s repression of his own people—with ceaseless propaganda and lies, ubiquitous displays of fanatical patriotism, quashing of protests, total control of media and the cultivation of a cult of terror—increasingly mirrors that of Stalin. There are not yet gulags full of political prisoners of all stripes, but Putin’s notoriously abusive and inhumane penal colony system is resembling the gulags more with each year.

Like Stalin, Putin is obsessed with the annihilation of Ukraine’s statehood and sovereignty. And the forces of both committed unspeakable atrocities in pursuit of that annihilation.

“Putin quotes the United Nations Charter and launches a ‘special military operation’ that undermines every core principle written into that organization—written with the blood and bones of millions,” Revunets said.

The history of Stalin’s evil reign, which Putin is increasingly imitating, points to a bleak future for Russia, Ukraine and the world. When that history is placed alongside Bible prophecy, the indication becomes a certainty.

The Bible cautions that a gargantuan power will rise from the east in the modern era. Revelation 16:12 calls this power “the kings of the east.” In Revelation 9:16, the Apostle John wrote that this mega-force will have an army of 200 million men.

The Bible provides many vital details about this largest army ever assembled. Daniel 11:44, 12:1 and Matthew 24:21-22 show that it will be among the primary belligerents in a nuclear World War iii. Ezekiel 38 tells which specific countries will contribute soldiers to it and shows that it will be led by one nation—and one man. Verse 2 states: “Son of man, set thy face against Gog, the land of Magog, the chief prince of Meshech and Tubal, and prophesy against him.”

Bible scholars generally concur that “Gog” refers to Russia and “the land of Magog” includes the vast area where modern-day China is located. Meshech is related to the modern Russian spelling of Moscow: MocĸBa. And Tubal refers to the Russian city of Tobolsk, to the east of the Ural Mountains.

Still another name for all of Russia is somewhat furtive in this passage. There is disagreement over how the Hebrew word rosh in this verse should be rendered in English. The King James Version quoted above translates it as the adjective “chief.” But the accurate translation renders it as a proper noun: Rosh. This is an ancient name for the people who became known as Rus—Russia.

So the identity of this “prince” of Russia, Moscow and Tobolsk begins to take discernible shape: The listing of all three names shows that this is one man ruling over all the various peoples across Russia—from west to east.

The mention of Magog shows that this man’s leadership extends beyond the borders of Russia and into China. Verses 5-6 mention ancient labels for the peoples of such nations as India and Japan, showing that these nations will also lend military power to this Russia-led bloc.

Mr. Flurry wrote in the Trumpet’s September 2014 issue that when these Bible passages are studied alongside current events in Russia, the identity of this “prince of Russia” becomes clear. “I strongly believe Vladimir Putin is going to lead the 200 million-man army. Just look at the power he already has. Can you think of any other Russian politician who could become so powerful and have the will to lead Russia into the crisis of crises? I see nobody else on the horizon who could do that.”

By the time he wrote The Prophesied ‘Prince of Russia’ in 2017, Mr. Flurry was even more convinced that Putin would personally fulfill this role. “His track record, his nationality and his ideology show that he is fulfilling a linchpin Bible prophecy,” he writes. “The time frame of his rule also shows that nobody else could be fulfilling the Ezekiel 38 and 39 prophecy.”

It is apparent that a grim future is coming for Russia, Ukraine and the world. But Mr. Flurry says the fact that this “prince of Russia” is now in power shows that the most hope-saturated event in mankind’s history is now near. “Vladimir Putin is a sign, literally a sign, that Jesus Christ is about to return!” he writes in his booklet. “This is one of the most inspiring messages in the Bible. What we are seeing in Russia ultimately leads to the transition from man ruling man to God ruling man!”