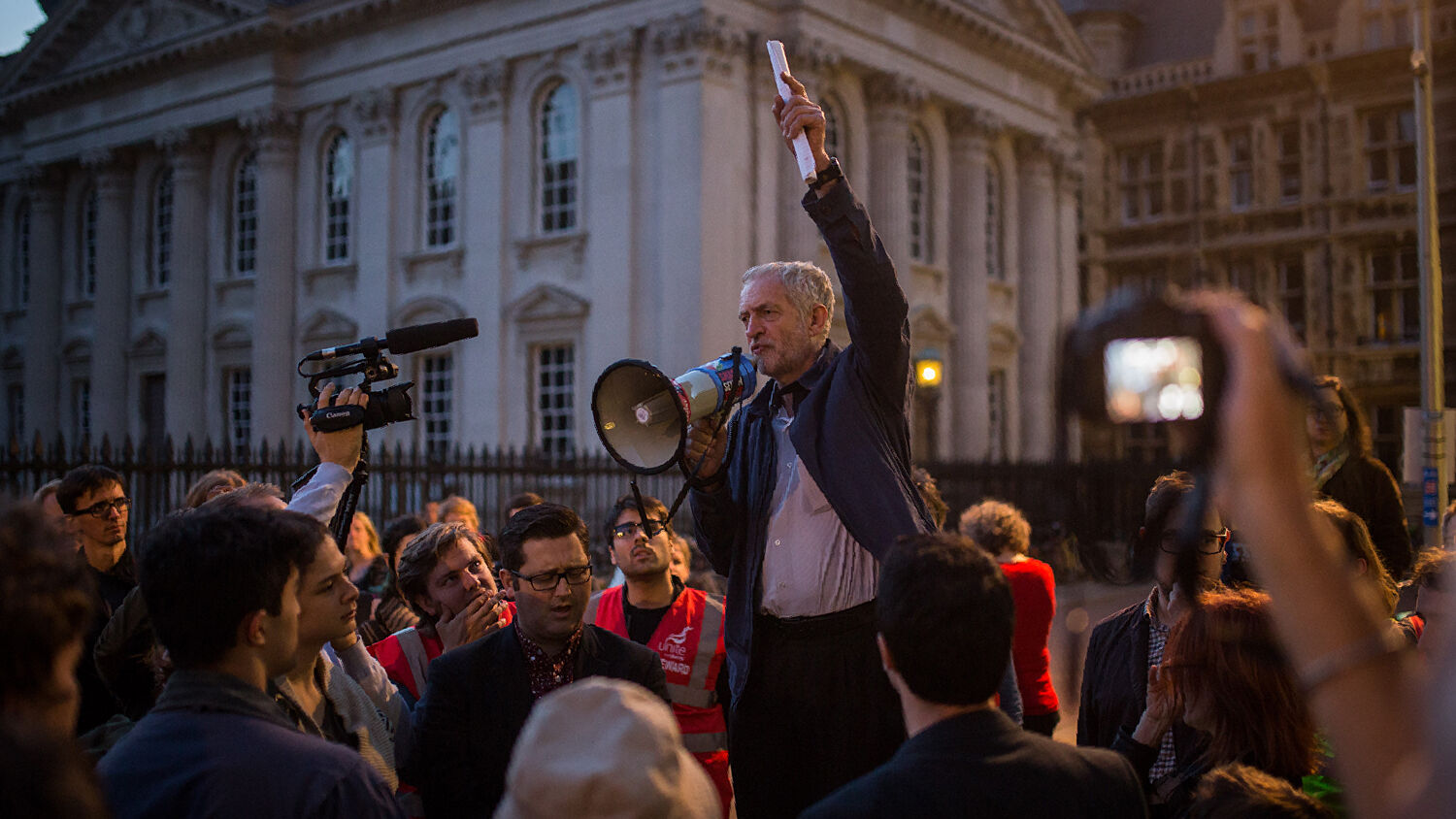 warwickshire, england
This was supposed to have been a single-issue election for the United Kingdom: Brexit. Conservative leader Boris Johnson is vowing to bring Britain out of the European Union the following month; Lib-Dem leader Jo Swinson is vowing to revoke the 2016 referendum and remain in the EU; Labour Party leader Jeremy Corbyn is vowing something in-between. Instead, it has turned into a multiple-issue election, and with one “issue” highlighted in particular: the future of the Jews in the United Kingdom.

It all came to a head yesterday, after Britain’s Chief Rabbi Ephraim Mirvis published an op-ed in the Times titled “What Will Become of Jews in Britain If Labour Forms the Next Government?” His article was a stunning blow to the Labour Party for accusations of anti-Semitism that have dogged the party (primarily, leader Jeremy Corbyn) for years. It is the first such action taken by a leading religious leader during an election campaign.

Headlines from news websites around the world include the following:

Mirvis wrote that “the overwhelming majority of British Jews are gripped by anxiety.” He continued:

This anxiety is justified. Raising concerns about anti-Jewish racism in the context of a general election ranks among the most painful moments I have experienced since taking office. Convention dictates that the chief rabbi stays well away from party politics—and rightly so. However, challenging racism is not a matter of politics; it goes well beyond that.

Mirvis proceeded to address the deeply concerning anti-Semitism within Corbyn’s Labour Party. (For the record, Mirvis did not instruct readers not to vote for the Labour Party; he laid out his case, as a representative of his community, and asked the public to “vote with their conscience.”) In the hours since the story was released, Britain’s chief Christian leader, Archbishop of Canterbury Justin Welby, has come out in support of Mirvis’s statements, describing UK Jews as living with a “deep sense of fear.”

The latest front page news follows a united front last July by the three primary UK Jewish papers, all declaring the same headline and lead content: “United We Stand.” The papers proceeded to decry a Corbyn-led government, stating that such would mean an “existential threat to Jewish life.”

This is the single most astonishing front page we’ve run at @JewishChron in my decade here. It is totally without precedent. Our paper has been published since 1841. @JewishNewsUK and @JewishTelegraph are our rivals - in name, in business, and on stories pic.twitter.com/peRUPRnqIX

The Labour Party was once the Jewish mainstay in Britain. Yet over the past decade, and particularly since Corbyn rose to the head of Labour in 2015, the party has been plagued by accusations of anti-Semitism. Thousands of cases of alleged anti-Semitic statements within the Labour Party have been recorded since 2015, with a large number of members of Parliament implicated and numerous others quitting their jobs in protest. This year, two of the party’s Jewish female M.P.s resigned, citing anti-Semitism and abuse within the party. Here’s a couple of the more high-profile cases:

Corbyn himself is no stranger to personal accusations of anti-Semitism and even treason. He is well known to have met with leaders of terrorist organizations, including Hamas, Hezbollah and the Irish Republican Army. One of his most damning statements is: “It will be my pleasure and my honor to host an event in Parliament where our friends from Hezbollah will be speaking. I’ve also invited friends from Hamas to come and speak as well” (emphasis added throughout). (You can watch a fiery media confrontation here, where Corbyn attempted to defend calling terrorist organizations his “friends.”) Corbyn also got into hot water for defending street art that displayed apparent anti-Semitic tropes; he later claimed that he didn’t look at the mural “closely” enough—agreeing it was anti-Semitic. He has been condemned for repeat appearances at Deir Yassin commemorations hosted by an organization founded by avid Holocaust denier Paul Eisen. Corbyn has also called the killing of Osama bin Laden a “tragedy,” wishing instead that both he and recently-killed Islamic State leader Abu-Bakr al-Baghdadi would have been arrested and given a trial (though how this would work in practice—especially given Baghdadi was wearing a suicide jacket—strains credulity). The list goes on.

Of course, Jeremy Corbyn has denounced anti-Semitism—but words ring hollow against actions. So the concerns of the Jewish community are not unfounded. In a September 2018 poll, 39 percent of the British public believe Jeremy Corbyn is anti-Semitic (alongside 86 percent of Jews).

Even official Labour government policy joins the list of “infractions.” Labour adopted a “working definition” of anti-Semitism, based on the 11-example definition produced by the International Holocaust Remembrance Alliance in 2016, but omitted four of those examples as constituting anti-Semitism. Thanks to pressure, the party later adopted three of the definitions and added the last one in 2018, albeit begrudgingly.

The Labour Party, of course, has by and large refuted claims of toxic anti-Semitism within the party but has conducted “reviews,” “reeducation” and “punishment” of members accused of anti-Semitism. The effectiveness of such actions aside, part of the problem is just how sluggish the party is in dealing with anti-Semitic abuses. On the one hand, if M.P.s fail to toe the party line and vote contrarily in Parliament to Labour positions, they are kicked out within days, if not hours. On the other hand, there’s the above example of Ken Livingstone, who finally resigned from the party himself two years after his comments about Hitler and the Jews, because the backlash was dragging out for so long. Naz Shah also resigned.

It is apparent to much of the general public that anti-Semitism in the party is only dealt with after a public outcry. Only then is it addressed, to save face. Chief Rabbi Mirvis wrote:

The claims that the party is “doing everything” it reasonably can to tackle anti-Jewish racism and that it has “investigated every single case” are a mendacious fiction. According to the Jewish Labour Movement, there are at least 130 outstanding cases before the party, some dating back years, and thousands more have been reported but remain unresolved.

Jewish voters in the UK are hardly a “Leave” (the European Union) constituency. But according to poll numbers, 93 percent will not vote for Labour. That is significant, considering the Labour Party is Britain’s second-biggest party and the “opposition party” to the governing Conservatives. Again, the Jewish vote was once a Labour stronghold. But if Corbyn is elected, nearly half of those polled would “seriously consider” leaving the country. This is significant, considering there are nearly 300,000 Jews in Britain (the country’s fifth-largest religious community). Mere talk of such an exodus—and what it has taken to get to this point—is chilling.

Mirvis continued, “The Jewish community has endured the deep discomfort of being at the center of national political attention for nearly four years. We have been treated by many as an irritant, as opposed to a minority community with genuine concerns.”

The party leadership have never understood that their failure is not just one of procedure, which can be remedied with additional staff or new processes. It is a failure to see this as a human problem rather than a political one.

It is indeed. Anti-Semitism has been a plague for millennia. Why such hatred for such a minority?

The Hebrew Bible contains the answer. The Jewish people were chosen by God. Whether you believe that or not, that is the foundation upon which Israel was built and established thousands of years ago. That was the basis of the ancient kingdom of Israel, governed from Jerusalem.

The Bible—and common sense—makes clear that this world currently is not dominated by God. It is dominated by an evil spirit, Satan the devil. And anything that God favors, the devil persecutes and vilifies. We see this on a daily basis with the absolutely irrational, nonsensical loathing toward Jews. So often it is beyond the bounds of reason—and at its extreme, reaches heights of the Holocaust and pogrom that defy nature.

In his booklet The Key of David, Trumpet editor in chief Gerald Flurry writes, “Most people who hate the Jews don’t even know why they do. Can we see Satan behind such lies and hatred?” He continues:

Satan can stir up vicious hatred. He loves to use out-of-control emotions. A religion taken to the extreme—such as radical Islam—gives him a great field to work in. Nazi Germany exhibited fanatical hatred for the Jews. The Nazis also used emotion to stir up a repugnant hatred. The coming [prophesied European superpower] will exhibit the same hatred for the Jews as well.

Anti-Semitism is an extremely slippery slope. Because it is not governed by normal reason or thought processes. It is a satanic drug that enslaves the anti-Semite and brings tragedy to the Jew.

And it is not going away—yet.

Satan the devil understands the plan of God. He has a great hatred for God. Because of the plan of God, the word Jew can really stir up Satan’s wrath. The Jews are a type of what all men are to become spiritually. It is God’s association with the Jews that has turned Satan even more violently against them! Hatred for the Jews has been inspired by Satan. He knows that he was never offered what has been offered to mankind. He wants nothing more than to destroy the plan of God.

God has a specific plan outlined in the Bible—not just for Jews but for all mankind. The Jews have played an integral role in that plan. You can read about it in detail in our free book Mystery of the Ages, by Herbert W. Armstrong.

Bible prophecy makes clear that anti-Semitism will not be around much longer. In the meantime, God promises His protection to those who draw near to Him and keep His commandments. As the famous psalm states: “Yea, though I walk through the valley of the shadow of death, I will fear no evil: for thou art with me; thy rod and thy staff they comfort me” (Psalm 23:4). By obeying God, we can have full assurance that He will indeed be with us.