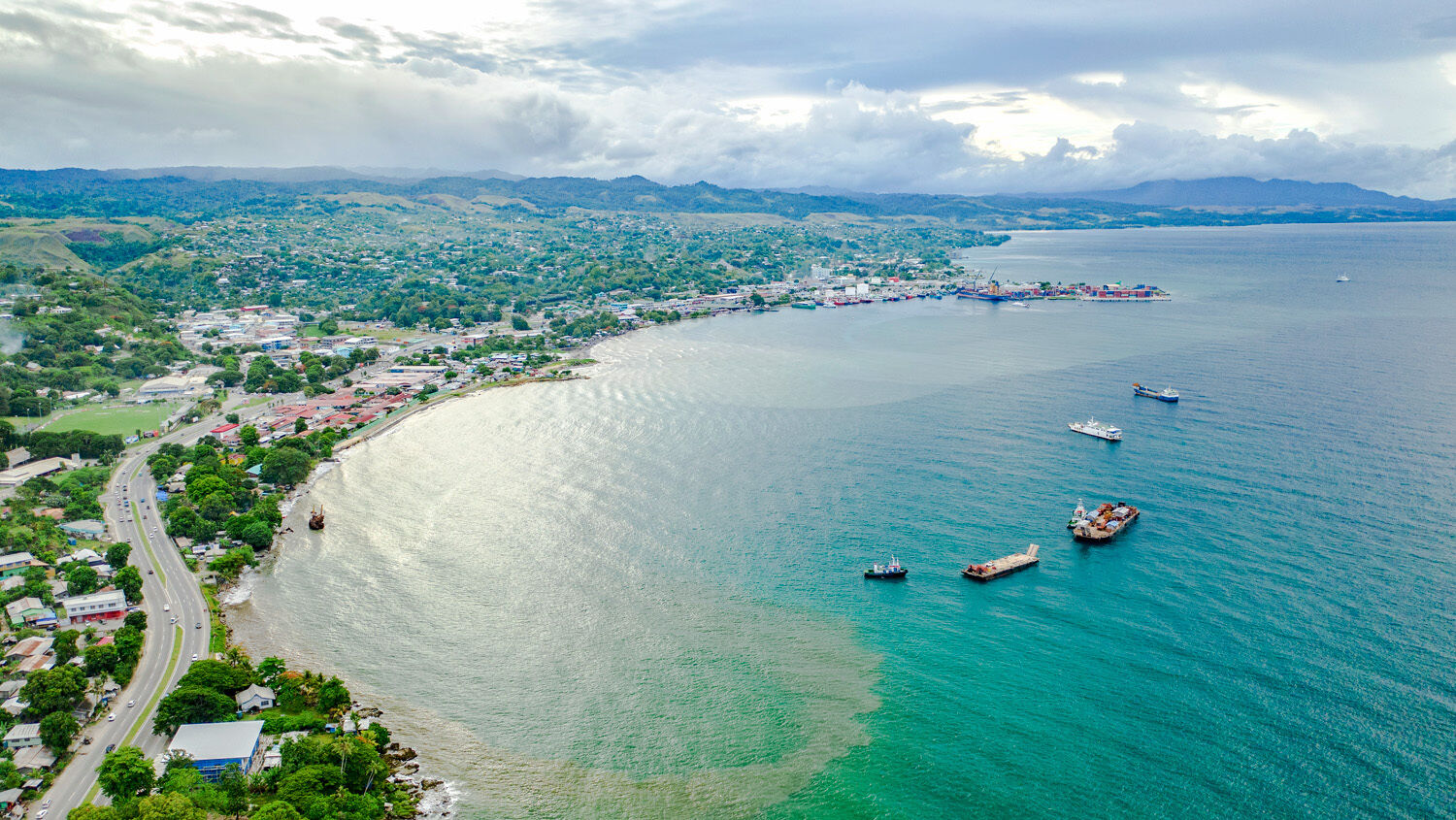 ‘Australia should be worried about it.’

China is preparing to buy a Solomon Islands plantation that features a deep-water port and an airstrip, Four Corners reported on August 1. China watchers view it as the latest signal of Beijing’s intention to build a naval base on the island nation.

The Chinese Communist Party is working through the state-owned company China Forestry Group to acquire the 55-square-mile plantation, called Kolombangara Forest Products. The property lies on the island of Kolombangara and includes what Solomon Island officials say is the nation’s best natural deep-water port.

“It’s exceptionally deep,” Edwin Schramm, general manager of the plantation, told Four Corners. He calculates the port’s depth to be 130 to 165 feet near the wharf, and 65 feet at the wharf itself. Schramm said this depth makes it a “really well-suited natural port for big vessels to come in and berth.”

Plantation employees believe this port is what drew the Chinese to the Kolombangara property. When a Chinese delegation visited, employees say they showed almost no interest in the island’s other features, and asked a series of questions about the port.

If the Chinese make the property a base for the People’s Liberation Army Navy, the implications will be particularly serious for Australia, which relies on the shipping lanes near Solomon Islands and elsewhere in the South Pacific.

“Australia should be worried about it,” Silas Tausinga, a Solomon Islander member of Parliament, told Four Corners. “To suggest that we should have another country coming in here as a security partner, to even suggest the idea of having to build a military base, who are we building a military base for? Who are our enemies?”

This purchase plan is clearly not about safeguarding Solomon Islands from any would-be enemies, but about positioning the Chinese to push against theirs.

It was only in 2019 that the Chinese convinced the Solomon Islands’ leadership to switch diplomatic loyalty from Taiwan to China. The Trumpet said at the time that the move advanced “China’s quest to dominate vital shipping lanes in the South Pacific.” Then this March, a leaked draft showed that Solomon Islander Prime Minister Manasseh Sogavare was forging a security pact with Beijing that would legally authorize China to station troops and armaments in Solomon Islands.

The latest news about the Kolombangara plantation suggests that China is now close to putting its new legal latitude to use.

Beautiful Kolombangara Island, Solomon Islands. My children’s birthright and inheritance about to be sold to China for use as a port.

A recent Defense White Paper sounded the alarm about the danger of Solomon Islands and neighboring nations becoming military hubs for China: “Australia cannot be secure if our immediate neighborhood, including Papua New Guinea, Timor-Leste and Pacific Island countries, becomes a source of threat to Australia. This includes the threat of a foreign military power seeking influence in ways that could challenge the security of our maritime approaches ….”

The Trumpet wrote in June 2019 that the strategic location of Solomon Islands and neighboring nations is the reason China is targeting them: “Fiji, Papua New Guinea, Vanuatu and the Solomon Islands sit astride the most vital shipping lanes in Australasia. If China is able to militarize these shipping lanes, it will be able to isolate Australia and become master of the South Pacific.”

A Chinese ability to overpower Australian and American influence to become “master” of this region aligns with the forecasts of Bible prophecy.

Genesis 22:17 records God promising the Patriarch Abraham that his “descendants” would one day “take possession of the gates of their enemies” (International Standard Version).

In The United States and Britain in Prophecy, the late Herbert Armstrong showed that the peoples of the United States and United Kingdom—including British Commonwealth countries such as Australia—are the modern-day descendants of Abraham’s grandson Israel and Israel’s son Joseph. Mr. Armstrong showed that this promise in Genesis 22:17 was fulfilled before World War ii, when Britain and America gained control over all major sea “gates,” such as Hong Kong, Panama and Suez, as well as numerous minor gates, including Solomon Islands.

Based on this scripture in Genesis 22, Mr. Armstrong said the fact that the UK and U.S. came to control these strategic oceanic locations proved that these nations are the descendants of Abraham’s family. “[W]e must be modern Israel,” he wrote.

America and Britain used their hold on these locations to defeat aggressor powers during both world wars, including a historic World War ii campaign from Solomon Islands that resulted in a major loss for Japan. In peacetime, the U.S. and Britain used their control over such locations to keep the world’s shipping lanes open and relatively stable—to the benefit of all countries.

But the Bible also prophesied that Britain and the U.S. would later lose their hold of these strategic sea gates.

For this to happen, the U.S. and UK first had to lose control of the gates they had previously acquired. This has occurred in recent decades with the transfer of Hong Kong, Panama and other such holdings away from American and Britain—and mainly to China. And now Solomon Islands can be added to the list. Trumpet editor in chief Gerald Flurry explains in Isaiah’s End-Time Vision how China and other powers will soon use their control over these gates against the modern descendants of Israel. He writes:

Mr. Flurry explains that the decline of the U.S. and Britain and the rise of China and other revisionist nations will culminate in a time of unprecedented catastrophe for America, Britain, Australia—and for all the world. But he emphasizes that the suffering has a definite purpose: to teach the people of the world to love God’s law. And he stresses that the time of suffering will be immediately followed by an age of unprecedented peace. “Thank God,” he writes, “there is great news beyond the bad news.”

To learn more about the detailed Bible prophecies at the foundation of Mr. Armstrong’s and Mr. Flurry’s forecasts, and the hope that lies at the heart of these prophecies, order your free copy of Isaiah’s End-Time Vision.