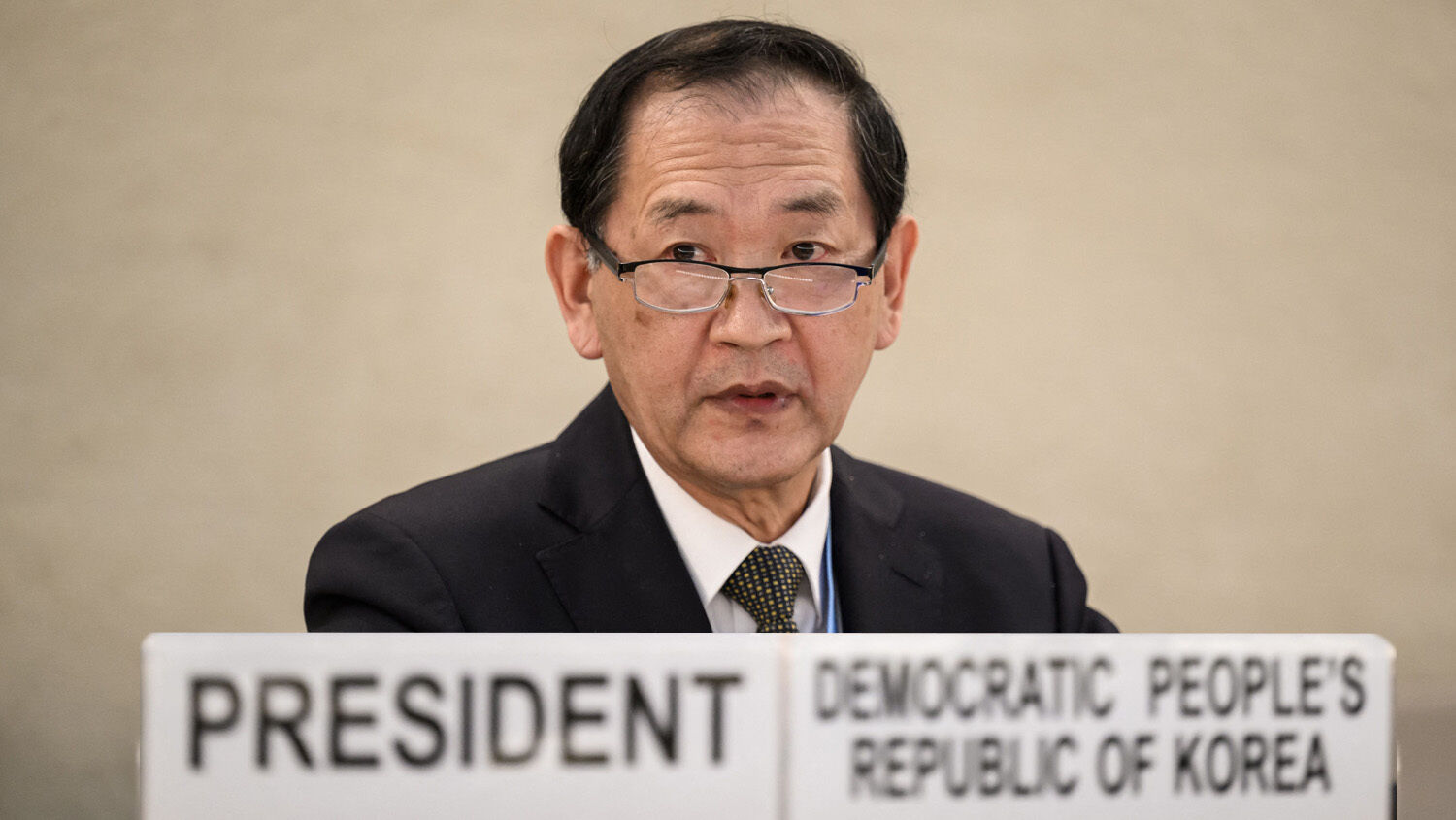 North Korea’s ambassador to the United Nations in Geneva Han Tae Song chairs the Conference on Disarmament during a UN plenary session in Geneva on June 2.
FABRICE COFFRINI/AFP via Getty Images

‘Like putting a serial rapist in charge of a women’s shelter.’

North Korea assumed the presidency of the United Nations Conference on Disarmament on May 30, where it is intended to lead global efforts aimed at transparency on nuclear arms, ending nuclear proliferation, and preventing nuclear war.

The glaring problem is that North Korea, under dictator Kim Jong-un, is among the world’s foremost proliferators of nuclear weapons. It regularly violates its treaty commitments by bolstering and testing its arsenals, illegally sells missile and nuclear secrets to other rogue regimes, and routinely threatens other United Nations member states with missiles.

Hillel Neuer, executive director of UN Watch, pointed out the absurdity of the appointment: “Having the North Korean regime of Kim Jong-un preside over global nuclear weapons disarmament will be like putting a serial rapist in charge of a women’s shelter.”

He continued, “North Korea holding the president’s gavel is liable to seriously undermine the image and credibility of the United Nations, and will send absolutely the worst message.”

Neuer is right about the message this decision sends about the UN and the way it undermines its credibility. But as ludicrous as it is, this is hardly the first time the organization has made such an absurd appointment.

In 2007, Iran—the nation that openly brags about how it lies to the world regarding its nuclear weapons program—was made vice chairman of this same disarmament commission. Also in 2007, Zimbabwe was elected chair of the Commission on Sustainable Development, just months before the culmination of the nation’s notorious hyperinflation crisis. In 2017, the UN appointed Saudi Arabia—where hijab-clad women can’t go anywhere, even to the police, without their male guardian—to its women’s rights commission. In 2020, China—which was known to have at least a million of its people in barbarically abusive concentration camps—was appointed to join a United Nations Human Rights Council panel where it will heavily influence the selection of the organization’s human rights investigators.

The list of preposterous UN appointments and elections could go on and on. Since the organization is wracked by corruption, it has often given key positions to the most outrageous candidates available. The UN’s largest failure though is that it has not accomplished its stated purpose: keeping the peace. Since the UN’s inception in 1945, there have been more than 400 wars and other military conflicts.

One analyst understood from the start that the UN would be not only a failure at peacekeeping but actually a catalyst to conflict. “Already I see the clouds of World War iii gathering at this conference,” the late theologian Herbert W. Armstrong said while attending the organization’s inaugural conference in 1945. “I do not see peace being germinated here, but the seeds of the next war!”

In 1977, Mr. Armstrong wrote, “The United Nations won’t be able to bring peace. The aggressor nations—and we are so gullible we never recognize them until after they plunge the world into another war—will go right on with their scheming and diabolical planning for world rule.”

Mr. Armstrong clearly saw that the United Nations would not—could not—usher in peace to this world. How did he know? By studying God’s Word, which reveals the nature of man. The Apostle Paul said, “And the way of peace have they not known” (Romans 3:17). Mr. Armstrong understood from his Bible study that mankind could never bring peace to this Earth and that peace is only possible by Jesus Christ’s return and His world-ruling government (Revelation 20:4-6; Isaiah 2:2-4; 9:6-7; 11:1-9).

The decision on May 30 to appoint North Korea to the disarmament panel shows that the UN has descended from a failure to a farce. It shows that humankind is as far as ever from being able to solve its own problems. It shows that Mr. Armstrong’s analysis all those years ago was accurate.

To understand how Mr. Armstrong was able to correctly identify the true nature of the United Nations, even from its inception, order your free copy of our booklet He Was Right.