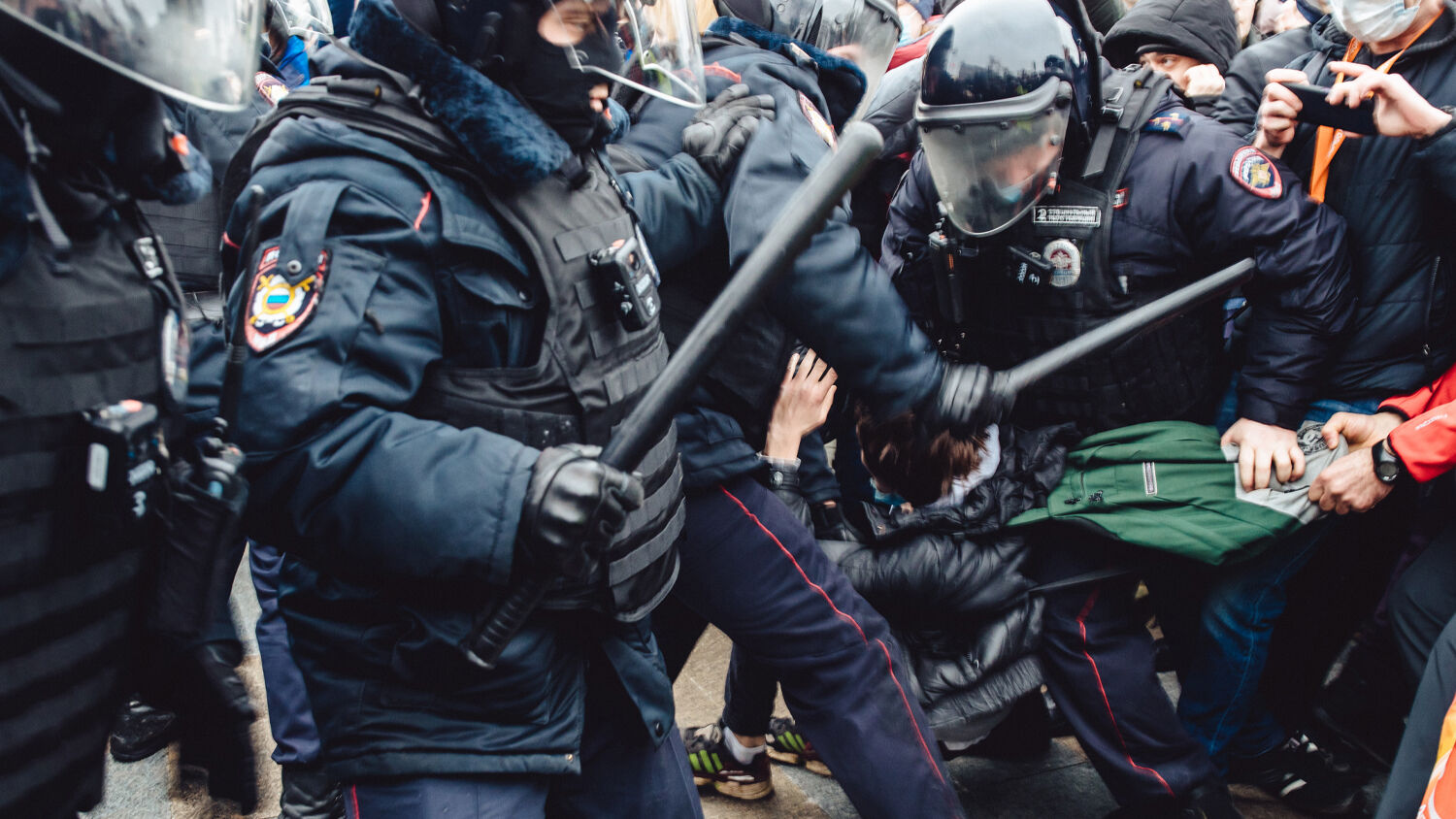 As Russians continue to protest the arrest of opposition leader Alexei Navalny and falling living standards, some analysts say it means the end is near for President Vladimir Putin.

“Putin should recognize his time is up,” the Observer wrote on January 24.

“The biggest protests in years … could spell the beginning of the end for Vladimir Putin,” the Independent wrote the following day.

“Sooner or later the situation will explode,” Boris Akunin wrote for Echo of Moscow.

It is true that great numbers of Russians are appalled by the arrest of Navalny upon his return to Russia from Germany in mid-January. Navalny is famous for his track record of exposing Putin’s corruption and organizing numerous protests against it. As a result, Putin’s government has arrested and jailed Navalny more than 10 times over the last decade. But last August, Putin apparently decided that imprisoning him was no longer enough and had Navalny poisoned by a weapons-grade nerve agent. The poisoning was nearly fatal, but German officials convinced the Kremlin to let Navalny be transferred to Berlin for treatment. After months of advanced care in Germany, Navalny recovered. And on January 17, he made the decision to return to Russia to continue his battle against Putin’s authoritarianism.

But shortly after his plane landed, Russian authorities arrested him. By leaving Russia, they said, he had violated the probation terms from one of his previous arrests. More than 100,000 Russians took to the streets last weekend to protest, marking the largest nationwide display of dissent since 2011. The demonstrations became violent in several cities and resulted in more than 3,700 arrests. More than 1,400 of these occurred in Moscow.

Evgeniya Ragozina, 28, who demonstrated in the city of Tyumen, told the Wall Street Journal that the protesters are concerned about Russia’s “real problem with corruption.”

She added that the Kremlin’s crackdown on Navalny is only part of the reason why she and so many others have taken to the streets. A larger motivation is more personal: “People are more scared of the fact that they don’t see a decent future for themselves,” she said.

It is not hard to see why the future looks bleak for Ragozina and other Russians. Last year, the value of the ruble fell by 20 percent, triggering increased inflation and unemployment and a dramatic rise in poverty levels. Meanwhile, as the suffering of the Russian people intensifies, Navalny’s team released a video on January 19 featuring an extravagant palace on the shores of the Black Sea that was allegedly built for Putin. The property includes a helipad, an indoor hockey rink, a casino—and even a private harbor.

The two-hour video has already been watched 100 million times and prompted a rare statement from Putin denying that the palace belongs to him. But for many Russians who are struggling to keep their families fed, and who believe the palace was built with taxpayer rubles, such denials ring hollow.

Putin denies @navalny’s report about his Black Sea palace, which he says “has never belonged to me or my close relatives.”

Truly remarkable that Putin, who steadfastly avoids even so much as saying Navalny’s name in public, would go this far. The Kremlin really must be rattled. pic.twitter.com/Zkq47dLnyT

As the tension builds, protests planned for the coming weekend could be even larger than last weekend’s. The pressure against Putin is growing, and it is not difficult to see why some believe this could be the end for him. But the Trumpet believes Putin will remain in office—and even survive politically in the longer term. This is our view mainly because of statements in the world’s most reliable geopolitical authority: the Holy Bible.

It would be easy to scoff at that statement, but consider the Bible’s track record in forecasting major geopolitical events. Scripture foretold the rise and fall of the Chaldean Empire, the Persian Empire, the Greco-Macedonian Empire, and several iterations of the Roman Empire. Long after those scriptures were written, all these kingdoms rose and then collapsed, just as the Bible had said they would.

In the case of the Greco-Macedonian Empire, the Bible even prophesied the vital role that would be played by one individual: Alexander the Great. Some 200 years before Alexander was even born, the book of Daniel foretold of his rule, conquests and sudden death. Alexander was actually shown the scriptures that foretold his rule, and he believed that he did, in fact, fulfill the prophecies. First-century historian Josephus recorded the event, which happened when Alexander visited Jerusalem and met with the high priest, Jaddua. “And when the book of Daniel was shewed him, wherein Daniel declared that one of the Greeks should destroy the empire of the Persians, he supposed that himself was the person intended; and as he was then glad …” (Antiquities of the Jews, Book 11, Chapter viii, Section v).

Alexander the Great is not the only history-altering individual whose rule and impact was prophesied by Bible writers. Among the others are Jewish King Josiah, Persian King Cyprus and even British Prime Minister Winston Churchill. All were prophesied to come onto the scene generations before they were born.

And there is another important man whose appearance was foretold in the Scriptures: Vladimir Putin.

Around a.d. 90, the Apostle John recorded an astounding prophecy: “And the number of the army of the horsemen were two hundred thousand thousand: and I heard the number of them” (Revelation 9:16). That is describing a modern-era army that will emerge with 200 million men—far more people than were even alive when that prophecy was written.

The Bible provides many vital details about this largest army ever assembled on Earth. Revelation 16:12 calls it the “kings of the east,” which shows it to be a confederacy of Asian countries. Other scriptures tell which specific countries will contribute soldiers to it. And others still reveal that the confederacy will have one lead country—and one individual man at the helm.

A prophecy in Ezekiel 38 lays out some of these details. “‘Son of man, set thy face unto Gog, of the land of Magog, prince of Rosh, Meshech, and Tubal, and prophesy concerning him” (Ezekiel 38:1-2; Young’s Literal Translation). Meshech and Tubal are ancient names for the Russian cities of Moscow and Tobolsk. Rosh indicates an ancient name of Russia, once called Rus. Many encyclopedias and commentaries (such as the Jamieson, Fausset and Brown Commentary) recognize this.

The passage goes on to discuss the conquests of the mighty army led by this “prince of Rosh, Meshech, and Tubal.” It also discusses the army’s eventual defeat. So who is this mighty prince?

A study of the above scripture, placed alongside other Bible passages, and viewed in the context of current events in Russia, makes the answer clear. Here is what editor in chief Gerald Flurry wrote in the September 2014 issue of the Trumpet:

His track record, his nationality and his ideology show that he is fulfilling a linchpin Bible prophecy. The time frame of his rule also shows that nobody else could be fulfilling the Ezekiel 38 and 39 prophecy. … I believe he is almost certain to be the “prince of Rosh” whom God inspired Ezekiel to write about 2,500 years ago!

Since the Trumpet has this vital understanding of Vladimir Putin’s role in end-time prophecy, we disagree with those who believe he won’t endure the current protests. Part of this prophecy is already fulfilled, and it seems likely that Putin will survive to fulfill the rest of it.