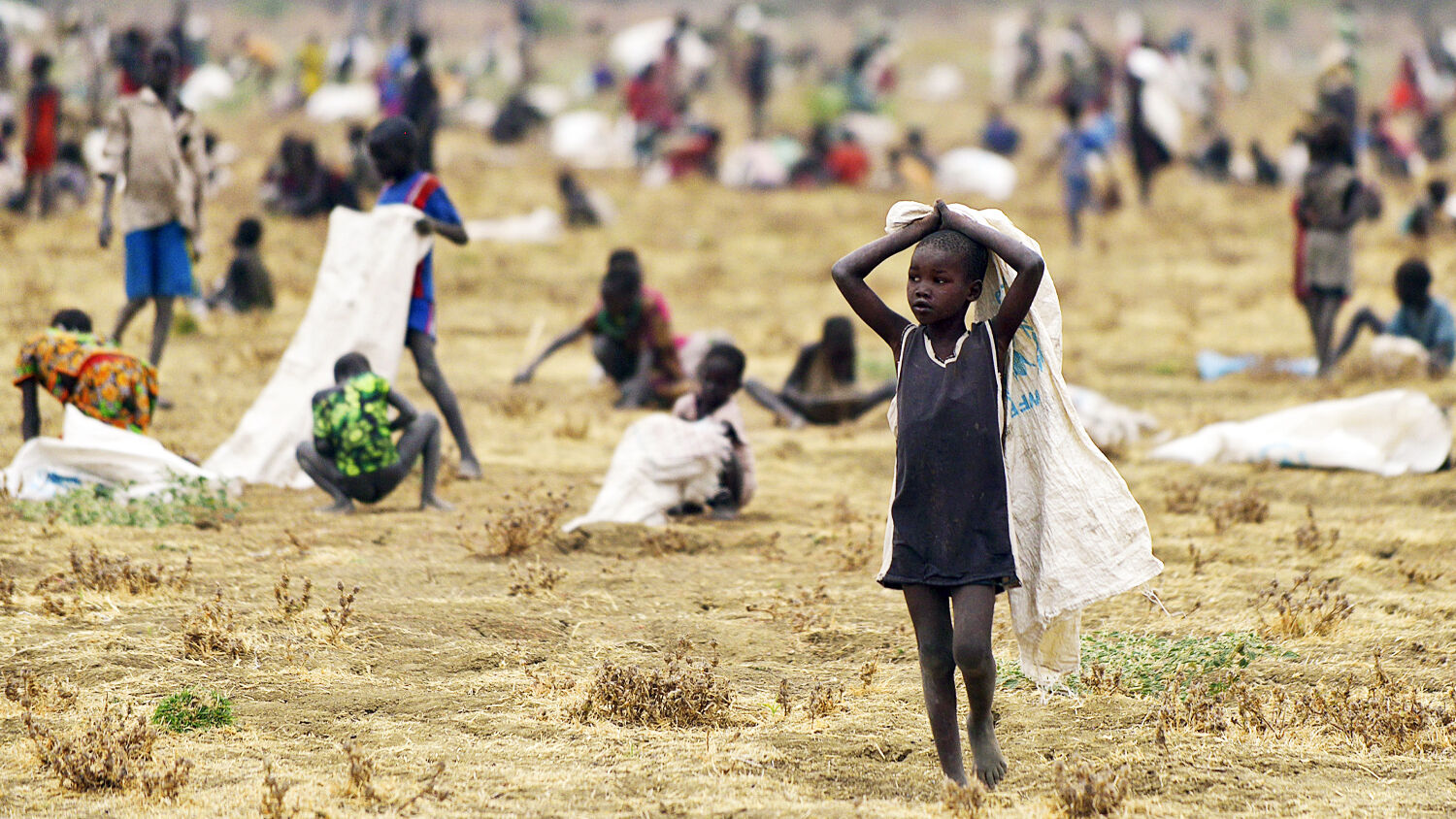 Children flock to a field demarcated for food drops at a village in Nyal, South Sudan.
TONY KARUMBA/AFP/Getty Images

The black horseman is not finished riding.

The head of the United Nations World Food Program warned in statements published November 14 that the world could face “famines of biblical proportions in 2021.”

In an interview with the Associated Press, David Beasley said, “It’s getting worse out there” and the World Food Program’s “hardest work is yet to come.”

Last April, Beasley warned the UN Security Council that as the world faced covid-19, it was also “on the brink of a hunger pandemic” that could quickly lead to “multiple famines.” Beasley said the crisis was mostly averted this year “because the world leaders responded with money, stimulus packages, deferral of debt.”

But with covid-19 surging again, economies are continuing to falter—especially in low- and middle-income nations—and ongoing lockdowns are expected to prologue the stifling of markets. Beasley said the funds that were available this year to prevent famine will not be available in 2021. He added: “[T]his tragedy that we are facing—crises that really are going to be extraordinary over the next, who knows, 12 to 18 months.”

UN warns of “famines of biblical proportions” within the next year https://t.co/XqJ7v7lKlz pic.twitter.com/53bZ8RIVTV

The number of people at risk of starvation is approaching 270 million. Comparing the approaching crisis to the Titanic’s situation, Beasley said, “Right now, we really need to focus on icebergs, and icebergs are famine, starvation, destabilization and migration.” Otherwise, he said, the world will suffer “famines of biblical proportions in 2021.”

The Bible records the history of several notable famines. The first, mentioned in Genesis 12, was so severe it compelled the patriarch Abraham to flee to Egypt. Another recorded in Genesis 26, occurred during the lifetime of Abraham’s son Isaac and prompted him to take refuge in Gerar. Genesis 41 through 44 records a particularly grievous famine that struck Egypt while Isaac’s grandson Joseph dwelled there; it lasted for seven agonizing years. 1 Chronicles 21 discusses a bout of disease and famine that resulted in the death of 70,000 people. And the list goes on.

But the Bible also says that the worst famines are yet to come.

In Revelation 6, the Apostle John discusses “the seven seals” that lead to the dramatic end of the age of man attempting to rule over himself. The first four of these, discussed in verses 1-8, are often called the “four horsemen of the apocalypse.” They represent religious deception, war, famine and pestilence.

Regarding the third horse and its rider, John writes: “And when he had opened the third seal, I heard the third beast say, Come and see. And I beheld, and lo a black horse; and he that sat on him had a pair of balances in his hand. And I heard a voice in the midst of the four beasts say, A measure of wheat for a penny, and three measures of barley for a penny; and see thou hurt not the oil and the wine” (verses 5-6).

This is a personification of mass famine, severe and relentless, that will afflict billions around the world. The passage makes clear that this will be a time when scarcity of food is so great that staple grains are meticulously weighed and prohibitively expensive.

Ellicott’s Commentary says “measure” in verse 6 means “the amount of food sufficient to support a man for a day.” And “penny” refers to “the usual daily pay of the laborer and of the soldier.” This means an entire day’s wage would allow a man to buy only enough wheat to feed himself for that same day. Or he could buy enough of the less nutritious barley to feed three, making the feeding of a family almost impossible. Meanwhile, luxury items such as oil and wine remain in supply, but well out of reach of working-class people.

Revelation is not the only biblical book to discuss an end-time return of famine. During His ministry on Earth, Jesus Christ said that mass famines would unfold prior to His return: “For nation shall rise against nation, and kingdom against kingdom: and there shall be famines …” (Matthew 24:7; see also Mark 13:8 and Luke 21:11).

Trumpet editor in chief Gerald Flurry and coauthor Wayne Turgeon write about the approaching return of famine in their booklet The Four Horsemen of the Apocalypse, stressing that these prophecies are for the present age. “We are not discussing some dusty old prophecies,” they write. “These are dramatic, dire prophecies that lie directly in front of us! … This great famine will eventually spread to every corner of the Earth before mankind repents in unconditional surrender to God ….”

Earlier they write: “[T]his third horseman of famine will have a specific fulfillment. It is ready to gallop into our immediate future with an impact far beyond the historic and present-day occurrences of localized famines.”

Mr. Flurry and Mr. Turgeon explain that although this points to a future of terrible human suffering, the Bible makes clear that God will provide an escape for those who will embrace Him. “The future appears very bleak,” they write. “But there is a way of escape (Revelation 12:13-17). God will hear and forgive anyone who will repent. The only ones promised divine protection are those few who have yielded to God and His way of life.”

The Scriptures reveal that David Beasley and others with the World Food Program are right to be concerned about a return of “famines of biblical proportions.” In fact, they may well be discussing the very same future famines that the Scriptures warn about. It is clear that the black horseman is not finished riding. But as Mr. Flurry and Mr. Turgeon write, each individual has some say about whether he or she will be in his path—or not.