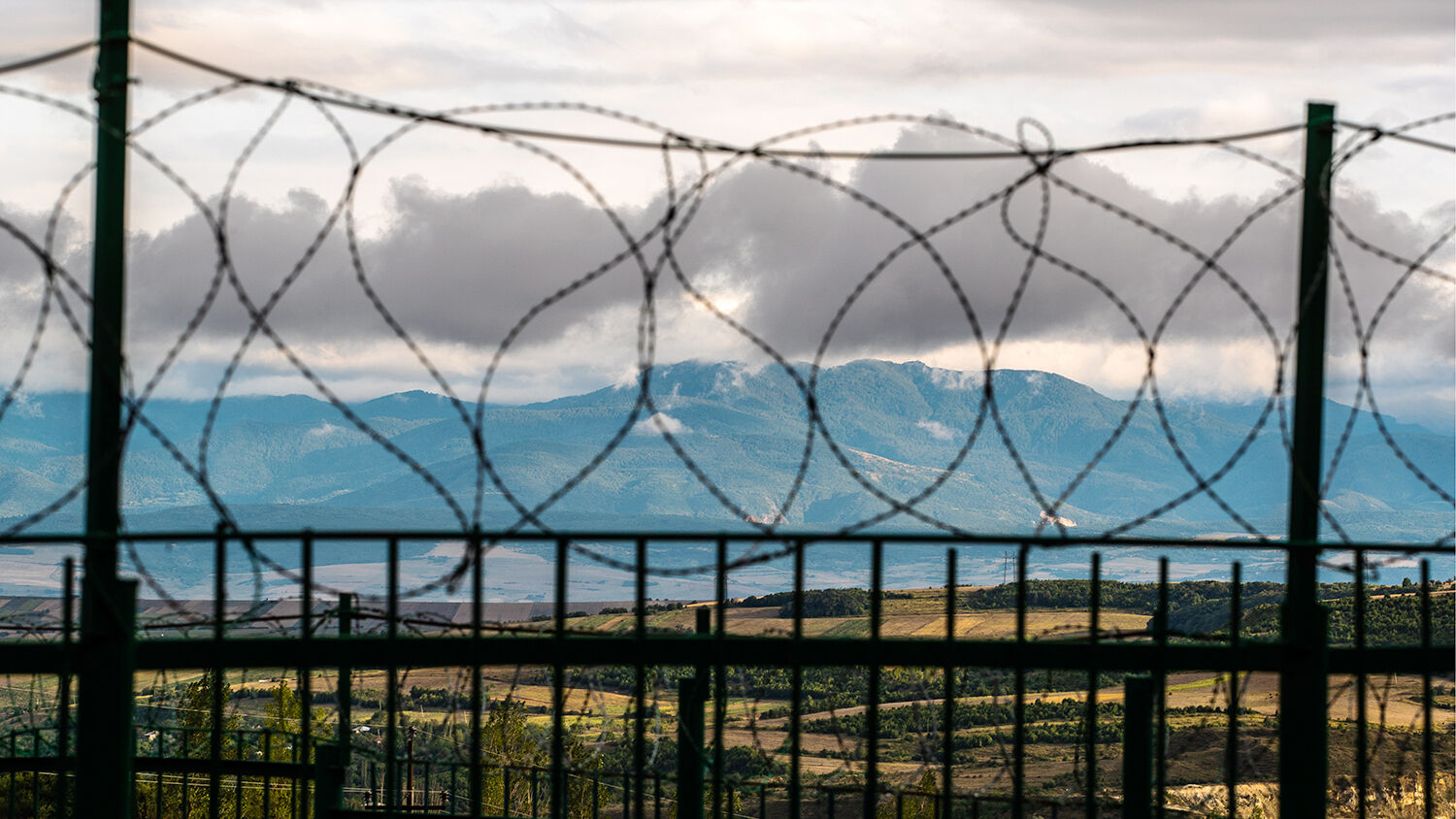 Putin’s quest to reconstruct the Soviet Empire continues, sometimes just a few acres at a time.

At the start of August, the village of Gugutiantkari was inside the free Republic of Georgia. But now, after Russian forces quietly and unlawfully relocated their razor-wire border fences, the village is in Russian-occupied South Ossetia.

Gugutiantkari and its people are the latest victims of Russian President Vladimir Putin’s “creeping occupation” of Georgia, as his forces gradually push deeper into the former Soviet nation and return more and more of it to Russia’s control.

The occupation began 11 years ago this month when Russia invaded Georgia and asserted control over a fifth of its territory, in the regions of South Ossetia and Abkhazia. A few years prior to this invasion, Putin called the collapse of the Soviet Union—which freed Georgia, Ukraine and 12 other republics from Russian rule—the “greatest catastrophe” of the 20th century. The invasion and occupation of Georgia was partly Putin’s attempt to reverse one aspect of that “catastrophe.”

But Putin didn’t stop with the fifth of Georgia that he took in 2008. Since first erecting miles of fencing around these two regions and making them de facto territories of Russia, his forces have engaged in at least 57 instances of “borderization,” moving the fences ever deeper into the region still under Georgian control.

“They keep putting up the fences, and there is nothing we can do,” Gugutiantkari resident Liziko Gakheladze said in an August 14 interview with Rustavi 2.

After fences pop up around their homes, farms and orchards, Georgians are faced with a loathsome choice: Either flee the properties that their families have developed for generations, or be caged inside Russian-controlled territory and subjected to harassment and possible arrest. Gakheladze said, “People are leaving because … we can’t even go out to our own gardens as they [the Russians] are there.”

Tbilisi-based analyst Irakli Bokuchava told the Trumpet on August 22 that these quiet attacks on Georgia’s territorial integrity will continue unless and until Georgia can militarily stand up to Russia—an unlikely prospect given the vast discrepancies between their militaries and the reluctance of Georgia’s partners to come to its aid.

When Russia first invaded Georgia, Trumpet editor in chief Gerald Flurry said the move marked the historic “beginning of a dangerous new era.” Now 11 years on, as Russia continues its slow-motion occupation, placing more and more of Georgia under Kremlin control, it is clear that Mr. Flurry’s forecast was accurate. He also said the dangers of the “new era” would go beyond Georgia’s borders. In our October 2008 issue, he wrote:

Russia’s attack on Georgia … was the first military strike of a rising Asian superpower—and there will be more! … Will a crisis occur over Ukraine? That area is the breadbasket of Russia, and surely it is willing to wage war over that as well.

In the years since, Putin has held eastern Ukraine in a state of frozen conflict that has so far killed 13,000 people. He has also greatly boosted the lethality of Russia’s military and shoved America out of his periphery in Kyrgyzstan. Putin has frequently consorted with China to undermine the international order, has helped North Korea become a more formidable and unpredictable nuclear power, and has propped up Venezuelan dictator Nicolás Maduro as Venezuela bleeds. He is working with Germany to increase both nations’ power over their neighbors, and he is colonizing and militarizing the Arctic. Putin has also positioned Russia as a lead player in the Middle East, helping the murderous Syrian regime hold power and facilitating Iran’s pursuit of nuclear weapons.

Compared to today, the world before that 2008 invasion was reasonably stable. It is clear in retrospect that Russia’s act of aggression in Georgia truly was a landmark event, after which global dangers have significantly multiplied. The invasion indeed marked “the beginning of a dangerous new era.”

This “new era” is causing suffering for numerous people in Russia, Georgia, Ukraine, North Korea, Venezuala and other nations where Putin interferes. But Bible prophecy shows that the Putin era will not last long and it will be followed immediately by a far longer era of peace and prosperity for all peoples of the world.

In his booklet The Prophesied ‘Prince of Russia,’ Mr. Flurry writes that Putin is mentioned personally in ancient Bible prophecies in the book of Ezekiel concerning a “prince of Rosh.” Those Bible passages show that his destabalizing reign occurs at the tail end of the age of mankind attempting to rule himself. And that means righteous godly rule is very near. Mr. Flurry writes:

Vladimir Putin is a sign, literally a sign, that Jesus Christ is about to return! This is one of the most inspiring messages in the Bible. What we are seeing in Russia ultimately leads to the transition from man ruling man to God ruling man! And it is almost here! It is just a few short years away. We need to watch Vladimir Putin closely. I believe he is almost certain to be the “prince of Rosh” whom God inspired Ezekiel to write about 2,500 years ago! We need to watch what is happening in Russia and how Europe responds to it.

To understand the details of Putin’s role in Bible prophecy, and the hope-saturated “sign” that he represents, order your free copy of Mr. Flurry’s booklet The Prophesied ‘Prince of Russia.’