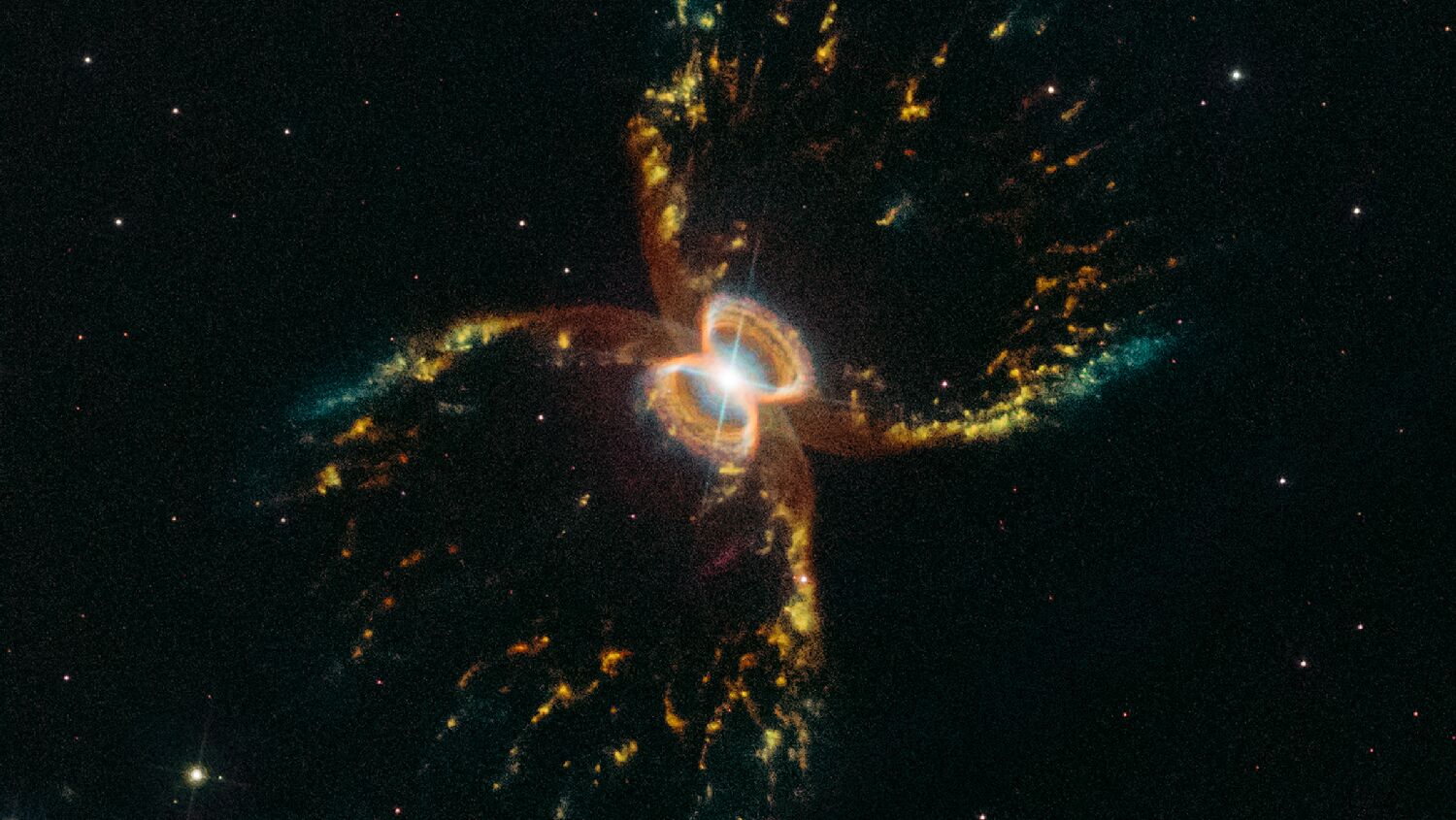 In celebration of the 29th anniversary of the launch of NASA’s Hubble Space Telescope, astronomers captured this festive, colorful look at the tentacled Southern Crab Nebula.
NASA, ESA, and STScI

On this day in 1990, history was changed when the Hubble Space Telescope was placed in orbit.

For decades before this event, astronomers would spend long nights in frosty observatories peering through telescopes and striving to capture clear images of the heavens. But their view was clouded by Earth’s atmosphere.

“The Earth’s atmosphere is a fluid, chaotic soup of gas and dust,” nasa states. “It blurs visible light, causing stars to twinkle and making it difficult to see faint stars. It hinders or even totally absorbs other wavelengths of light, making observations of such wavelength ranges as infrared, ultraviolet, gamma rays and X-rays difficult or virtually impossible.”

As early as the 1920s, scientists realized that in order to see the cosmos clearly, they would have to place a telescope in space, above the distortion and turbulence of Earth’s atmosphere. But for decades, this was only a starry-eyed pipe dream.

In his book The Universe in a Mirror, Robert Zimmerman explains the remarkable 50-year struggle that scientists waged to turn that dream into a reality with the Hubble project. “Conceived in the 1940s and 1950s, its gestation was long and difficult, blocked by naysayers and doubtful scientists who feared its cost,” he writes. “Designed in the 1960s, its birth was long and difficult as engineers, astronomers and bureaucrats fought over its design. Built in the 1970s and 1980s, its childhood was at first crippled, as a fundamental error in construction left its mirror defective.”

But those decades of struggle culminated in one of mankind’s greatest scientific accomplishments. Zimmerman continues: “Fixed and maintained in the 1990s by high-flying astronauts who loved it as much as if not more than the scientists who used it, Hubble lifted a curtain from our view of the universe, changing it so profoundly that no human can look at the stars in the same way again.”

Since the launch of Hubble on April 24, 1990, and its release into orbit the following day, the telescope has made some 1.4 million observations of almost 45,000 celestial objects. It has truly changed the way we look at the stars. “Hubble, and the men and women behind it, opened a rare window into the universe,” Zimmerman writes, “dazzling humanity with sights never before seen.”

Trumpet editor in chief Gerald Flurry has explained that “the rare window” Hubble opens is not just relevant to scientists and people who are curious about astronomy, but that it has the deepest of possible implications for all mankind. In the March 6, 2009 episode of The Key of David, he said: “Before the Hubble Telescope, astronomers had looked out into the universe and saw a lot of empty spaces out there. But after the Hubble Telescope they saw that those empty spaces were not really empty spaces, but they were clusters of galaxies, each one having 1 billion stars.” The spaces that have been filled in by Hubble’s view “has everything to do with your incredible human potential,” he said.

In a commencement address at Herbert W. Armstrong College on May 17, 2009, Mr. Flurry spoke on this topic again, and said: “It seems to me there ought to be a lot more mention of the Bible in that Hubble project. … The Bible has a lot to say about that project, in an indirect way.”

Trumpet managing editor Joel Hilliker discusses Hubble’s connection to the Bible and its importance for mankind in his booklet Our Awesome Universe Potential. He writes:

These dazzling images inspire some penetrating questions. Where does it end? Where did it all come from? Is there any meaning behind it all? Why is it here? Why, for that matter, am I here?

These are precisely the kinds of questions King David asked when he looked up at the night sky, though he would have been viewing it only with the naked eye (Psalm 8). And these are the kinds of questions that we should ask when we take time to study the incomparably richer view of those same cosmos that the Hubble Space Telescope gives us.

And the Bible gives answers to them!

Hebrews 2:6-10 say God will put “the universe in subjection” to humankind (Weymouth version).

Isaiah 45:18 says the God who created the earth and the heavens “created it not in vain” and “formed it to be inhabited.”

Romans 8:22-23 say the “whole creation”— not just the Earth, but everything Hubble can see and everything beyond its view—“has been groaning in travail together until now,” waiting “for [the birth] as sons” (Revised Standard Version).

This is about the future, when human beings will be born into God’s Family! Once born as God beings, we will be sent out into the universe to inhabit and develop it. Romans 8 personifies the creation as being eager for mankind to achieve that staggering potential!

“We need to really awaken ourselves to our potential,” Mr. Flurry said on May 17, 2009. “And I tell you it is something to really and truly get stirred up about and to fill a human being with joy. Real joy, and so much so that they want to live by every word of God!”

To understand why we should deeply appreciate the decades of struggle that made the Hubble Space Telescope a reality, and to understand more about the profound meaning of these scriptures and the “real joy” that comes from understanding mankind’s stunning future, watch Mr. Flurry’s Key of David episode and read Mr. Hilliker’s booklet Our Awesome Universe Potential.