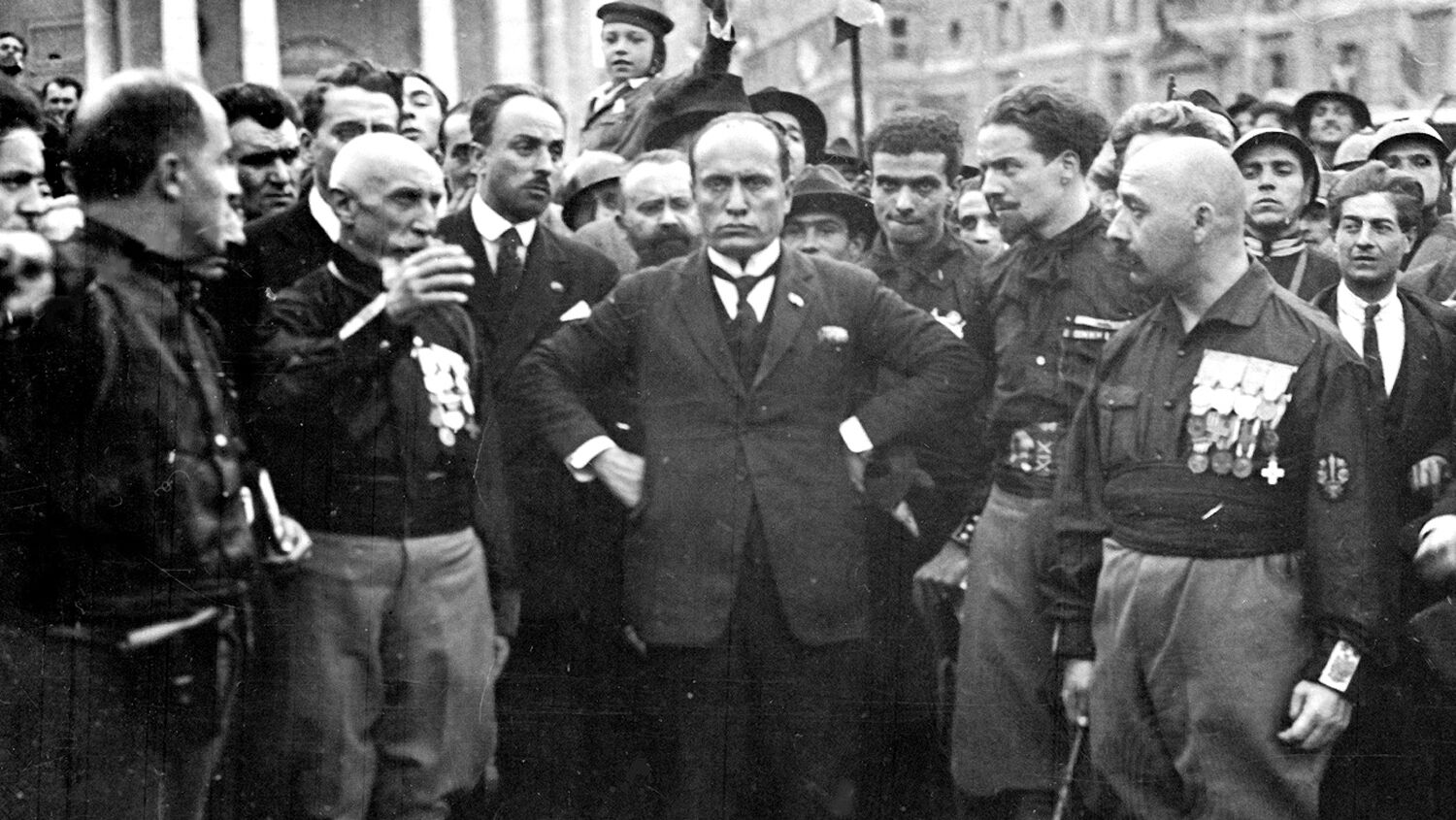 Joe Biden called Donald Trump and his supporters “semi-fascist” on August 25. Using the term “fascist” to attack your opponents is nothing new. In 1946, George Orwell famously complained, “The word ‘fascism’ has now no meaning except in so far as it signifies ‘something not desirable.’” But these accusations of fascism mask the rise of real, literal fascism taking place right now. This fascism has a direct connection with the political party founded by Benito Mussolini. In fact, Italy’s next leader will probably come from the successor to Mussolini’s party.

There’s a danger here that no one in America is warning about. The Democrats are helping cover up the rise of real fascism with their false accusations. The right is embracing these leaders as allies in the fight against the radical left.

But what is rising in Europe will prove to be a threat to America—and the world.

All the polls indicate that Giorgia Meloni, leader of the Brothers of Italy party, will be Italy’s next prime minister after the election on September 25. To many pundits, the only question is whether her coalition will simply win, or win big enough to have a two-thirds majority in Parliament and be able to change the Constitution.

The first leader, Giorgio Almirante, served as chief of cabinet of the minister of culture in the Nazi puppet state. Generally, the senior leaders under Mussolini faded into the background, while the more mid-level politicians ran the new movement.

In the mid-1990s, the movement rebranded, changing its name to the National Alliance. In 2009, the National Alliance merged into the Party of Freedom. Former Alliance politician Gianfranco Fini was rewarded by becoming the deputy prime minister—a high office for a man who once called Mussolini “the greatest statesman of the century.”

But for many National Alliance members, the Party of Freedom was not radical enough, and in 2013, many of these split off to form the Brothers of Italy.

At times, Giorgia Meloni works hard to play down this connection with fascism and the Italian Social Movement. But in 2020, she praised Almirante as a “patriot” and extolled his “unconditional love for Italy, his honesty, his coherence, his courage.”

Mussolini’s great-grandson Caio Giulio Cesare Mussolini has run for office with the Brothers of Italy. The party took advantage of the family connection by making posters of the Italian flag with “Mussolini” emblazoned across them. “The strength of Mussolini’s rhetoric, drawing heavily on the old glory of the Roman Empire, still has not lost political currency,” wrote the Associated Press at the time. Caio Mussolini said the pull of Italy’s past remains strong, and “many want to write Mussolini on the ballot.”

In 2019, several mayors held a celebratory dinner on the anniversary of Mussolini’s march on Rome. But the Brothers aren’t alone in claiming Mussolini’s legacy. The Northern League (Lega Nord) is a likely member of the next Italian coalition. Its leader, Matteo Salvini, has also modeled himself after Mussolini, posing in similar ways, using some of the same slogans, speaking from the same locations.

Even world conditions overlap with the rise of Mussolini. “A main theme, and appeal, of the fascist movement in Italy was dissatisfaction with the whole process of parliamentary government and deep scorn for the constant changing of ministries and ministers which seem to run in parallel with policies that failed to raise the standard of living,” writes Martin Gilbert. High inflation and politic paralyses caused public services to break down. Italy has faced many of these conditions for years. Now they’re getting worse.

Italy and all Europe could be poised for a cold winter. Fuel and electricity prices are shooting up. The Italian government has been spending cash rapidly to try and shield its voters from the price rises. The government itself is heavily indebted and can’t afford to do this indefinitely.

Meanwhile, high energy prices have a host of knock-on effects. Yara, the world’s largest fertilizer company, announced it was cutting output of a key fertilizer type by 50 percent. Britain’s largest fertilizer plant has shut down. Two major producers in Poland have “paused” operations. All of this has long-term implications for food prices. Natural gas is used in a lot of chemical manufacturing. High energy costs push everything up.

But economic conditions aren’t the only reason to fear a fascist comeback. The Bible specifically warns us to expect a revival of the same fascist spirit that dominated Europe in the 1930s and 1940s. Understanding what the Bible says on this subject is essential to grasp what is happening in Italy.

Revelation 17 is a pivotal chapter for understanding world history. It begins by describing a great “whore.” In biblical language, a woman represents a religion or church (e.g. Ephesians 5). Revelation 17:4 tells us this woman is “arrayed in purple and scarlet colour, and decked with gold and precious stones and pearls ….” Verse 2 says that “the kings of the earth have committed fornication” with her. She is wealthy and powerful and involves herself with politics and government.

But there’s one empire in particular this woman dominates. Revelation 17 also describes a “beast”—an empire in biblical symbolism. This women rides, or leads, this empire (verse 3).

This beast has seven heads (verse 3), representing “seven kings” (verse 10). Seven distinct empires, or kingdoms, come out of this beast. Verse 10 pinpoints a moment in time where “there are seven kings: five are fallen, and one is, and the other is not yet come ….” These kings reign one after the other—this empire rises and falls seven times. Verse 8 says, “The beast that thou sawest was, and is not; and shall ascend out of the bottomless pit, and go into perdition ….” The empire disappears at times, hiding underground, only to burst once more onto the scene.

This chapter can only be describing the Holy Roman Empire in Europe. It has a close relationship with the Catholic Church. It has disappeared throughout history only to rise again.

Mussolini frequently called his empire the “Roman Empire” or the “Holy Roman Empire.” He modeled his famous salute after Romans. He used the same eagle symbolism. Even the term fascism is a direct reference to the Roman Empire. The name refers to the fasces, a symbol carried in front of Rome’s consuls and later emperors.

But Mussolini also pioneered a revival of the close relationship with the Catholic Church. In 1929, he signed the Lateran Treaty with the Vatican, making Roman Catholicism the only state-recognized religion in Italy. We write in The Holy Roman Empire in Prophecy:

Just days after Mussolini signed the Lateran Treaty in February 1929, Adolf Hitler praised the agreement in an article in Völkischer Beobachter, the newspaper of the Nationalist Socialist German Workers’ Party. Hitler held no political office at this time, but subsequent events reveal that he was already anticipating the day when he would become a sort of German Mussolini, with the power to negotiate his own concordat with the Vatican.

Hitler went on to forge his own agreement with the Catholic Church. Archbishop Eugenio Pacelli was instrumental in Hitler’s rise, endorsing the Nationalist-Nazi-Catholic coalition that made Hitler chancellor. He directed the German Catholic Center to vote for the Enabling Act that made Hitler a dictator. The day after the Enabling Act was signed into law, Hitler’s envoy traveled to Rome to begin work on his own official treaty with the Catholic Church.

Giorgia Meloni would support a similar relationship with the Catholic Church. In a speech to the National Conservatism convention in 2020, she said:

John Paul ii, the “Patriot Pope,” knew perfectly well that nations, and the fact of belonging to a people sharing the same historical memory, were the bedrock of the freedom of every man. He never tired of repeating that “there is no Europe without Christianity,” a teaching which is more topical than ever today, when the Christian identity of Europe is under attack by a distorted secularism that even attacks the symbols of the Christian tradition, while throwing open the gates to the most intransigent form of Islam that wants to apply Sharia law in our European homelands, and which lies at the heart of the Islamic terrorism that has caused bloodshed in Europe and the United States.

Hitler went on to become the leader of the sixth resurrection of the Holy Roman Empire. But in many ways, Mussolini scouted out his path to power. Could we see a similar dynamic, where Italy paves the way for the rise of the seventh resurrection?

Regardless, the Bible warns us to beware this Holy Roman Empire’s return. Revelation 17:8 is a direct warning that the empire we saw in Europe in World War ii is coming back. In his booklet Prophecy Again, Trumpet editor in chief Gerald Flurry writes: “During World War ii, we saw the Hitler-Mussolini axis, but then it disappeared from the scene. It ‘was not’! And yet, God says, ‘it is’! The Axis powers lost the war, but as Mr. Armstrong preached time and again, they just went underground—into ‘the bottomless pit’ (verse 8). They’re still there—they’re just underground.”

Here at the Trumpet, we’ve focused on Nazi leaders going underground. But the prophecy includes all leaders of the Holy Roman Empire, both parts of the Axis. Many Nazi leaders hid underground by going into the business world. Now they’re rising back up. German businesses have played a huge role in tying Germany to Russia, breaking with America.

In Italy, many of these leaders went underground in the Italian Social Movement, which is now rising in the form of the Brothers of Italy.

The beast prophesied in the Bible is rising before your eyes.

Meloni does a great job of sounding reasonable. While her party demonstrates support for Mussolini, Meloni says she’s not fascist. She quotes today’s best conservative political thinkers—and in a “woke” and secular world, her defense of Christianity and family values is refreshing. In recent years she’s developed into a confident and powerful speaker even in English.

The Bible tells us we have to watch this power—not just because it will usher in tremendous destruction all over the Earth. This power plays a key role in end-time events. By watching it, we not only see the danger but also can watch God’s plan unfold to its inspiring conclusion.

To really understand what is rising in Italy and Europe, you need to read our free book The Holy Roman Empire in Prophecy.