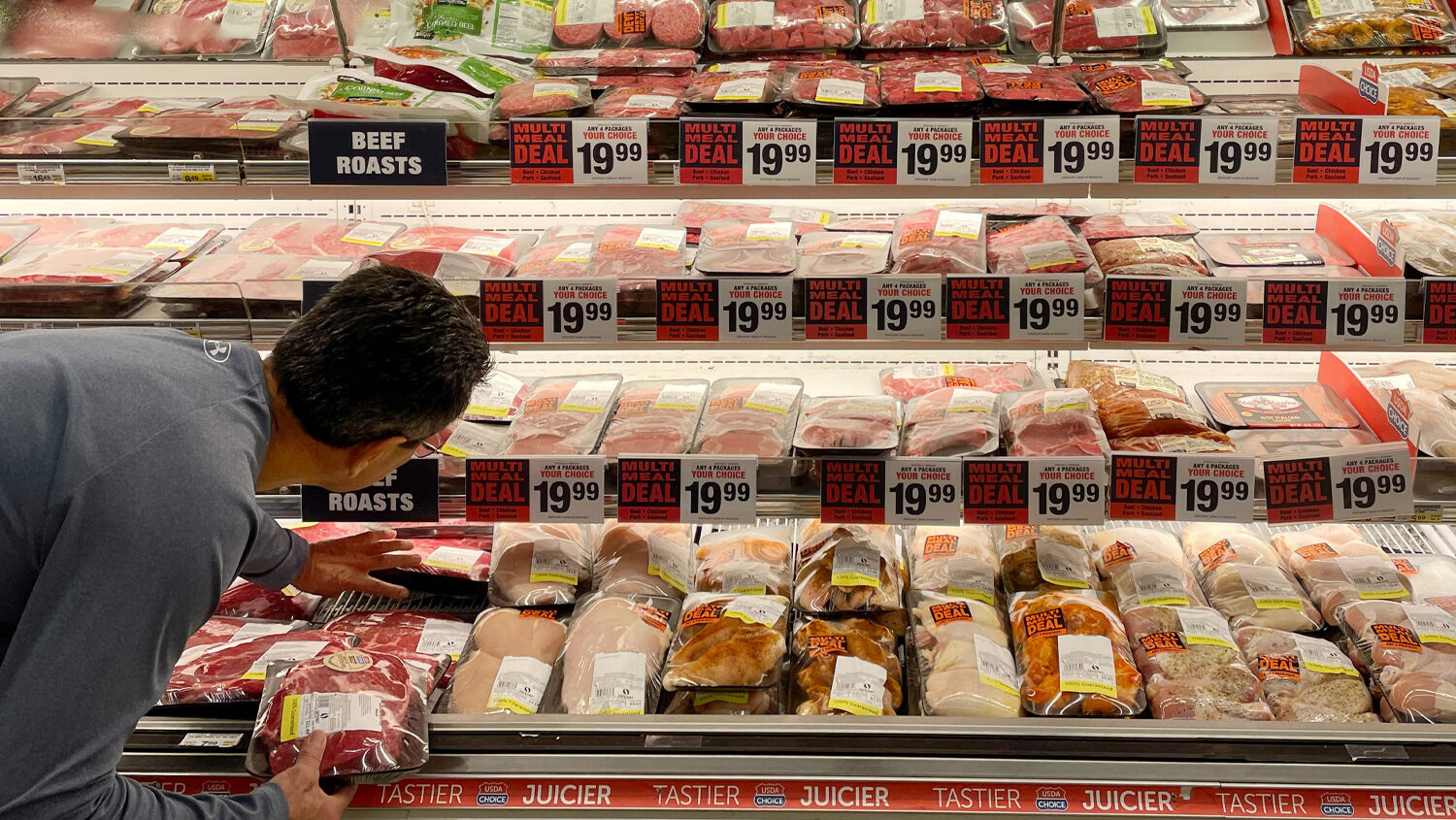 A man selects meat at a Safeway grocery store in Annapolis, Maryland, on May 16, as Americans brace for summer sticker shock as inflation continues to grow.
JIM WATSON/AFP via Getty Images

Inflation is painful. Suddenly we’re all paying more for fuel, electricity, food and almost everything else.

Inflation also has geopolitical implications. They’re not as immediately painful, so can be easy to ignore. But in the long term, these can come around and bite us too.

Germany is perhaps more sensitive to inflation than any other country. The country has experienced hyperinflation. Germans know it can wipe out the wealth of millions and help usher in dramatic political changes.

Inflation in the eurozone is at 7.5 percent, according to the latest data from last month. The United States Federal Reserve and the Bank of England are both moving to confront inflation by raising interest rates. Whether that’s the right move, or if they’re doing enough, remains to be seen. But from Germany’s point of view, at least they’re doing something.

The European Central Bank (ecb) is not. Its deposit rate is still at –0.5 percent, which means if you want to deposit money with ecb, you have to pay for the privilege.

The ecb is also still printing money and propping up government debt by buying government bonds. This money printing slowed in March, but the central bank has no plans to end it until the autumn.

Germany wants much tougher action. Isabel Schnabel, the German member of the ecb’s executive board, is demanding urgent action, ending the bond purchases almost immediately and following it up with a rise in interest rates in July.

Others on the board agree, and she could get her way. But there’s another potential problem: Many countries in southern Europe need the ecb to print money for them to stay afloat financially.

Europe had a debt crisis in 2008. You would have thought that since then countries would have learned their lesson and cut back on their borrowing to ensure nothing like that could happen again.

Germany did. In 2011, government debt was 80 percent of its annual economic output, or gross domestic product. In 2019, it was just 60 percent.

Over the last two years, the ecb has purchased 140 percent of all debt issued by the Italian government. In other words, all the money borrowed by Italy, for the whole year, came from the ecb. And the ecb bought extra bonds, beyond what the government borrowed that year.

Will anyone want to lend Italy money if the ecb isn’t standing there ready to buy it up? Italy will need to borrow another €80 billion (us$83.4 billion) this year, so it’s hoping so.

Economic problems created by geopolitical events, as well as the Biden administration’s handling of the U.S. economy, have quickly put Europe in an impossible situation.

Stick with low interest rates and money printing, and the ecb risks a German revolt, as German savers guard their savings from the specter of hyperinflation. Such a policy could fuel political unrest and push Germany, and all of Europe, in a radically new direction. But confront the problem and the ecb sends southern Europe into bankruptcy.

It remains to be seen if the current problems are long or deep enough to force Europe into this kind of dilemma. But it’s clear that the problems exposed in the 2008 euro crisis have not been solved. If anything, they’re worse.

In 1984, Herbert W. Armstrong wrote that an economic crisis beginning in America “could suddenly result in triggering European nations to unite as a new world power larger than either the Soviet Union or the U.S.”

Once again, we can see that potential clearly. America’s debt is massive. Sooner or later, the U.S. dollar and economy will blow up. And when they do, it will cause massive problems for Europe.

Europe, with its separate governments, separate economic policies and very different economic needs, yet at the same time sharing a currency and a central bank, is not working. That kind of crisis will cause the EU to finally confront that reality. Some countries will likely quit the euro. Others will come together in a kind of European superstate. Either way, all will leave this unstable, half-union.

Trumpet editor in chief Gerald Flurry wrote, “I think it is the greatest personal prophecy [Mr. Armstrong] ever made because it is being fulfilled today exactly as he described it.”

“Have we so quickly forgotten how close we came to economic disaster in 2008?” he continued. “Mr. Armstrong saw this crisis looming in 1984. The steps that were taken to avert it in 2008 solved nothing—they only delayed it for a short time. There is going to be another financial meltdown—far more catastrophic. It will strike perhaps within the next year or two. Herbert W. Armstrong warned that a massive financial crisis centered in America would ripple across the world and spark the rise of the seventh and final resurrection of the Holy Roman Empire. We are seeing that develop right now.”

The basis of this prophecy is in Revelation 17, which forecasts the rise of a “beast” power, or empire. This power has continually risen before and is led by a woman, or church in biblical symbolism. This can only be referring to a European power. This power is a union of “ten kings” (verse 12) who shall “have one mind, and shall give their power and strength unto the beast” (verse 13).

“What will cause these nations to unite so forcefully?” asked Mr. Flurry. “It is very difficult to unite nations into ‘one mind’! That’s an incredibly challenging undertaking. … Mr. Armstrong had profound insight in specifically forecasting that the catalyst for this dramatic unification would be a massive financial crisis that starts in America and ripples out from there. Look at conditions in America and the world today, and it is not difficult to see just how right he was!”

He concluded: “Watch the economic situation in America closely, and its effect on Europe—and see if this dramatic prophecy from Mr. Armstrong doesn’t come to pass just as he said it would!”

That is why, even though these economic problems may be personally painful, we need to watch their ramifications on Europe. Not only will it lead to some dramatic news, but it also points you back to the Bible and to God. It’s a reminder that the economic situation may be painful, but it is all part of God’s plan for world events.

If you would like to know more about that plan, our free book The United States and Britain in Prophecy is a great place to start.