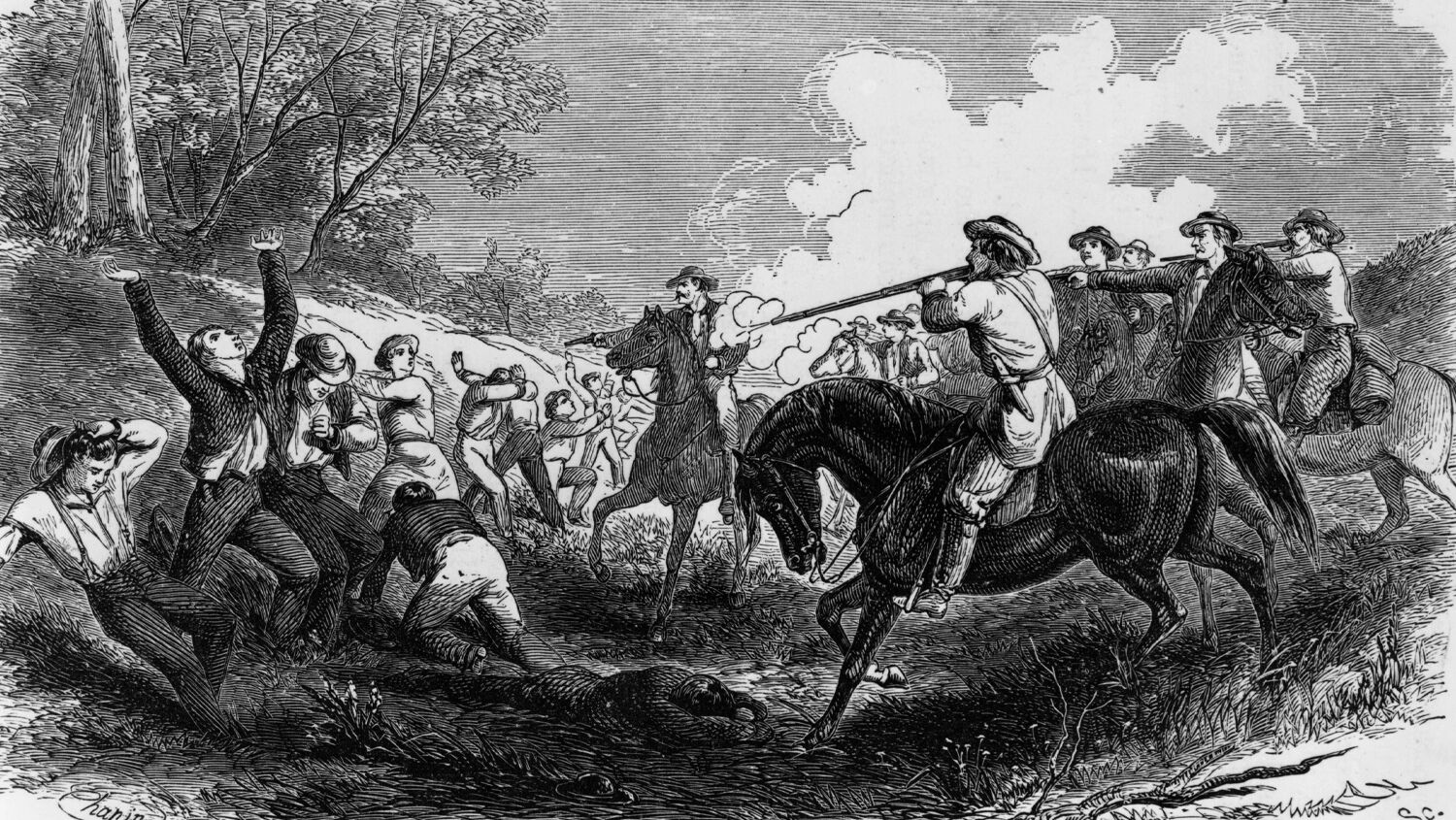 Voter fraud has a long history in the United States. Ominously, much of that history traces back to civil war.

In the vote for the Kansas Territory’s first legislature in 1855, 6,307 people voted, even though the territory had only 2,905 legal voters. Thousands had poured across the border from Missouri to vote in an attempt to make sure Kansas joined the union as a slave state, which would help perpetuate slavery nationwide. Missouri Senator David Atchison led the effort. One of his lieutenants told a crowd to “mark every scoundrel among you that is the least tainted with free-socialism or abolitionism, and exterminate him.” Missourians must vote, he said “at the point of a Bowie knife or revolver.”

The pro-slavery side basically got away with election theft. So they kept at it. In 1857, Kansas voted for a new territorial legislature. One district of just 130 legal voters somehow returned 2,900 ballots.

Right now, a lot of people are parsing this or that detail of this or that alleged fraud in this or that state. But too few are considering the ultimate consequence of a massive attempt to steal an election: outright civil war.

A country can stay together because its citizens believe that what unites them is greater than what divides them. One man may be a Republican, another a Democrat, but they can keep America together if the fact that they are both American is more important than the political divide.

This restrains what could be an all-out war for power. The two may compete politically, but greater loyalty keeps that competition within the bounds of the law.

If powerful people are willing to take away the most fundamental right of a citizen, it is a symptom that this greater loyalty has broken down.

“Bleeding Kansas” was an infamous step toward civil war. Massive electoral fraud descended into violence and terrible bloodshed between the rival factions. Those who were willing to break laws against voter fraud were willing to break laws against intimidation, theft, violence and murder. This sentiment existed across enough of the country that one side decided it had so little in common with the other that they fought to break away.

Yet civil war isn’t the only threat. Dissolving national loyalties also make a nation much weaker in facing external threats. It kills national will.

This disease infected France in the late 1930s. Many on the right detested far-left Prime Minister Leon Blum so much that they rallied to the cry “better Hitler than Blum.” No wonder France did not put up much of a fight. Many hated their rival political party more than they hated the enemy. Meanwhile those on the left were more concerned with the international success of communism than with the success of their own state. France failed to take the tough measures needed to stand up to Hitler in the 1930s, and when he attacked in 1940, it quickly collapsed.

For much of America’s history, a certain amount of voter fraud was considered normal. The infamous Tammany Hall political machine of the Democratic Party in New York City got away with more than 100 years, for example. But when fraud expands out of “normal” bounds, it’s a good sign of trouble. Restraints that once held people back aren’t working anymore.

Abraham Lincoln said that the answer to division is respect for law. In his Lyceum Address, which he gave when he was 28, he said: “Let reverence for the laws be breathed by every American mother to the lisping babe that prattles on her lap; let it be taught in schools, in seminaries, and in colleges; let it be written in primers, spelling books and in almanacs; let it be preached from the pulpit, proclaimed in legislative halls, and enforced in courts of justice.”

The rule of law can restrain violent division. But massive voter fraud reveals that this restraint no longer exists.

What replaces the rule of law? Armed Antifa thugs on the streets of American cities. Activist judges who use the language of law to render judgments according to their will of what the outcome will be and not what the law actually says.

In 2001, Trumpet editor in chief Gerald Flurry published No Freedom Without Law. Discussing America’s divisions, he wrote, “A big part of the answer is getting back to the Constitution and law.”

The solution to America’s problem involves unity. But unity cannot be the goal of itself. This was part of Lincoln’s great insight. Other politicians had sought unity as their number one goal. But the result was a series of compromises with slavery, which only pushed the problem off and made it worse.

In Lincoln’s day, one side was right, and one side was wrong. That’s not to say that everyone fighting for the South was evil or had evil motives. But those who sought unity as an end in itself ended up compromising with the wrong—and nothing good ever came of it. Lincoln strove for unity based on the law as a way to achieve unity based on what was right.

That is what is necessary today. The Bible has many prophecies warning about division. And the solution revolves around getting back to law.

I’ve been rereading No Freedom Without Law, and so much of what Mr. Flurry wrote 20 years ago has proved prescient. He discussed the Bush v. Gore court case—an attempt to steal the 2000 American presidential election. He warned:

The attempt was made and it almost succeeded. That shows how lawless our people have become. This portends a nightmare future—unless we heed God’s message.

Once our political system falls apart, nobody will be able to put it back together again.

How horrifying that we cannot see the coming mega-disaster! The outcome could be changed by heeding God’s message.

That could have seemed far-fetched in 2001. Now we have several major news organizations publishing articles warning that we could be heading for another civil war.

This booklet gives the practical solution to this division: Obey the rule of law. Chapters 2 and 3 especially are relevant to the situation we face today. As an individual, you may be powerless to stop a civil war. But the message of this booklet is so practical that you and I can apply in our individual lives and reap the benefits of it, regardless of what the nation does.

As with all our material, No Freedom Without Law is free; read it online or order your own print copy.