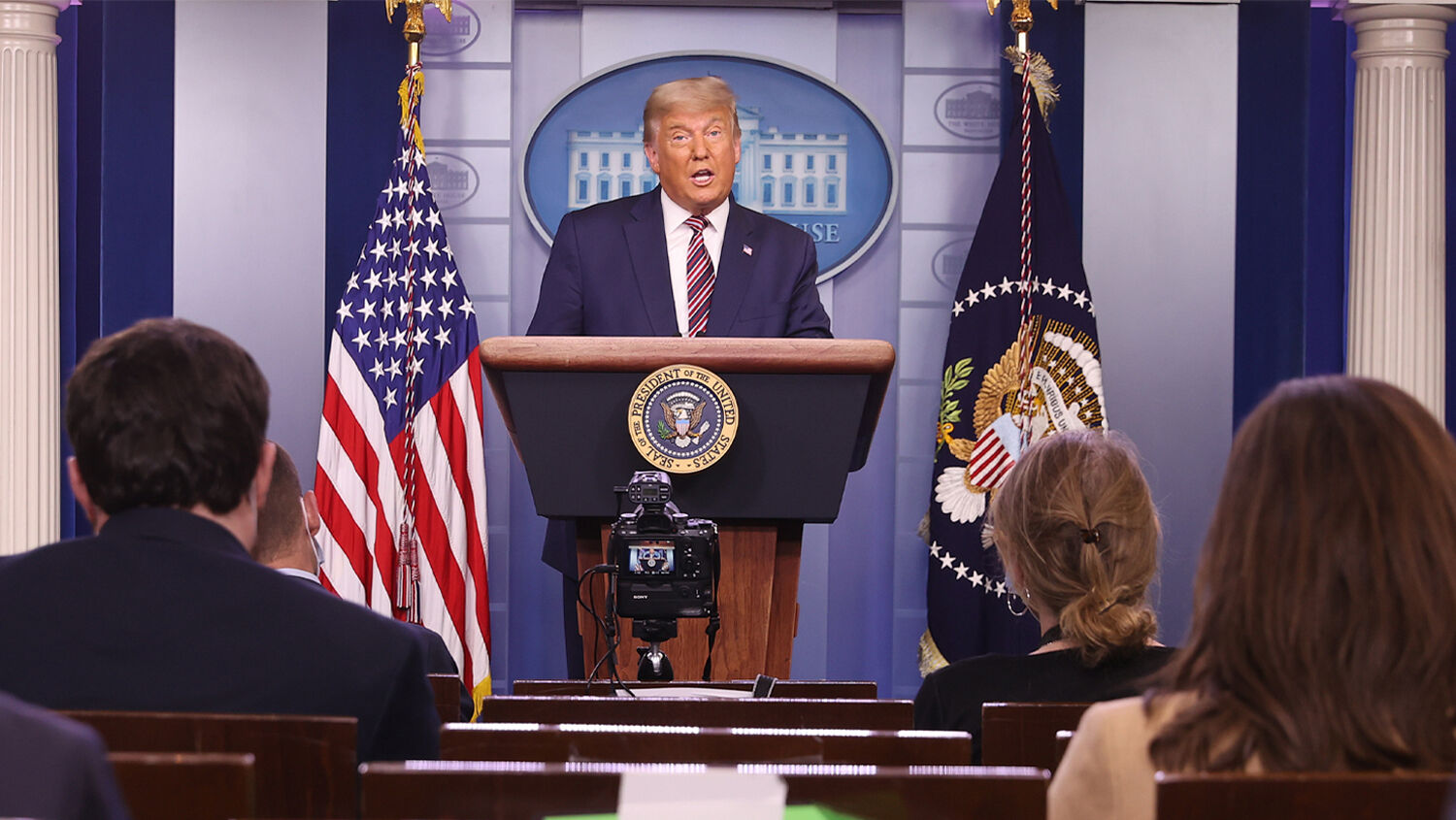 Since the United States’ election, German politicians and media have led the world in denouncing American President Donald Trump.

During the night of the election, they were quick to describe President Trump as an authoritarian dictator. Even more extreme than their colleagues in the American media, the German press quickly claimed that America is no longer the land of the free. Instead, it has its own Robert Mugabe.

The day after the election, both Der Spiegel and Bild—Germany’s largest magazine and largest newspaper—carried stories implying that Mr. Trump was some kind of mentally deranged psychopath. “Psychologist Analyzes the U.S. President: Trump Shows Three Personality Disorders at the Same Time,” declared Der Spiegel. The article promised to discuss “which characteristics make Donald Trump dangerous.” Not to be outdone, Bild quoted a “communications scientist,” explaining that in President Trump’s behavior “the mentality of a dictator reveals itself, not that of a democratic politician.”

As the count began to go Joe Biden’s way, Europe led the world to quickly congratulate the former vice president—lending crucial legitimacy to his claim that he was the undisputed winner.

The standard protocol says that European leaders wait for an official announcement—or for the incumbent to concede defeat. But not this time.

Politico cited an anonymous EU official stating that European leaders deliberately coordinated their congratulatory statements. Once America’s media called the election, Europe’s leaders worked together to rush in, en masse, to bolster that call, by swiftly giving Biden international recognition. The EU Observer wrote it “looked like a coordinated effort to stop outgoing President Donald Trump from challenging the result.”

“European allies who regularly clashed with Trump over defense spending and trade were among some of the first to congratulate President-elect Biden,” noted Foreign Policy. How much did Europe’s fulsome support push other world leaders into sending in their swift congratulations?

Their coverage the morning after the election made very clear what many Europeans, and especially Germany, thought of President Trump. Germany’s Social Democratic leader Saskia Esken said that President Trump’s insistence that the left cheated in the election meant that, “[m]ore than ever, we have to defend our democratic achievements against populist and nationalist agitation.”

Another senior member of the same party, Martin Schulz, said, “We in Europe are one of the last bastions of parliamentary democracy.”

Manfred Weber, a senior member of Germany’s Christian Social Union, wrote that the divisions in America are “a warning for Europe.” Europe fails to learn “our democracies are in danger,” he wrote.

“Democracy in the United States has long been regarded as the great, shining example for many countries around the world,” wrote Spiegel in its post-election coverage. “No longer. That U.S. President Donald Trump would prematurely declare himself the winner of the presidential election and accuse his political opponents of fraud, even though hundreds of thousands of ballots still haven’t been counted, is grotesque, absurd—and anti-democratic.”

It is sad, but it also fits in with the bigger picture: Trump doesn’t care one iota about adhering to the norms that constitute a functioning democracy. Since becoming president, he has piece-by-piece destroyed faith in his country’s democratic institutions. He bad-mouths them, he believes he is surrounded by treachery and he whips his followers into a frenzy. He dismisses anyone who dares not to support him as either a fraud or an enemy of the state.

“People were reacting like the United States had overthrown a dictator,” said nbc’s chief foreign correspondent Richard Engel. “[D]emocracy has been saved.” Yes, Engel is part of America’s radically left media and has his own agenda in making those kinds of statements. But it’s still a reflection of the response from Germany.

During the election night, German leaders insisted that a Trump victory would leave Europe as the only home of freedom and democracy. To carry that burden, they would have to grow strong.

“Should Trump stay in office for another four years, Europe would have to unite,” said Schultz. Dutch Member of European Parliament Sophia in ‘t Veld tweeted, “Whatever the final outcome of #USAElections2020, Europe needs to grow up, and grow up fast.”

Even with Germany confident that Biden has won, this view hasn’t really changed. Over the weekend, Spiegel wrote that “the U.S. has often been the anchor and guiding light of the Western world. However, the United States has renounced that claim to leadership.”

“The old certainty that the U.S. is an ally Germany can count on in times of need, regardless of any differences, no longer exists,” it continued. “As such, Germany and the rest of Europe need to use this next American presidency as a time to prepare for a world in which they themselves exhibit strength. They need to learn to speak with one voice on important foreign policy and to consolidate their power in a common defense policy.”

“Trumpist forces could return to power as soon as four years from now,” it stated. “And this polarized, unpredictable America is likely to be focused on itself and China for some time to come.”

At the same time, they published a separate article, crowing: “In the history of the U.S., no president has ever moved from the White House into prison. But after four years of Trump, that scenario is not completely implausible.”

Contrary to Germany’s insistence that a Biden victory is beyond all possible dispute, the fat lady has yet to sing.

Can you imagine how Germany would respond if (or rather when) President Trump somehow emerges victorious. Once again, he would be the autocrat, the Robert Mugabe; America’s days as a free nation would be over. Europe alone would be entrusted with the sacred task of maintaining the light of freedom. And that task would mean opposing the United States.

It is clear that such a scenario would mean a deep and fundamental breach between a German-led Europe and America.

But in that same scenario, America’s treatment of Europe won’t change much. Sure President Trump has pressured Germany to spend more on its military and to stop drawing close to Russia. And he’s pulled some troops out of Germany. But he’s never really threatened to pull out of nato. He’s fine with America’s nuclear bombs remaining in German hands, ready to fly on German planes.

In this scenario, Germany will be fighting the United States, while the U.S. still trusts Germany.

And that’s a scenario the Bible specifically warns against. As shown in The United States and Britain in Prophecy, by Herbert W. Armstrong, the Bible reveals that Britain and America are modern-day descendants of ancient Israel. And biblical prophecy warns that Israel will trust in lovers—foreign allies—that will destroy it.

“All thy lovers have forgotten thee; they seek thee not,” warns God in Jeremiah 30:14.

“They give gifts to all whores: but thou givest thy gifts to all thy lovers, and hirest them, that they may come unto thee on every side for thy whoredom,” says God in Ezekiel 16:33. Could this apply to any nation better than the modern United States? America has given away some of the most powerful weapons ever created. Despite all the gifts, these powers are turning against the U.S.

Germany’s attitude toward President Trump shows it is already turning against America. But America hasn’t even come close to realizing that yet.

God says He is the one ultimately behind this trend: “All thy lovers have forgotten thee; they seek thee not; for I have wounded thee with the wound of an enemy …” (Jeremiah 30:14). In Ezekiel 16:37, God says, “I will gather all thy lovers, with whom thou hast taken pleasure … I will even gather them round about against thee ….”

Why? God explains in Ezekiel 23:35 that Israel “hast forgotten me, and cast me behind thy back.” We have rejected God. We have not trusted Him for protection, and we try to make up for that lack of protection by looking to foreign powers.

As Trumpet editor in chief Gerald Flurry wrote earlier this week, God is using President Trump to save America, temporarily. He is giving our nation one more chance to repent and turn to Him. If we do not, He will have to correct our peoples—and He will use a German-led European power to do it.

Even as God intervenes in American politics to bring some temporary stability, powerful enemies of America are rising. This stability will be short-lived. To understand more about this stability and how America can make it permanent, read Mr. Flurry’s article “Saving America From the Radical Left—Temporarily.”