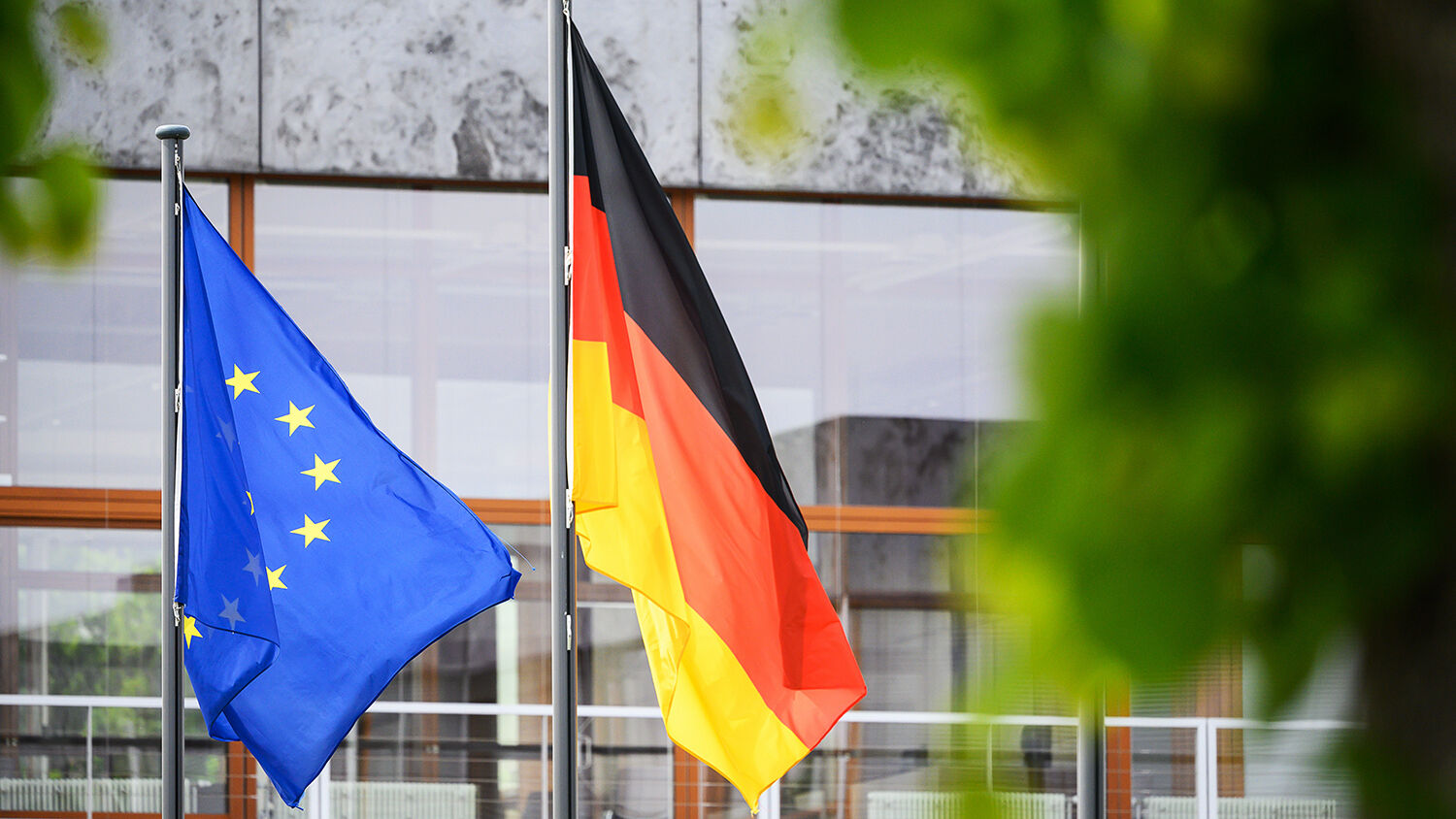 Germany’s highest court produced a surprise ruling last Tuesday that plunged the European Union into an existential crisis. And I mean existential in both ways. It threatens the EU’s survival. But it also has Europe questioning the nature of its existence. What is the EU? Why does it exist? Who ultimately runs it?

By forcing the EU to answer these questions—and giving it a hard deadline on producing the answer—the German court could accelerate a massive transformation in the Union that will have global ramifications.

“The decision has the potential to unleash a constitutional crisis in the EU’s biggest member state and, with it, the entire eurozone,” wrote the Financial Times. Project Syndicate warned that the ruling “risks sacrificing the euro and possibly even the European Union.” The Telegraph called it a “revolutionary moment for the European project.”

The question before the court revolved around the European Central Bank’s (ecb) behavior during the 2008 financial crisis. Since that crisis hit, the bank has basically been printing money and then lending that money to eurozone governments (you can read more about exactly how this “money printing” works in an article I wrote a fortnight ago). Germans saw their savings devastated by money printing in the 1930s. So, a group of financial experts and politicians challenged the printing through the German court system.

The German Constitutional Court—also known as Karlsruhe, after the city where it meets—had previously referred the matter to the European Court of Justice (ecj). But the ecj is a bit of a joke. There’s little evidence it judges the legal merits of a case. It simply rules in favor of the EU, gives more power to the EU, and then finds legal justification for it.

For 60 years, it has gotten away with that. But not this time. In what counts among lawyers as a blistering attack, Germany’s Constitutional Court ruled that the ecj had things badly wrong, so it would have to step in and take charge. The court decided that it could ignore the ecj’s ruling. The court then told the ecb that it had three months to stop money printing, convince the court to change its mind, or Germany’s central bank would have to pull out of the ecb. Losing the central bank of Europe’s largest economy would be a major blow to the eurozone and would quickly produce a crisis.

It’s easy to sympathize with the German court. The financial crisis has seen the EU repeatedly grab powers not delegated to it in any legitimate way. Lawyers are still debating the merits of the specific ruling. But the ecb’s money printing could affect hundreds of millions, and yet it has no specific democratic mandate.

But the ramifications of the ruling could be huge—and dangerous.

The End of the Euro?

The 2008 financial crisis exposed the fact that the eurozone cannot survive in its current form. A common currency without a stronger common government cannot work.

In the long run, the Italian government cannot pay its debts. But in the eurozone, it has no way of dealing with the problem. It can’t print money to inflate the debt away; it shares a currency with Germany, and Germany won’t let it do that much money printing. Such an effort would have to include much more money than is rolling off the presses today. But Germany won’t bail out Italy either. If Italy simply doesn’t pay back the debts and goes bankrupt, the ensuing economic crisis will hurt Germany badly because their economies are so closely intertwined.

The eurozone must move in one of two directions. It could fall apart, then Italy could print its own money and gradually inflate away its debts. Or it could move to become an American-style federal state.

Unlike the EU, there are many ways that American states pool resources to address a crisis. All Americans pay money into one federal pot, for example. The federal government oversees banks in all states and guarantees certain funds in an emergency. Money moves with ease around the union. There are no protests about bailing out struggling states because such bailouts happen gradually and invisibly.

The middle road the eurozone is traveling is a dead end. It will have to turn off at some point. But the EU has not reached the end of the road yet, because the ecb keeps printing money. That money printing solves nothing. But it pushes the crisis point off—and saves Europe’s leaders from making tough choices.

If Germany’s Constitutional Court succeeds in stopping the printing presses in three months’ time, it may force the crisis and, therefore, Europe’s transformation.

The ecb may be able to comply with the ruling by printing less money rather than no money at all; so, there may not be an immediate crisis. But its ability to paper over economic crises with money printing has been greatly limited.

It’s for this reason that Hans-Helmut Kotz, former board member at Germany’s central bank, suggested that this crisis could actually make the eurozone stronger. “It is now more likely that the European Union will be forced to confront the main institutional weakness of its monetary union head-on,” he wrote.

“Is this now Europe’s ‘Hamiltonian moment,’ in which it is forced to adopt a more federal—and, of course, democratically legitimized—fiscal policy?” he asked, referring to the moment when first U.S. Secretary of the Treasury Alexander Hamilton pooled the states’ debt into one lump sum. In less technical terms, he’s asking, Could this be the moment Europe becomes a superstate?

The court’s ruling also raises important questions about who is really in charge. If a German court can overrule the ecj, then why can’t a Dutch or a Polish court? If national courts start withdrawing from portions of the EU they don’t like, does the whole thing come crashing down?

“If every constitutional court of every member state starts giving its own interpretation of what Europe can and cannot do, it’s the beginning of the end,” said former Belgian Prime Minister Guy Verhofstadt.

“Germany decides. That is the message the country’s constitutional court sent to the European Union on Tuesday,” wrote Politico. “For those in the bloc who fear its biggest member is already too powerful, Tuesday’s ruling will add fuel to the fire.”

Germany was the first country with the clout and self-confidence to directly challenge the ecj this way. But it may have paved the way for others.

Because of this, European Commission President Ursula von der Leyen (who is herself German) is threatening to sue Germany. “The final word on EU laws is always spoken in Luxembourg. Nowhere else,” she said.

It’s hard to see what this would achieve. The ecj would rule that it is the top dog. The German court would disagree, and we’d be back where we started. As Bloomberg noted, “[S]he must know that an ‘infringement proceeding’ by the EU against its largest and most powerful member state would drag on forever and stand little chance of success anyway.”

Brussels needs to think carefully before it triggers a showdown with Berlin over who is ultimately in charge. It probably won’t like the answer.

Is Europe a group of sovereign nations or a superstate? Was the EU created to facilitate free trade or to found a federal superstate. That really is the question to be decided here—and all the while with the prospect of a financial crisis looming over it all.

The euro project has always been about forcing Europe to unite. Its founders knew that a common currency without a common government could not work. They thought the euro could finally force reluctant populations to accept a strong European government. That would be the only alternative to perpetual economic crises. As former EU civil servant and author of The Rotten Heart of Europe Bernard Connolly warned in 2007: “And, whereas the mission of the Fed is to avoid a financial crisis, the mission of the ecb is to provoke one. The purpose of the crisis will be, as [Romano] Prodi, then Commission president, said in 2002, to allow the EU to take more power for itself.”

In the immediate aftermath of the 2008 crisis, Trumpet editor in chief Gerald Flurry wrote that the crisis “will eventually force Europeans to succumb to a strong united government of Europe, led ultimately not from Brussels, but from Berlin” (original emphasis).

Germany’s Constitutional Court has accelerated that crisis. It could easily come in the following months. And at the same time, it is asserting Berlin’s ultimate control over the whole process of European unification.

“One of the most important effects of the global panic over covid-19 has been almost overlooked,” wrote Mr. Flurry in the July Trumpet issue. “Europe’s response to the pandemic is accelerating the fulfillment of one of the most crucial end-time prophecies of your Bible! The coronavirus is hastening the arrival of the prophesied Holy Roman Empire.”

“The Bible says 10 kings will rise in Europe in this end time, led by one overarching strongman. These kings will form the Holy Roman Empire,” he wrote. “The coronavirus pandemic is helping usher in these 10 kings!”

“Many experts will tell you that Europe is about to break apart,” he added. “If these nations’ response to the coronavirus does not cause an immediate economic meltdown, the debt they are accumulating will still come due at some point. Some kind of financial crisis is inevitable. When it comes, watch what happens! A crisis like the current one is exactly what European leaders have longed for to forge a European superstate!”

The court’s action has just brought that crisis forward.

The EU is clearly moving down the path that Herbert W. Armstrong forecast it would go in before it even started. On May 9, 1945—the day after Germany surrendered—he told his listeners that Germany would rise again as part of a “European union.”

The Plain Truth wrote in September 1967, half a century ago: “[I]f 300 million Europeans were united and could speak with one voice, this would excel any might in the world today …. One thing you can count on. In fact it is so sure you can bank on it: The cry of a political union in Europe will get louder and before long we will see the Common Market develop into a United States of Europe.”

Now a German court is setting itself up as Europe’s highest authority, and pushing the union toward becoming that United States of Europe. Mr. Armstrong’s forecasts have proved accurate because they are based on Bible prophecy.

The Bible says this Union will go on to become a true superpower—more powerful than even the United States. It will usher in a terrifying new age of force.

That is why you must watch closely for the arrival of this superstate. The Bible says that it will shake the world. But its rise is also powerful confirmation of the Bible’s relevance and accuracy in forecasting world events. Watching it rise proves that ultimately there is a God in control who has a plan for the fate of nations.