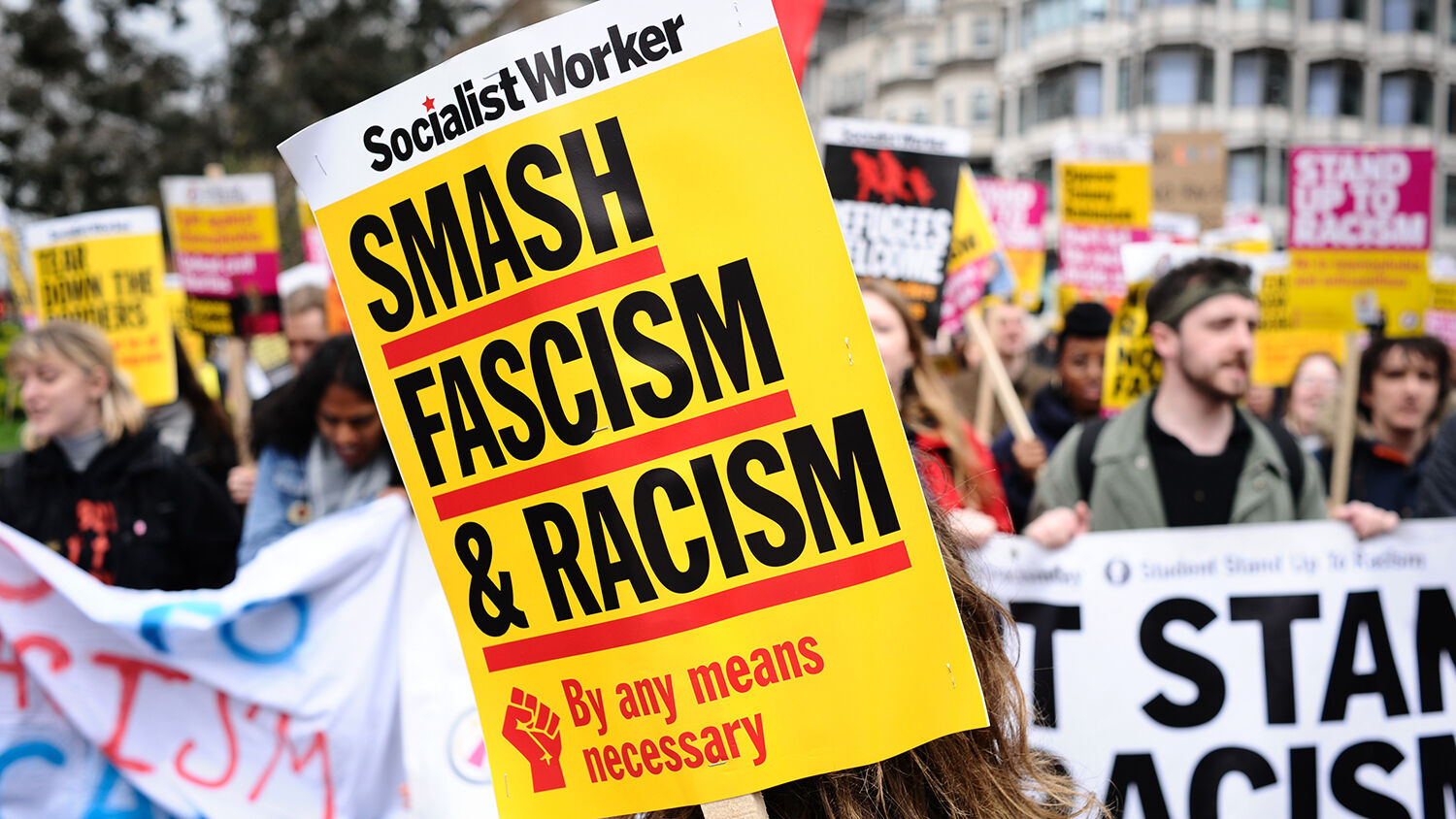 Demonstrators set off along Park Lane at the start of the 2019 anti-racism march in London, England, on March 16, 2019.
David Cliff/NurPhoto via Getty Images)

British tv personalities are talking a lot about race at the moment. “Experts” in race and gender studies have flooded onto the airways to explain that Harry and Meghan’s decision to step back from royal duties is a reaction to society’s racism.

Good Morning Britain, This Morning, Newsnight, Question Time and many more have all hosted discussions on Britain’s intrinsic racism and the nation’s sins against the part black Duchess of Sussex.

This feels like a real turning point in race relations in Britain. I’ve never seen so much mainstream coverage of the idea that the country and its institutions are fundamentally racist.

If a tv host asks for evidence of racism, he is immediately shot down. If a black person states there is racism, you must take his or her word for it. If you ask for proof, you’re questioning the life experiences of a black person and are, therefore, racist.

It’s a ridiculous view. Calling a whole society racist is a huge claim. As astronomer Carl Sagan—a figure usually revered by the left—put it, “Extraordinary claims require extraordinary evidence.” But with the new standard, there is no defense against an accusation of racism. Deny it or ask for proof, and you merely confirm it.

On Tuesday, Manchester police published a report about gang members “grooming”—i.e. raping, sexually abusing and prostituting—teenage girls. Around 100 men targeted at least 60 girls in Manchester in the early 2000s.

The report found that children were being exploited “in plain sight” and that there was “clear evidence” the girls were abused “generally by a group of older Asian men.” And by “Asian,” the report means mostly Pakistani, Muslim men.

The report said the police knew who was committing the abuse. They had their names, their addresses, where they worked. They knew what was happening. But they did nothing.

One girl, Victoria Agoglia, was being looked after by the local council after her mother died. She told authorities about how she was being raped and assaulted. No one did anything to protect her. In September 2003, she went to the home of a 50-year-old man, was injected with heroin, and died five days later in the hospital.

Maggie Oliver was a detective who resigned over the scandal and exposed a lot of what was happening. She said that “people at the top of the police and at the social services … knew the facts and chose to bury the truth.”

Why did they allow this to go on?

One detective quoted in the report said: “What had a massive input was, the offending target group were predominantly Asian males, and we were told to try and get other ethnicities.” The report said the police were “aware of sensitive community issues.” It added, “Concerns were expressed about the risk of proactive tactics or the incitement of racial hatred.”

This is just the latest in many investigations telling the same story. Up and down the country, in city after city, teenage girls have been raped and abused. And police have been reluctant to do anything because of fear of being called racist.

The results have been horrific.

A major investigation into victims in the town of Rotherham, written by Prof. Alexis Jay, found that between 1997 and 2013, about 1,400 minors were sexually exploited—and that’s a “conservative estimate.”

“It is hard to describe the appalling nature of the abuse that child victims suffered,” the report stated. Even in the dry, factual language of an official report, it is difficult reading.

The children “were raped by multiple perpetrators, trafficked to other towns and cities in the north of England, abducted, beaten and intimidated,” the report said. “There were examples of children who had been doused in petrol and threatened with being set alight, threatened with guns, made to witness brutally violent rapes and threatened they would be next if they told anyone. Girls as young as 11 were raped by large numbers of male perpetrators. This abuse is not confined to the past but continues to this day.”

“One young person told us that ‘gang rape’ was a usual part of growing up in the area of Rotherham in which she lived,” the report stated.

“The impact sexual exploitation had on them was absolutely devastating,” it read. “Many children repeatedly self-harmed, and some became suicidal. They suffered family breakdown, and some became homeless. Several years after they had been abused, a disproportionate number were victims of domestic violence, had developed long-standing drug and alcohol addiction, and had parenting difficulties with their own children.”

“Many suffered post-traumatic stress and endured lasting psychological and emotional damage that diminished their capacity to lead normal lives,” the report stated. One victim said that “sexual exploitation is like a circle that you can never escape from.”

Even the report’s author, who has investigated these kinds of atrocities before, was “shocked” at “the horrible nature of the sexual acts” and the “utter brutality” that she uncovered. “It was truly frightening that people in our country could be doing that,” she said.

The police just let this go on because, in the words of Rotherham’s member of Parliament, during that time “there was a culture of not want [sic] to rock the multicultural community boat.”

The report stated, “Several staff described their nervousness about identifying the ethnic origins of perpetrators for fear of being thought racist; others remembered clear direction from their managers not to do so.” Another report acknowledged that “not enough was done” by police to stop the gangs, and that “misplaced ‘political correctness’” slowed down their response.

This is where throwing around accusations of “racism” leads. There’s no evidence negative press coverage of the Duchess of Sussex is racist. But for the race-baiters, you don’t need evidence. They can divine the motive behind any negative coverage, and it must be racism.

You can easily see how they would have applied the same logic to Manchester. Had they dealt with this problem, they would have arrested a disproportionate number of Pakistani Muslim men for rape and sexual assault. They probably would have been branded racist for doing so. That shouldn’t have stopped them from protecting vulnerable girls. But those throwing around “racist” accusations share part of the blame for the girls’ fate. Hundreds, if not thousands, have suffered because of their “woke” approach to race.

The whole story shows our weird, upside-down priorities as a nation. The report into authorities tolerating rape in Manchester has received a tiny fraction of the coverage Meghan’s supposedly racist treatment has. As Brendan O’Neill wrote last week: “Think about this: We live in a time in which a middle-class woman’s complaint about overhearing a sexist joke or having a hand briefly placed on her knee becomes a huge scandal and can even dominate news coverage, and yet a vulnerable working-class girl can experience horrendous genuine abuse” and nobody talks about it, and authorities do little.

Part of the reason no one will talk about this, is that they’ll be called “racist” if they bring it up. Never mind that the facts of the matter have been established in government reports and been the subject of a major bbc feature and some excellent, thorough investigative reporting by the Times newspaper. The facts of the matter are not in dispute. Yet if any politician tries to address the issue, the type of people that we’ve seen on tv this past week pop up and make them a “racist” pariah.

Is this about to get worse? Maybe—though there has been so much pushback against the criticism on tv that perhaps we’re in for a short-term resurgence of common sense.

Regardless, the repeated outbreak of these kind of rape gangs is a symptom of our sick society. This is why we really need to talk about racism. This whole sorry saga exposes major problems in society. And it helps point to the real solution.

“[T]he whole head is sick, and the whole heart faint”—that is God’s description of today’s society. “From the sole of the foot even unto the head there is no soundness in it; but wounds, and bruises, and putrifying sores: they have not been closed, neither bound up, neither mollified with ointment” (Isaiah 1:5-6). Britain has completely failed to protect some of its most vulnerable children. Can we describe that any other way than putrefyingly sick?

The criminals who committed these crimes are sick. But so are the authorities who covered it up and looked the other way, as well as the media and public officials who will organize a lynch mob over an insensitive tweet but show no anger over the mistreatment of thousands of girls.

Here at the Trumpet, we do a lot to warn about the nations God is raising up to punish Britain and America. Accounts like the Manchester police report show us why our nations need to be punished.

In the same chapter, God warns: “Your princes are rebellious, And companions of thieves; Everyone loves bribes, And follows after rewards. They do not defend the fatherless …” (verse 23; New King James Version). Many, if not most, of the girls that are victims of these attacks are fatherless. In Rotherham, about a third of the victims were in social care—being looked after by the state because their parents were dead or incapable of looking after them.

What an accurate condemnation of society today. We care more about looking “woke” and progressive on social media than we do about protecting orphans from sexual predators.

Why this sick society? Verse 3 states: “The ox knows its owner, and the ass its master’s crib; but Israel does not know, my people does not understand” (Revised Standard Version).

This is the root of the problem: We don’t know God. In fact, we reject God; we “revolt more and more” (verse 5).

As a society, we loudly revolt against God’s standards of morality and, instead, uphold our own. Our current standards make calling someone by the wrong gender a more shocking crime than rape. The further we drift from God, the more absurd our own standards become.

The real, permanent solution to our sick society is to return to God.

That’s the solution for individuals too. As society continues to move away from God, you can fix problems in your life by turning to Him.

To learn more about how you can solve the problems in your life and how you can play a part in God’s plan to heal this sick society, watch our video “What Should You Do Now?”