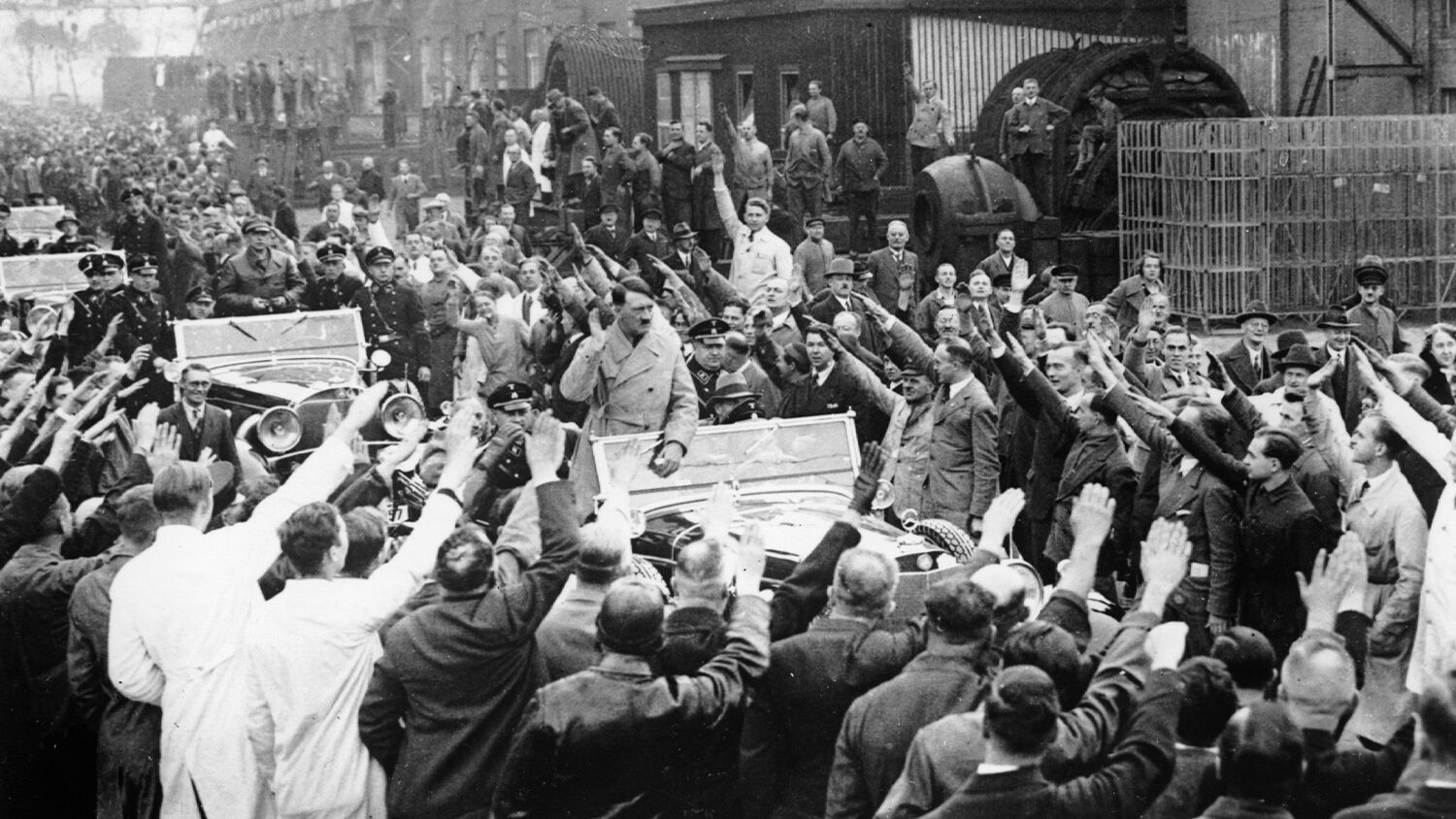 German dictator Adolf Hitler leaving the Siemens works, after making his final speech prior to the 1933 German election.
Keystone/Getty Images

On this day in 1933, a vicious cycle came to an end. Germany held its final election before World War ii. The Nazi party won 92 percent of the vote—which is hardly surprising as it was the only party allowed to run. A process that began with inconclusive elections in 1928 ended with a Nazi dictatorship five years later.

Europe is clearly and provably on the same path today.

You can look back at the rise of the Nazis and see fringe parties rising across Europe today in exactly the same way.

Here’s the pattern: An economic crisis hits, causing people to lose faith in the established parties. The mainstream consensus got it wrong, so a few start to support more extreme parties.

This shift in support means mainstream parties can’t get a majority. The mainstream right, for example, must either form a coalition with an extreme party, or reach out to its opponent on the mainstream left.

Now the death spiral kicks in. A left-right coalition struggles. The two sides fundamentally disagree and cannot take bold action. It draws the mainstream parties together—toward the center. And so more voters reject the mainstream and embrace the extreme.

Or if the extreme is brought into the government, the fringe party is normalized. Voters who would once have been put off by its extreme status now embrace it. Either way, the fringe grows in power.

This makes it even harder to form stable coalitions. Problems get worse; support for the extreme grows.

This is exactly what happened in 1930s Germany.

In 1928, the Nazi party came in ninth with only 2.6 percent of the vote. The Communists did four times better, with 10.6 percent. But this level of support was enough to start the spiral. No one could form a stable coalition. A grand left-right coalition got together, and barely lasted two years before it fell apart.

In the next election, the fringe did much better. The National Socialists won 18.3 percent and became Germany’s second-most popular party. The Communists were third, with 13.1 percent.

The rise of the fringe meant no one managed to get a majority in parliament. For two years, Germany limped along with a president and a minority government, until fresh elections were held in July 1932. The elections solved nothing; no one could form a coalition. As a result, they held elections again in November.

Support for the Nazi party rose with almost every election. By the end, Adolf Hitler was powerful enough to take over. The Nov. 12, 1933, election cemented his rule.

The latest election results from Europe show the Continent is on the same path today.

Germany has spent the last six years in a left-right coalition—while support for mainstream parties collapses. After the last national election in 2017, the coalition negotiations took so long they set a new record.

In the most recent local elections, in Thuringia on October 27, extreme parties gained most of the vote. Die Linke, or the Left, the successor of East Germany’s brutal Communist regime, came in first place with 31 percent. The Alternative für Deutschland, the new far-right party, came in second place, with 23.4 percent. One of these two must be included in any coalition for them to have a majority in the state parliament.

Meanwhile, Spain showed that its politics have broken down over the weekend. Its election results clearly follow the same death spiral. Spain held inconclusive elections in December 2015. No one managed to form a government, so it held new elections in June 2016. Politicians managed to cobble together a weak coalition, but it fell in 2018. Another coalition rose up and limped on for a little longer, until the nation held fresh elections in April this year. Again, no one could form a government, so it held fresh elections on Sunday. And still there is no clear coalition.

It’s hard to see how Spain can ever get back to having a functioning democratic government. It is divided between left and right—but it has the added complication of separatism. Some regions like Catalonia have strong independence movements. Some political parties want to clamp down hard on any separatism, while others believe the best approach is to allow the different regions a lot of local autonomy. Any faction will struggle to get a majority.

The only clear victor in Spain is the far right—in the form of a party called Vox. It entered Spain’s parliament for the first time in its democratic history in the April election, with 10 percent of the vote. This time, it catapulted into third place, winning 15 percent of the vote and more than doubling its number of seats in Spain’s congress.

And these are just examples from the last few weeks.

In May, European Parliament elections clearly showed the same trend hitting all of Europe.

For decades, the European Parliament has been dominated by two political groupings: the center-right European People’s Party and the center-left bloc, Progressive Alliance of Socialists and Democrats. Combined, these two have controlled the majority of seats in the Parliament since it was established in 1979. In May, they lost it.

Eastern Europe is full of governments that are right wing, if not far right, and most of these did well. In Hungary, Viktor Orbán’s Fidesz won 52 percent of the vote, one of the only parties in Europe to win a majority. In Poland, the right-wing Law and Justice party garnered 45 percent of the vote.

Some experts are deeply alarmed by these trends.

In the wake of Germany’s local election, Charlotte Knobloch, former president of the Central Council of Jews in Germany, said the AfD’s success “shows that our whole political system is coming apart at the seams.” She said she was worried that so many supported a party that has “downplayed the horrors of the Nazi era, who are openly nationalistic and have spread messages of hate against minorities, including the Jewish community.”

Christoph Heubner, vice president of the International Auschwitz Committee, sounded a similar warning, saying, “For survivors of German concentration camps, this massive increase in votes for the AfD in Thuringia is another menacing signal that right-wing extremist attitudes and tendencies are consolidating in Germany.”

“The last time we saw something of this kind in Germany was in the Weimar Republic where political life was polarized between the Communists and the National Socialists,” political scientist and commentator Werner Patzelt told the Local. “This is quite uncommon.”

In an interview with Spiegel published last week, geopolitics expert Robert Kagan warned that pushing Germany to become a major military power right now is “a big gamble.” He warned that “the fate of democracy as a common European ideology” is now “in question.”

“One of the most important elements of the European project after World War ii has been the suppression and control of nationalism,” he said. “And we now see nationalism returning.”

“Do you really think there is a danger of Germany once again becoming a threat to its neighbors?” his interviewer asked. Kagan made clear that he does. “I think you really have to be an unwavering optimist to believe that Europe will stay stable and peaceful without the support of the United States,” he said. “You can’t compare the EU of the late 1990s to the EU of today.”

Europe is changing before our eyes. More people should be alarmed by it. It is changing in the same way that it changed in the late 1920s and ’30s.

That doesn’t mean that events will play out in exactly the same way. In Austria, Sebastian Kurz, for example, has found a way out of the death spiral by pivoting to the right, taking over most of the far right’s talking points while still looking moderate and reasonable. Europe’s new nationalist figures could look more like Kurz than Hitler. But the trend is still clear.

History, and these experts, is sounding the same warning the Trumpet has proclaimed since its beginning in the early ’90s. For decades prior to that, Herbert W. Armstrong sounded the same Bible-based warning.

In 1950, for example, Mr. Armstrong warned that European nations are becoming “distrustful of America and thinking more and more about uniting themselves into a united states of Europe.” To do that though, they needed a “new supreme leader—the successor of Adolf Hitler—to rise up and assert himself and take command.”

He delivered this same warning for decades. Even in 1985, the final year of his life, he wrote, “There is yet another leader to arise in Europe!”

He made these warnings because of Bible prophecy. Daniel 8:23, for example, warns, “And in the latter time of their kingdom, when the transgressors are come to the full, a king of fierce countenance, and understanding dark sentences, shall stand up.” The book of Revelation describes the rise of this empire—with one emperor ruling over 10 kings under him.

“This soon-coming ruler could literally be called a king,” wrote Trumpet editor in chief Gerald Flurry at the start of the year. “Even if he is not, the Bible gives him that title. When the Bible talks about a king, in most cases it is not referring to a democratic government. Even if this man doesn’t have the title of ‘king,’ he will lead like an absolute monarch, like an authoritarian king right out of the Middle Ages. Daniel’s vision shows that the leadership of Europe is about to become a lot more authoritative. It’s not hard to imagine this happening, considering the growing appetite within Germany and Europe for exactly this type of leadership.”

We’ve been forecasting this massive change in European politics for decades. You can see this change coming just by looking back a few decades into history.

This change is one of the most pivotal trends to watch. It shows you future events in Europe that will rock the world. But Bible prophecies about this empire also contain an important message about what God is doing on Earth right now—and what He plans to do in the future.

You can learn more about this leader and God’s plan in Mr. Flurry’s article “Germany—A New King Is Imminent.”