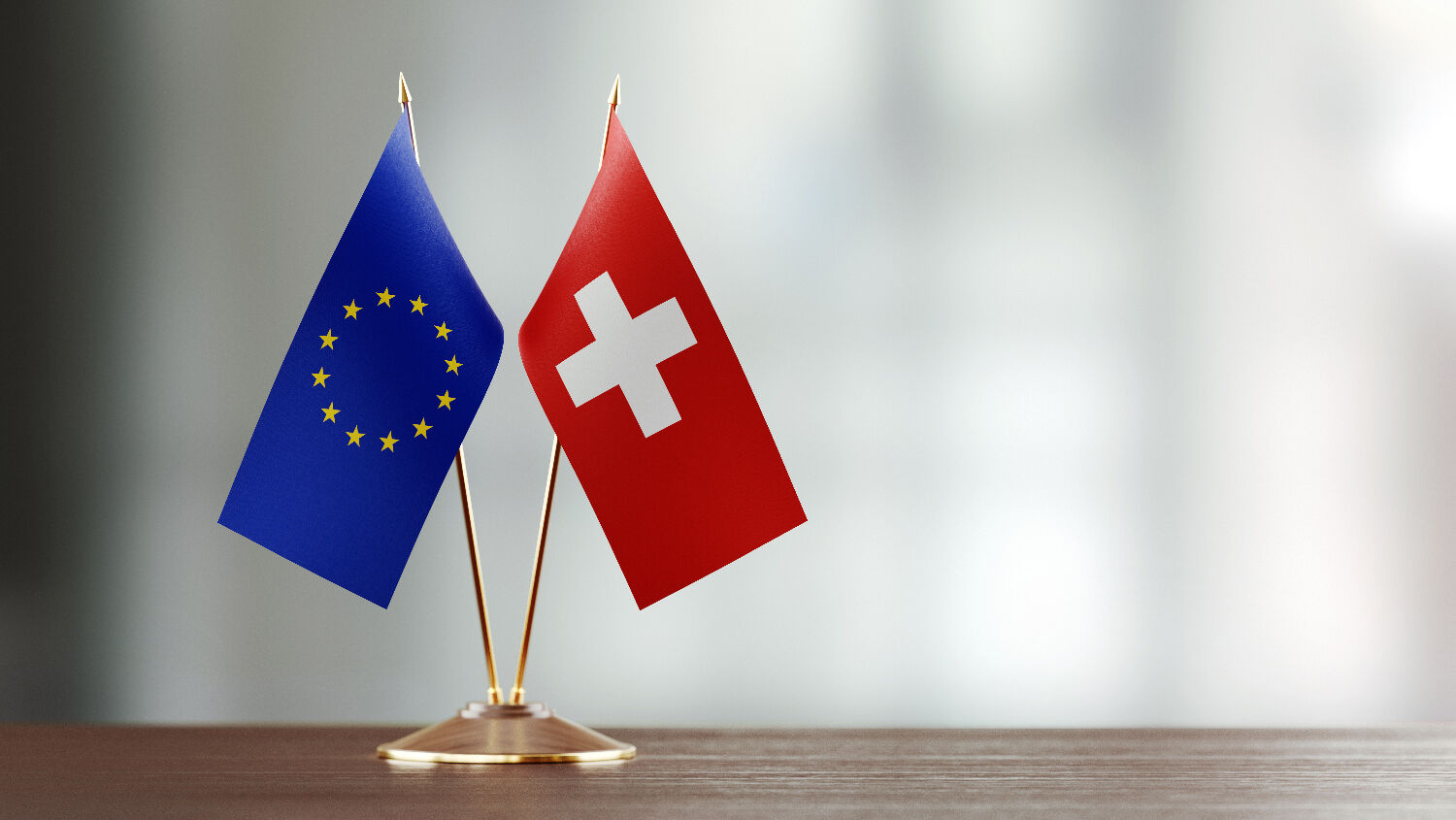 The European Union is besieging Switzerland—and it will have global implications.

The European Union has always hungered for control, but recently we have seen a growing boldness to crack down on anyone who dares to disagree with it. The EU’s war against Switzerland is just one example of its appetite for authority.

So what’s going on with Switzerland?

Switzerland has often been the exception in Europe. It is not an EU member nation. It is independent minded. Being neutral is kind of its thing—it remained neutral through both world wars. But it is completely surrounded by the EU, so Switzerland has to have some relationship with Brussels.

Instead of joining the EU as a member, Switzerland has signed around 120 agreements with the bloc to make it easy to trade with Europe.

But now that’s not enough.

Over the last few months, the EU has decided that it is time for Switzerland to submit to certain EU laws, including any relevant laws the EU may pass in the future. EU bureaucrats call this “dynamic alignment.” The EU also wants the Swiss to submit to the European Court of Justice in certain areas—a court so creative in its interpretation of the laws that it makes Ruth Bader Ginsburg look like a constitutional originalist. European Court of Justice rulings are based not upon the rule of law, but upon whatever the EU wants the law to mean at that point in time.

The EU has wanted to dominate Switzerland for a long time. Almost 10 years ago, Jean-Claude Juncker, now president of the European Commission, said: “It remains a geostrategic absurdity that we have this white spot on the European map.”

However, the EU allowed Switzerland its half-in, half-out arrangement. Now the Union feels strong enough to force the Swiss to comply. This will also send a message to the United Kingdom: The EU is finished with compromise deals. It is all or nothing.

Just as in Britain, Swiss elites are ready to submit to the EU, but the citizens are fighting back. Swiss law prohibits its leaders from such a drastic surrender of power without a referendum. The elites know that the people will never capitulate on this. One recent poll found that 20 percent of Swiss backed the EU’s “deal,” while 67 percent were against it.

The Swiss People’s Party (svp) stated that the EU demand for dynamic alignment “is a wholesale assault on the rights of the people and the prerogatives of parliament and the cantons. It is a massive limitation of popular democracy.”

But as Switzerland resists, the EU is ramping up the pressure. It is gradually besieging Switzerland into submission.

At the start of this month, the EU blocked European companies from trading on the Swiss stock exchange. Trading shares of Nestle, a Swiss-listed company, within the EU could now land you in jail. Instead of caving in, Switzerland fought back: It banned the trading of Swiss shares in EU markets.

In this struggle, the EU has been explicit. This is not about some regulation designed to protect EU markets. This is a punishment on Switzerland for resisting the dynamic alignment “deal” from Brussels.

Some predicted disaster for Swiss financial markets, but that hasn’t happened yet. However, the EU is ramping up the pressure in other areas.

[T]he clash with Brussels will become increasingly painful as the pressure ratchets up. The EU is determined to shut down the idiosyncratic “Swiss model.” It aims to bring the country within its legal and regulatory control once and for all under a new framework agreement.

This means suspending 120 bilateral accords one by one as they fall due, progressively shutting the Swiss out of the EU’s economic, transport and political system until they capitulate. It amounts to a sanctions regime.

“Energy access for Switzerland is slowly deteriorating,” Pritchard quoted Prof. Paul van Baal from Lausanne’s Polytechnique Fédérale as saying. The EU is making it harder for Swiss firms to sell electricity to the rest of the EU.

“In theory the EU could cut off access to almost anything,” said Pieter Cleppe from Open Europe in Brussels, according to Pritchard. “It is a worrying precedent that a country can be cut off like this for purely political motives when it has not violated its obligations.”

These are small steps, but Europe is gradually increasing the pressure. Evans-Pritchard continued:

This David and Goliath struggle can end only one way. The Swiss will eventually have to sign on the dotted line or face asphyxiation.

But the EU risks paying a high diplomatic and moral cost before that point is reached. It will be accused of bullying a small country and displaying a chronic inability to coexist with any of its near abroad.

Article 7 of the Lisbon Treaty states: “The Union shall develop a special relationship with neighboring countries, aiming to establish an area of prosperity and good neighborliness, founded on the values of the Union and characterized by close and peaceful relations based on cooperation.” The EU says it wants peaceful cooperation, but this is not in its nature.

Why is the EU so keen to bully little Switzerland? It all gets back to its fundamental desire to dominate. In the July issue of the Trumpet, editor in chief Gerald Flurry wrote about the EU’s attempts to dominate in “Germany Is Taking Control of the Internet.” He wrote:

The EU is about the Germans ruling more than just Germany: They want an empire! They want to control the Internet—and that is only a stepping-stone to controlling the world! Every time it has risen, the Holy Roman Empire has made an attempt to do just that! These Internet regulations show that the spirit of Charlemagne has returned.

In his article, Mr. Flurry focused on Germany’s push to regulate the Internet as an example of its much broader desire to control—it exposes the spirit, the true nature, of this European power. The desire to dominate Switzerland is another example.

To fully understand the nature of the power rising in Europe, we have to turn to the Bible. Many scoff at the idea that the Bible can tell us about world news. But in the book of Daniel, God gives an overview of thousands of years of world history. These prophecies of historical figures, such as Alexander the Great, are so accurate and clear that critics insist they must have been written after those events occurred.

But the book also describes the empire that followed Alexander. Daniel 7:7 describes a symbolic beast that is “terrifying, dreadful, and very strong. It devoured and crushed its victims with huge iron teeth and trampled their remains beneath its feet” (New Living Translation). This is a prophecy of the Roman Empire.

God describes this fourth beast of Daniel 7 as having 10 horns. These, the Bible says, “are ten kings [or kingdoms] that shall arise” out of this beast (verse 24). This means that the beast will be resurrected 10 times. Europe’s rising dominance is the beginning of the final resurrection of the Roman Empire.

Describing the world powers listed in Daniel 7, Mr. Flurry writes in his free booklet Daniel Unlocks Revelation, “These are dreadful beasts that conquer and enslave entire nations. It’s what these beasts do.” Britain and America like “to think of them as harmless wild animals,” he continued. “They fear to face the extremely unpleasant truth.”

The fourth beast, the Roman Empire, is emphasized in Daniel 7 for its strength and destructive power. “The Roman Empire is the most vicious beast this world has ever known,” writes Mr. Flurry. “It is the greatest monster human beings have ever seen.”

What the EU is doing in Switzerland right now is a relatively mild display of its nature. But it will keep rising and keep pushing and keep trying to dominate.

All the way back in December 2001, the Trumpet forecast what would happen to Switzerland. In “Why Switzerland Will Not Remain Neutral,” Gareth Fraser explained that the Swiss are the primary descendants of Gad, a tribe of ancient Israel. Britain descended from the tribe of Ephraim. (To prove these identifications, please order your free copy of The United States and Britain in Prophecy, by Herbert W. Armstrong.)

Genesis 49:19, gives an overview of Gad’s future: “Gad, a troop shall overcome him: but he shall overcome at the last.” Jamieson, Fausset and Brown Commentary writes the following about Gad: “This tribe should be often attacked and wasted by hostile powers on their borders.”

For centuries, hostile powers did overrun Swiss borders. Swiss history is replete with outside forces dominating its soil.

Bible prophecy reveals the very intention of Gad’s neutrality has been to prevent future ravaging at the hands of dynasties, empires and dictators. But though the Swiss can run, they can’t hide. The illusion of neutrality will not preserve them from the aspirations of Europe’s Holy Roman Trojan horse—the increasingly federalist European Union.

For the Swiss, it is already too late—they just don’t realize it yet.

The EU’s masterful step-by-step strategy of extracting economic, political and military cooperation from its subjects has worked on Switzerland. If the Swiss think they can play neutrality games with the EU, they are gravely mistaken. They escaped two world wars, but they shall not escape the third. …

As a tribe of Israel which has received precious blessings of God, Switzerland will be given the opportunity to turn back to Him. Ahead of acquiring wealth and material prosperity, the Swiss must seek after the true riches and wealth that only come from unbending obedience to God’s inexorable law.

Continue to watch as the EU exerts more pressure on Switzerland until it forces it into submission. Soon other countries will feel the pressure of EU domination as well. To understand this spirit of domination that is once again rising in Europe, please order your free copy of Who or What Is the Prophetic Beast?, by Herbert Armstrong.