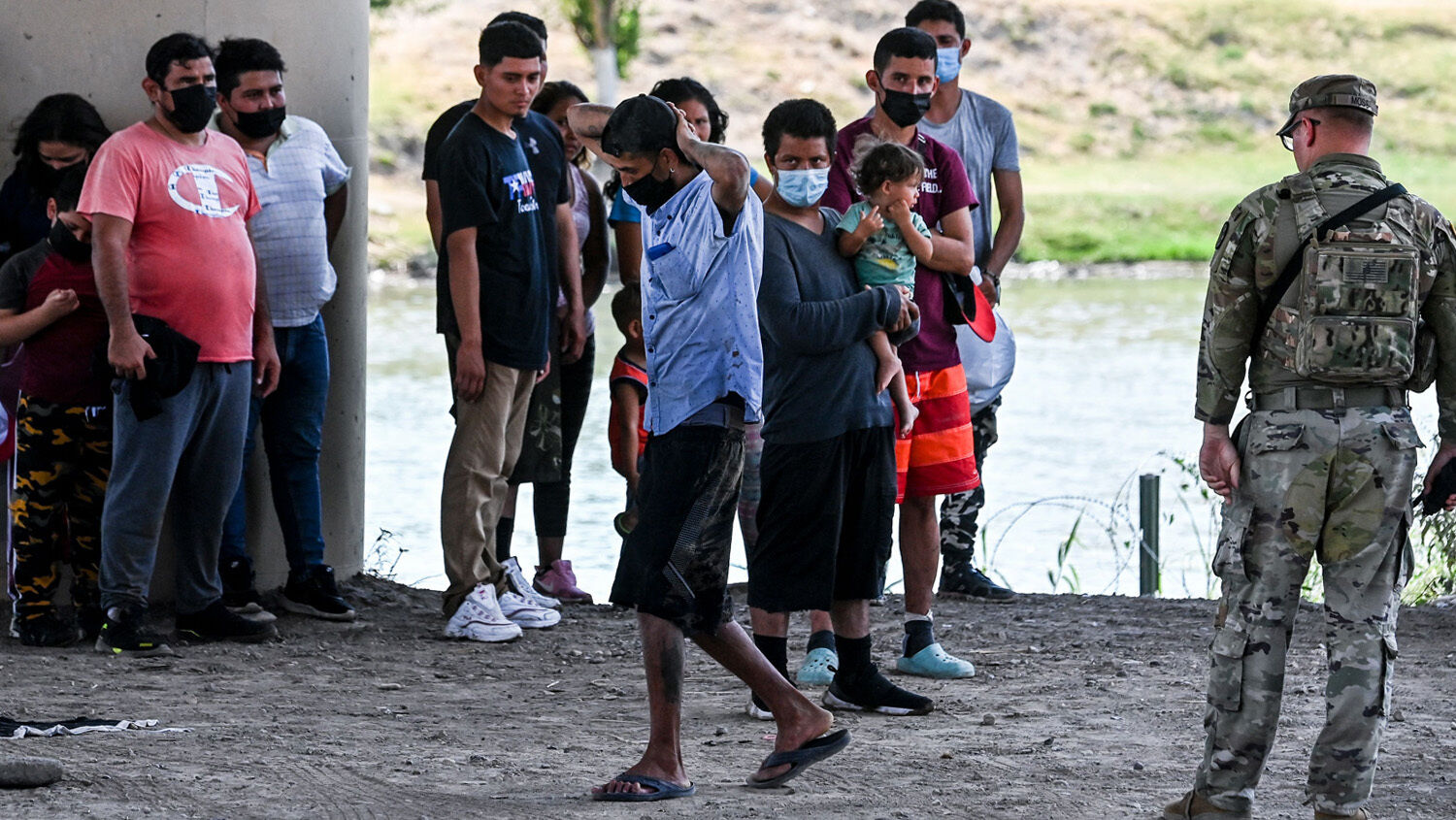 Migrants are apprehended by U.S. Border Patrol and National Guard troops in Eagle Pass, Texas, near the border with Mexico on June 30.
CHANDAN KHANNA/AFP via Getty Images

The migrant crisis is a harbinger of much bigger problems to come.

Just weeks after the Texas Republican Party rejected Joe Biden’s election as illegitimate in their 2022 platform, Texas Gov. Greg Abbott is invoking emergency measures to save his state from illegal immigrants. With millions of people from more than 160 countries crossing America’s southern border, Governor Abbott issued an executive order on July 7 authorizing both the Texas National Guard and the Texas Department of Public Safety to arrest immigrants crossing the border and deport them back to Mexico.

“While President Biden refuses to do his job and enforce the immigration laws enacted by Congress, the state of Texas is once again stepping up and taking unprecedented action to protect Americans and secure our southern border,” Abbott said in a press release. “The cartels have become emboldened and enriched by President Biden’s open border policies, smuggling in record numbers of people, weapons and deadly drugs like fentanyl.”

Normally, only the federal government is authorized to enforce immigration law, but Abbott has cited Article iv, Section 4 of the United States Constitution as his authorization. It says, “The United States shall guarantee to every state in this union a republican form of government, and shall protect each of them against invasion; and on application of the legislature, or of the executive (when the legislature cannot be convened) against domestic violence.”

According to Abbott’s executive order, Biden’s refusal to protect Texas from invasion “has forced the state of Texas to build a border wall, deploy state military forces, and enter into agreements as described in Article i, Section 10 of the U.S. Constitution to secure the state of Texas and repel the illegal immigration that funds the cartels.” Many legal analysts believe this is a misinterpretation of the U.S. Constitution, but the crux of the legal case hinges on whether or not the migrant crisis on America’s southern border constitutes an “invasion” under constitutional law.

Many Texans definitely believe the border crisis is an invasion. Sheriff Roy Boyd from Goliad, Texas, recently told the Epoch Times that he’s never seen a border crisis so bad or border-related crime so egregious. “It’s a movement of individuals from Third World countries, all over the place, into our country,” he said. “But the farther you get into it, the more you realize it’s all done by design—and it’s at the design of the federal government. We’re in a transformation of America from a free republic to moving to something that’s more of a Marxist state.”

The fact that Biden’s Department of Justice is investigating Abbott’s executive order as a possible violation of the 1964 Civil Rights Act instead of stepping up to enforce America’s laws itself only confirms what many Texans suspect: that the border crisis was designed to transform America from a free republic to a Marxist state.

Trevor Loudon, a communism expert and contributor to the Epoch Times, has noted that the international Communist movement’s main enemy is the United States and that it only takes an additional 15 million to 25 million Communist voters to ensure Democratic control of the U.S. Governor Abbott’s decision to deploy 10,000 officers and soldiers to defend the border messes with Biden’s plan, so Biden is likely to mess with Texas.

When states start invoking Article iv, Section 4 of the U.S. Constitution, you know secession and civil war are real possibilities. In his article “What Will Happen After Trump Regains Power,” Trumpet editor in chief Gerald Flurry explained that President Donald Trump was the legitimate winner of the 2020 election. He further said that the Bible prophesies Trump’s return to power, yet he “will have to fight for it. It doesn’t have to be military action, but it certainly could. President Trump could also lead some states to secede from the union.”

There is no constitutional methodology for overturning a certified electoral college vote, but undeniable evidence of election theft is emerging, and the largest Republican state is taking measures to enforce laws the federal government won’t enforce. Could President Trump lead some states to secede? It is a distinct possibility.

These forecasts are based on Bible prophecy. Mr. Flurry explained that President Trump is a type of King Jeroboam ii in 2 Kings 14:26-28, which state: “For the Lord saw the affliction of Israel, that it was very bitter: for there was not any shut up, nor any left, nor any helper for Israel. And the Lord said not that he would blot out the name of Israel from under heaven: but he saved them by the hand of Jeroboam the son of Joash. Now the rest of the acts of Jeroboam, and all that he did, and his might, how he warred, and how he recovered Damascus, and Hamath, which belonged to Judah, for Israel, are they not written in the book of the chronicles of the kings of Israel?”

God used President Trump to save America from the radical Marxist forces seeking to destroy it six years ago, but the campaign to transform America from a free republic to a Marxist state is stronger than ever. President Trump will have to fight and war to recover the office stolen from him during the 2020 presidential election. The Texas Republican Party recognizes that Biden is an illegitimate president and will likely be a strong ally of President Trump. But Governor Abbott’s courageous stand may also be a herald of oncoming conflict.

To understand these amazing prophecies more fully, please preorder a free copy of our new, significantly expanded America Under Attack, by Gerald Flurry.